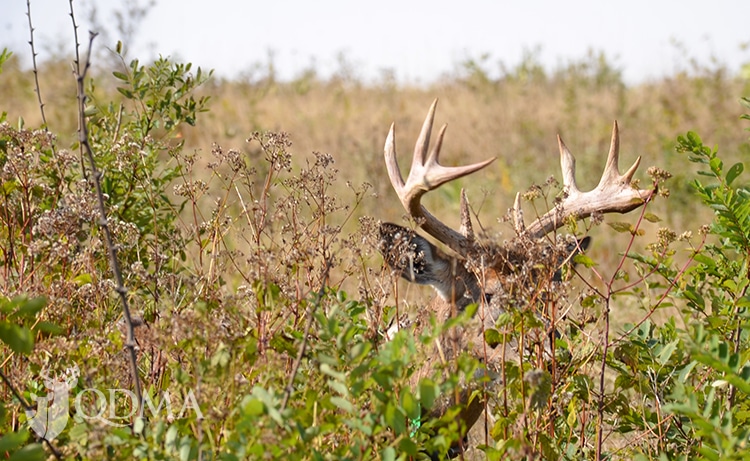 Young forest is an important cover type for whitetails. The dense thickets of shrubs, weeds, vines, seedlings and saplings in a young forest provide ample food and cover. For some, creating these conditions could be as simple as a single, strategic clearcut in your woods, or simpler yet, stop mowing that old field and allow natural succession to take its course. For others, the word “simple” cannot be used to describe this endeavor. If you are looking to create young forest, you will want to consider some factors that can hinder your success. Here are the big three.

Allowing light to reach the ground level is necessary for seeds to germinate in the soil, and for seedlings and saplings to develop. However, there are other plants that will respond to this. No matter where you are, it is likely that you won’t have to travel far to find an invasive exotic plant that will quickly take over if allowed to grow unchecked. There are also native plants that behave this way and, because of their ecology, are considered by some to be invasive despite falling within their native range.

If like myself you are from the northeast, you have probably seen a woodlot that has become overtaken by American beech. Beech is native to the eastern US, but when affected by beech bark disease they die off, and sprouts emerge in large numbers from their root systems. As these sprouts grow, they too become infected and, upon their death, more root sprouts emerge. Because of beech’s tolerance to shade, a dense beech understory may develop under a closed canopy over the course of many years. Because of the dense shade cast by beech, other seedlings do not become established.

One of the most important steps in addressing this issue is identifying and removing interfering plants before trees are cut, or before that old field is left to progress on its own. It may be necessary to continue to control these plants even after you have begun creating young forest, but dealing with them up front will save you time and aggravation in the long run.

Having browse available where deer can reach it is one of the desirable results of creating young forest habitat. If we consider that the seedlings on the forest floor will not all survive simply because of competition, it is reasonable to conclude that we can afford losing some to the deer. However, when the browsing pressure is too great, a new generation of trees may not develop at all.

To make things difficult, deer often prefer to eat the seedlings that we would prefer to grow. Maple, cherry, and birch will often be among the first casualties. When high deer densities are combined with invasive plants, those invasive plants may be all you are left with because deer won’t eat them. When undesirable plants are controlled but the deer are not, bare ground may be the result.

Ideally, using good herd monitoring and management techniques will keep the local deer population at a level that can be sustained without habitat degradation. Because this is not always possible for an individual, deer fencing may be necessary to ensure the development of a younger age class. Another good way to help seedlings develop in your young forest is to leave behind tops of trees felled during logging, and to leave them eight to ten feet high rather than lopping them to the ground level. This will not be as pretty as a property where tree tops were lopped down low after being logged, but it will keep deer away from some seedlings while allowing them to browse what they can reach.

A timber harvest, even when done correctly, will leave the woods looking uglier than it did before. If you live in an area where logging is part of the way of life, this may not be an issue that you face. For others, the visual quality of their property is not something worth sacrificing, and local attitudes toward timber harvesting could make habitat stewards seem like black sheep.

Communicating effectively to help other stakeholders differentiate regeneration efforts from exploitation is vital in gaining their trust and confidence (or better yet, getting them involved!). Making sure to account for interfering plants and deer browsing will allow you to say “Told you so!” as your rough-looking clearcut becomes lush with young trees and begins to attract deer.

Tim Russell is a certified forester with Green Fire Forestry & Wildlife Services of Pitcher, New York. He formerly served as QDMA’s Young Forest Specialist in New York. Tim earned his forest resources management degree from SUNY-ESF and previously worked as a forest technician at Forecon Inc. and F&W Forestry Services, where he marked and scaled timber, inspected logging operations and conducted forest inventories. He and his wife, Amy, reside in Cortland, N.Y.