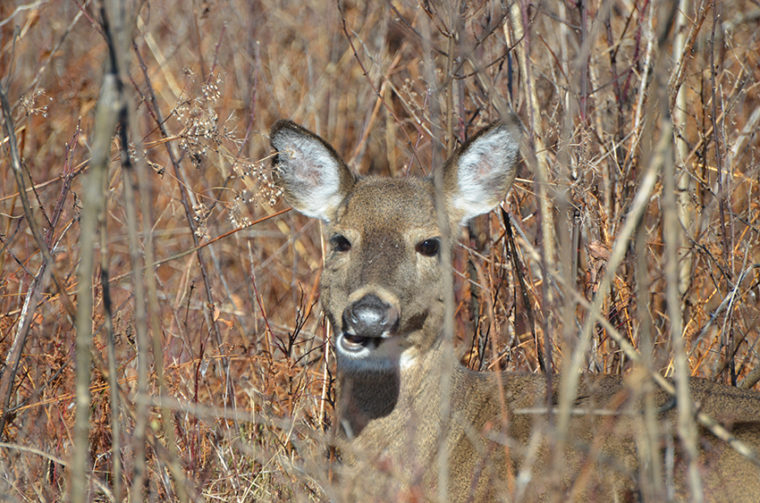 There’s still much we do not know about chronic wasting disease (CWD), but we uncover new secrets annually and provide managers with new insights to better manage deer herds afflicted with this devastating disease. One fact is becoming more prominent: Even though bucks contract CWD at higher rates than does, it is a mistake to focus the majority of disease management efforts on the bucks in a disease zone. Here are four reasons why we should not forget about the does.

Research by Daniel Grear from the U.S. Geological Survey’s National Wildlife Health Center in Wisconsin shows how genetic relatedness and deer social behavior affect CWD transmission among individuals and impact management strategies. In short, deer are very social with a lot of interaction among related individuals. Much discussion on managing the spread of CWD focuses on yearling-buck dispersal, when young bucks scatter from where they were born to establish their adult home ranges. However, Daniel’s data showed that does were 10 times more likely to be CWD positive when there was one CWD positive relative nearby. 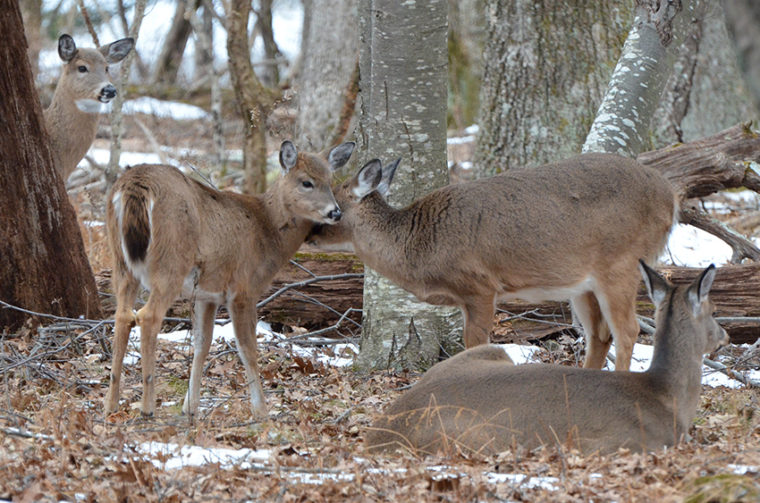 Groups of related does are tightly knit and highly social. An individual doe is 10 times more likely to acquire CWD when there is a CWD-positive relative in its home range.

This has huge implications for how we manage CWD. Rather than being solely focused on buck harvest for fear of yearling bucks spreading the disease, I believe we need a much larger focus on antlerless harvest to keep deer herds in balance with the habitat and to keep doe family groups from becoming reservoirs for CWD.

2. Dispersal is Not Just a Buck Thing

Numerous research projects have determined 50 to 75% of yearling bucks disperse 1 to 5 miles from their birthplace when they are 12 to 18 months old. This is one reason some experts recommend increased harvest of young bucks: kill them before they disperse and spread the disease.

At a time when wildlife agencies are asking for increased harvests, a declining hunter base is shooting fewer deer per hunter.

Research in Southeastern Minnesota by the Department of Natural Resources (DNR) is looking at natural deer movements to learn about potential pathways of CWD spread by infectious deer. Preliminary results from the DNR study show about half of the monitored yearlings made one-way, long-distance movements in spring 2019. That included 10 of 22 bucks (45%) and 15 of 34 does (44%)! The median straight-line dispersal distance was about 7 miles for bucks and almost 6 miles for does. These rates of dispersal and median dispersal distances were comparable with their results from 2018. So, at least in Minnesota, yearling bucks are dispersing and potentially spreading CWD, but yearling does are too. Let’s not forget about the does.

Wisconsin DNR has some excellent graphs showing the CWD prevalence rates in adult and yearling bucks and adult and yearling does (see one of them below). From these it is easy to see adult bucks have the highest prevalence rates of the disease. However, what’s often missed is the actual number of CWD-positive animals on the landscape. That’s the number most important from a deer management perspective. 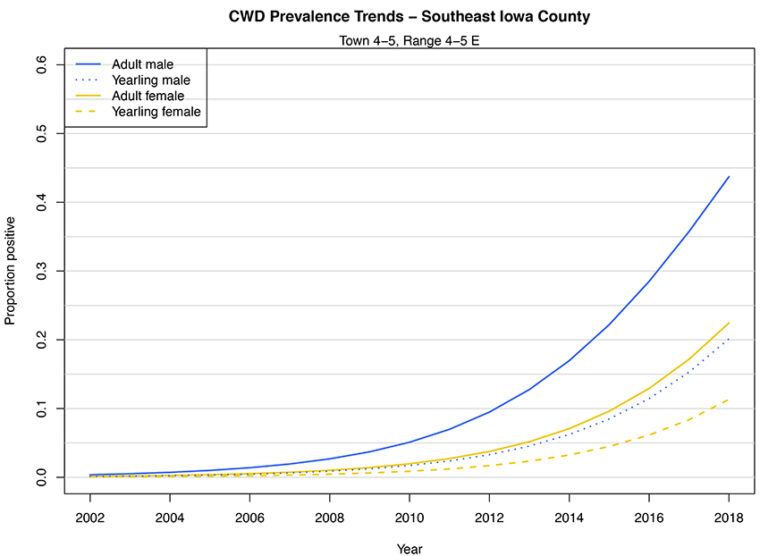 The graph above shows an adult buck prevalence in Southeast Iowa County of about 44% in 2018 and an adult doe prevalence of about 23%. Thus, adult bucks are about twice as likely to have CWD in this Wisconsin county. This has resulted in management suggestions to focus the majority of harvest effort on bucks. What many lose sight of, however, is that even though an individual adult buck is about twice as likely to have CWD, there are more than twice as many adult does than adult bucks in Southeast Iowa County – and in the vast majority of the whitetail’s range. So, even though prevalence is higher in bucks, there are more CWD-positive does on the landscape. If you want to remove the most CWD-positive animals, you can’t focus the majority of harvest effort on bucks. The same goes for educating hunters and the public about CWD. Let’s not forget about the does.

It’s an undeniable and unfortunate fact that hunter numbers are declining. This is occurring at a time when several state wildlife agencies are asking hunters to shoot more deer in disease management areas. Shooting more deer sounds great, but it’s simply not happening in most places. During the 2017 hunting season, only 41% of hunters in the United States successfully harvested a deer. That was down from 48% of hunters in 2011. So, in any given year, less than half of the hunters are successful. Even more concerning is only 15% of hunters shot more than one deer in 2017.

At a time when wildlife agencies are asking for increased harvests, a declining hunter base is shooting fewer deer per hunter. Combined with an increased focus on bucks in disease-management zones, this means fewer adult does are harvested, and the number of CWD-positive animals on the landscape continues to climb. This is absolutely the wrong management approach to employ. 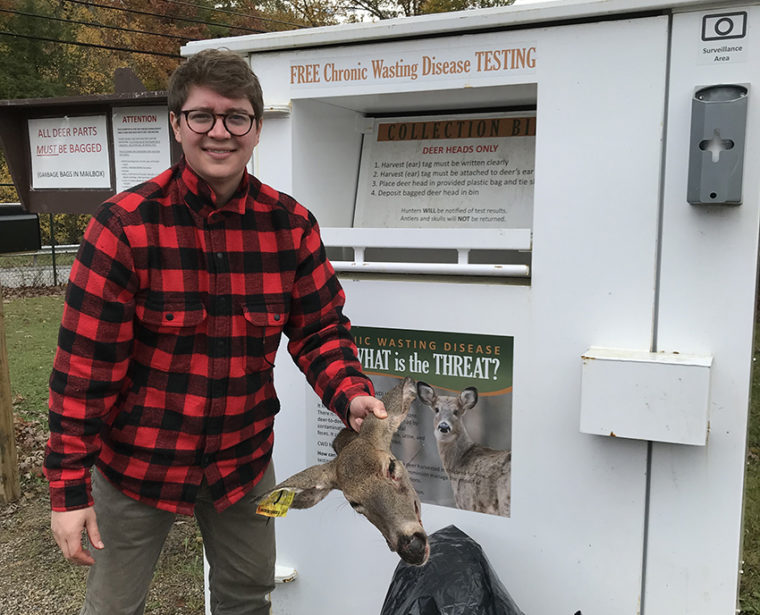 In CWD zones, it is extremely important for hunters to help their state meet doe-harvest goals.

Do we need to shoot bucks? Absolutely, but in disease zones we should be shooting more adult does than bucks. Otherwise deer herds grow above what the habitat can support, the number of CWD-positive animals on the landscape climbs each year, and those doe groups become reservoirs for a disease that we cannot remove from the environment.

If you hunt in a CWD management zone, help your state achieve doe-harvest goals, and help promote the benefits of doe harvest. It’s important to increase harvest pressure on adult bucks, but let’s focus even more effort on adult does.

Now more than ever, let’s not forget about the does.

Chronic wasting disease (CWD) continues to spread across the U.S. and beyond. It is an always-fatal disease found in most deer species, including elk, reindeer, moose, mule, red and white-tailed deer, and CWD has now been identified in over 300 counties in 26 states, four Canadian provinces (including the Toronto zoo), Finland, Norway and South Korea. Contagions spread through urine, feces, saliva, blood, deer parts, and especially via live deer. Importantly, there is no vaccine or cure. The severity of the disease necessitates increased resources for research, surveillance and monitoring. Learn more about what QDMA is doing to help fight CWD.