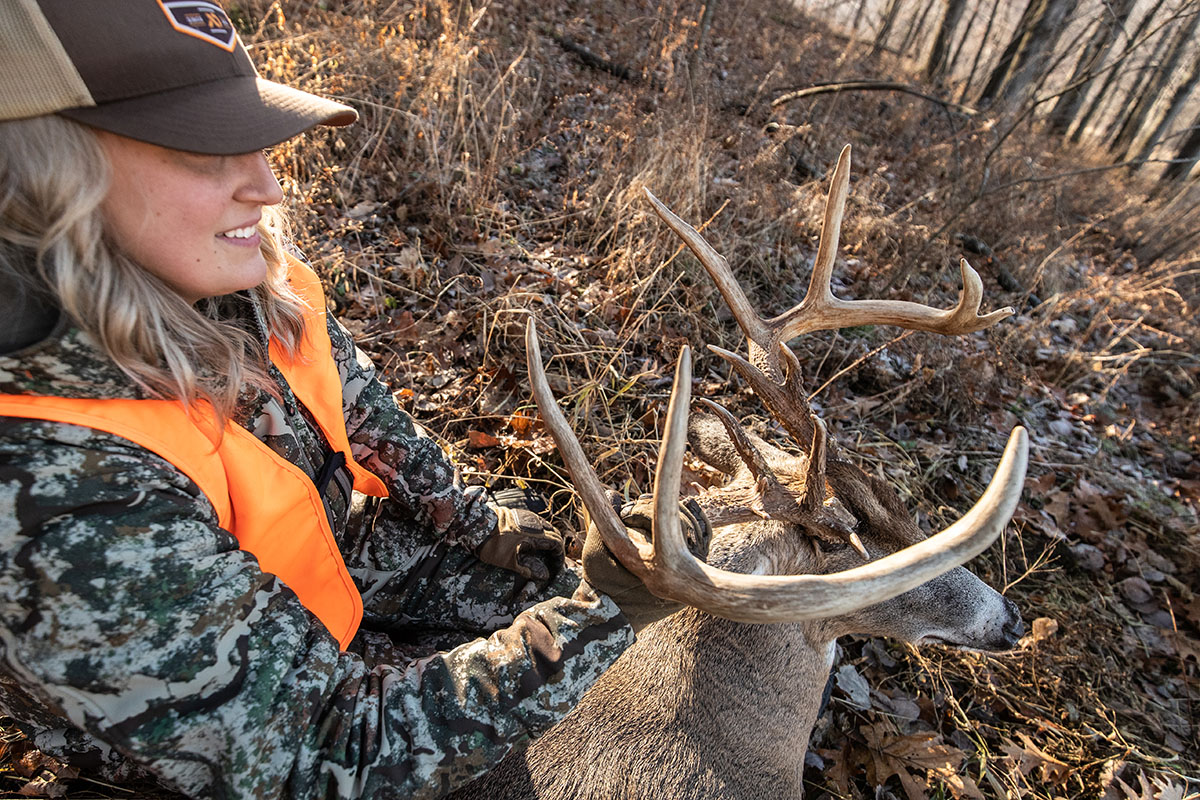 When hunting large tracts of land — whether it be public land like a National Forest or a large private tract that you lease — it’s important to be able to pinpoint locations that hold your best odds for deer hunting success before you ever step foot on the property to scout. This will help you maximize your limited scouting time and learn the property much more quickly.

One of the primary ways to do this is through map-scouting with tools like onX Hunt. The great thing about onX is you have access to lots of layers that provide a variety of information about the habitat and terrain. And while learning the habitat is an important part of the process of breaking down a new hunting property, today we’re going to focus on terrain. Specifically, we are going to take a look at four topographical features worthy of your attention.

Let me be clear, I’m not saying an area has to have one of these four terrain features to be a great hunting location. What I’m saying is that these features often concentrate deer movement and are worth checking out anytime you find them in your hunting area. Whether they ultimately produce will be influenced by other factors such as habitat, deer density, and hunting pressure. 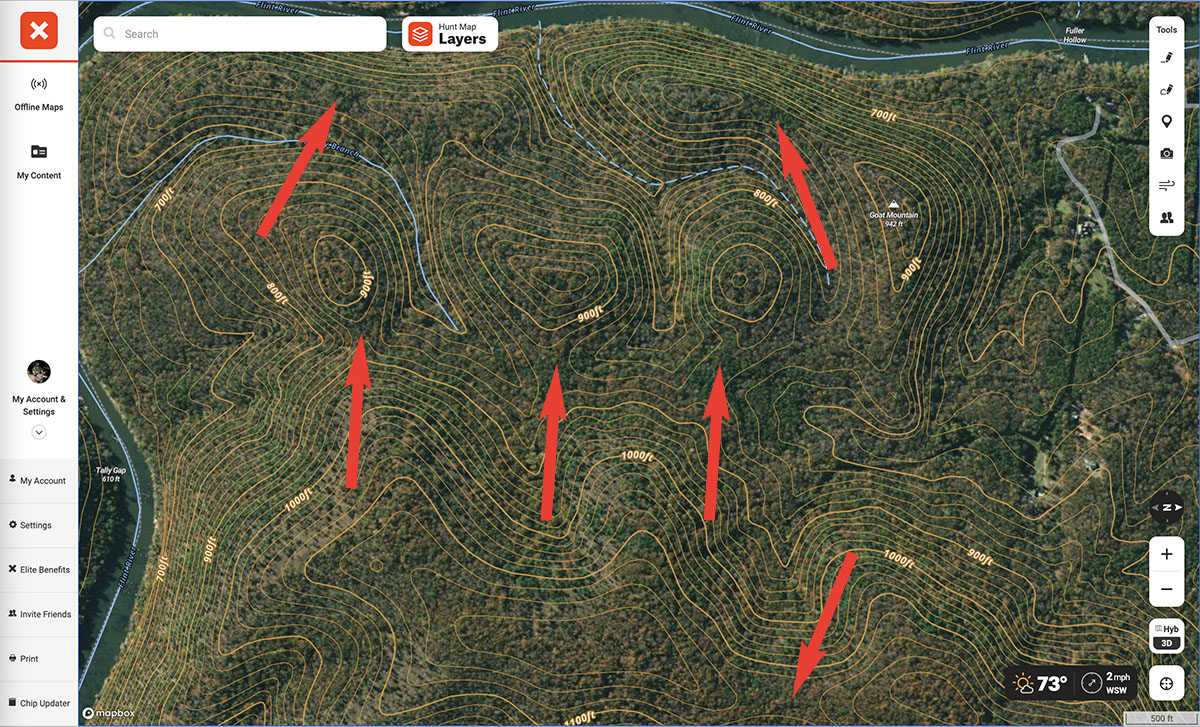 I know it’s old news. For years, hunting articles have pointed to terrain saddles as a great place to intercept deer seeking the path of least resistance. And while it may be old advice, that doesn’t make it any less effective. But not all saddles are equal. The trick is finding those harder-to-reach saddles that aren’t being scouted and hunted by every deer hunter in the area. I would also put more stock in saddles within close proximity to good cover. Mature bucks rarely expose themselves in open timber during daylight hours.

For those who may be new to terrain features, a saddle is simply a low spot on a ridge or a low spot between two ridges, where deer would be most likely to cross. You can see multiple examples of how those appear on a map in the image above. Think of it from the human perspective. If you had to cross a long, steep ridge, where would you choose to do so? Probably in the lowest spot on the ridge. Deer aren’t that different in their travels. The more energy they expend, the more food they need to consume to “refuel”, so it makes sense to use as little energy as needed to survive. 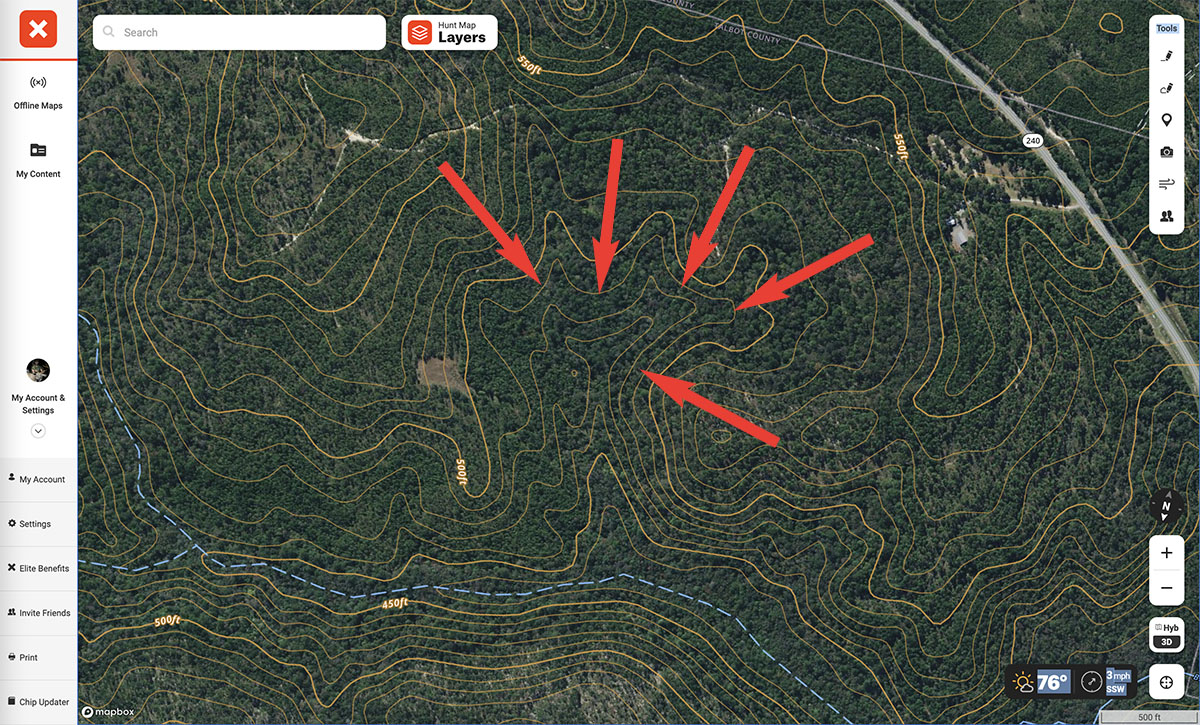 I think it was probably The Hunting Public who first introduced me to a “Crow’s Foot” or travel hub, but this one makes a lot of sense. Successful public land hunter Andy May discusses how he finds success in these types of areas in episode 1 of the Deer Season 365 Podcast. Once I learned about these travel hubs, I realized that I’ve actually killed a few deer in these terrain features long before I knew there was a catchy name for them.

As you can see in the image above, a travel hub is an area where multiple finger ridges all dump into a single drainage. The appearance can resemble a bird’s foot, hence the name “crow’s foot.” Since deer often travel along the sides of these ridges, an area with multiple finger ridges dumping into one drainage creates an intersection, so to speak, where these natural travel paths converge.

While these travel hubs can be a great location any time of year, they can be particularly effective during the rut when bucks are actively cruising throughout the day in search of receptive does.

One issue with actually hunting these travel hubs can be the unpredictability of how the wind will behave in these areas. Not only will you have the impact of terrain on the prevailing winds, but you also have thermals at play throughout the day. For more on thermals, check out this article on our website. 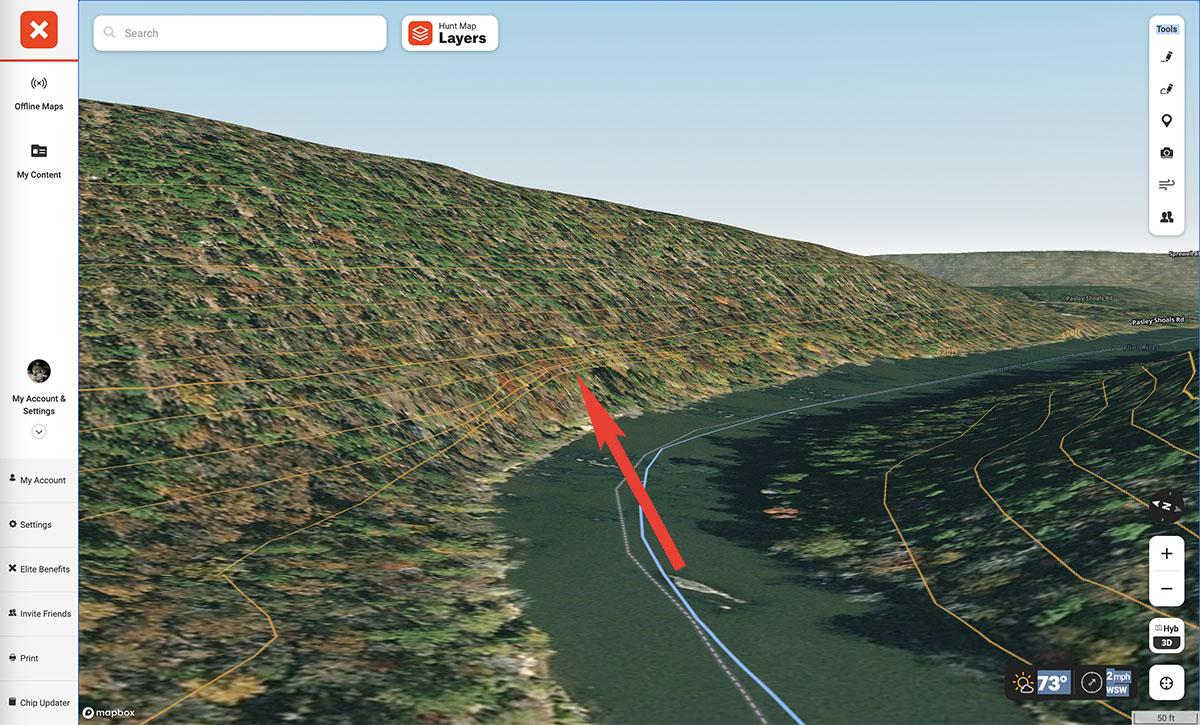 Dramatic topographic features like cliffs or bluffs can heavily influence deer movement, making it possible for a savvy deer hunter to ambush a deer in the resulting funnel or pinch point.

A cliff or bluff can be a great pinch point in two very different ways. It may funnel deer movement parallel to the cliff/bluff along the top or the bottom, depending on the steepness and the layout. Or, if there is a gap in a long, otherwise uniform bluff, it can funnel deer movement through the bluff. The latter is often referred to as a bluff gap, and may be difficult to pinpoint on a topo map unless the contour lines are very close together. 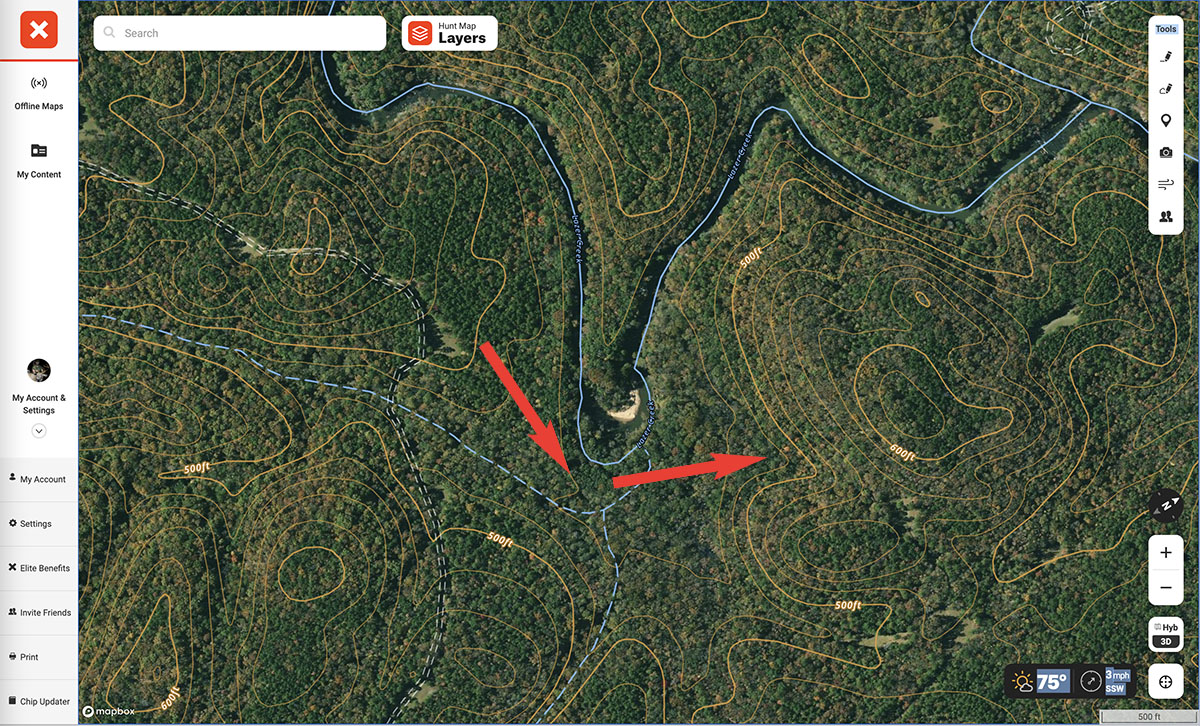 Bends in a creek or river can also funnel deer movement. When there is a sharp outward bend in a stream, it can cause deer to funnel around the point of the bend to avoid having to cross the creek multiple times to get to their desired destination. An example of this can be seen in the image above.

I’ve also heard hunters, like The Hunting Public guys, talk about deer using the areas on the inside of those sharp bends as favored bedding locations. While I have not scouted and witnessed that myself, it certainly makes sense why deer might feel safe in such a location. With the creek/river on three sides, a predator isn’t as likely to approach from those directions, which means they only need to monitor that fourth side with their noses to be relatively secure.

Here’s a great video from The Hunting Public discussing how to scout river bottoms and how deer tend to use bends in creeks and rivers.

These are the four most common topographic features I look for when using onX Hunt to map-scout a new property. While none of these features guarantees a great stand location, they are worth checking out when you hit the woods for some boots-on-the-ground scouting. You can then assess the surrounding habitat and current deer sign to determine if it’s worthy of hanging a trail-camera or a deer stand.

NOTE: If you’d like to try onX this deer season, you can get 20% off an annual subscription by using the promo code NDA at onxmaps.com. Not only will you save money, but onX will make a small donation to the NDA for every purchase using that promo code!