4 Ways to Light a Prescribed Fire 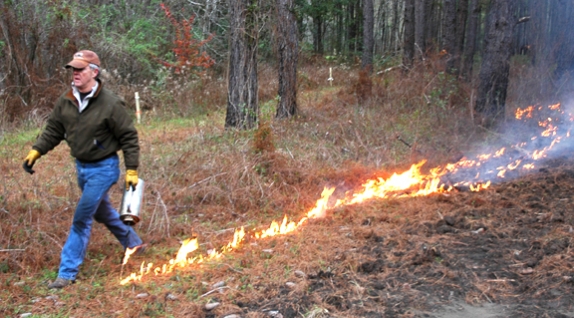 Prescribed fire is an excellent and cost-effective technique for setting back existing vegetation and stimulating fresh growth from the seedbank and from sprouting, which increases the quality and quantity of deer forage and cover. To help ensure a safe and effective burn, read my article on preparing to use prescribed fire, then you’ll be ready to apply the four firing techniques listed here.

There are four main firing techniques commonly used when the goal is a low-intensity prescribed fire for habitat improvement. The recommended firing technique varies with landowner objectives, condition of fuels, topography, and weather. Different firing techniques allow you to adjust fire intensity to the desired level. I will provide a general description here to introduce you to firing techniques that may be used. For additional information, contact your state forestry agency and review more detailed publications on using prescribed fire. One such publication, the USDA’s A Guide For Prescribed Fire in Southern Forests, is available free online. 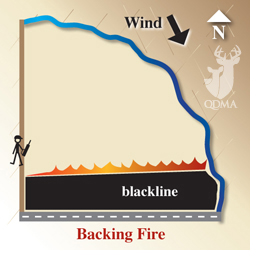 1. Backing Fire – A backing fire moves against the wind. Thus, it is relatively slow moving and generally consumes fuel more completely than fire moving with or parallel to the wind. Backing fires are set along a firebreak (or other barrier, such as a creek or road) on the downwind side of the area to be burned and allowed to back into the wind. A steady wind speed and direction is important for consistent and predictable burning. Backing fire is less intensive with lower flame heights than other firing techniques. This produces less scorch (if any) when burning oak woods. However, the slower moving fire can have a longer residence time and can possibly damage fine feeder roots of trees if the duff layer below the leaf litter is dry. This is another reason to burn when adequate duff moisture is present. Backing fire should be used when considerable fuels are present, especially vertical fuels (dense shrub layer), as they can elevate fire intensity if a heading fire is used (a fire that burns with the wind), which may damage/kill desirable overstory trees. Backing fire is typically the easiest to implement. Although it takes longer to implement a backing fire, it is the recommended firing technique when burning woods where damage to overstory trees is not desirable. 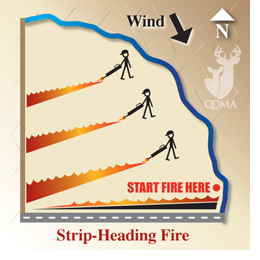 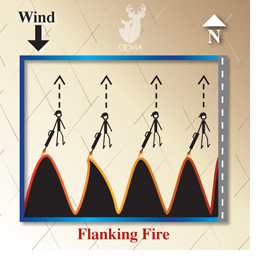 3. Flanking Fire – Flanking fires are set directly into the wind, allowing the fire to burn at right angles to the wind. Obviously, this can be dangerous if wind direction is inconsistent. Typically, several people are necessary to implement a flanking fire. Coordination is critical so that all the lines of fire are set at the same time and all the burners know where each other are and move at the same speed. Flanking fire is also used to secure the flanks of backing and strip-heading fires along firebreaks. Flanking fire is usually intermediate in intensity between backing and strip-heading fires. Implementation is more difficult, however, as coordination is critical among burners. 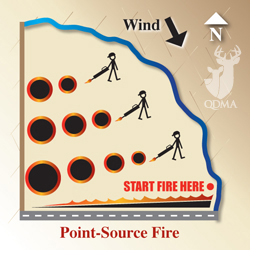 Remember, until you have experience with prescribed fire, contact your state forestry agency for guidance and direct assistance with conducting the burn. This will ensure a safe, effective burn that accomplishes your habitat goals.

Dr. Craig Harper is a Professor of Wildlife Management and the Extension Wildlife Specialist at the University of Tennessee. Craig is a regular contributor to Quality Whitetails and a Life Member of the QDMA. Dr. Harper and his graduate students concentrate their work on applied management issues, including forest management, early succession management, food plot applications, and the effects of quality deer management.
View all Articles By Craig Harper