5 Tips to Getting and Keeping Youth Interested in Deer Hunting 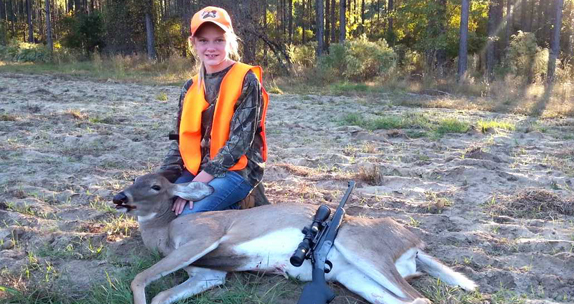 Next fall will mark 30 years of deer hunting for me. You can’t spend that much time in the woods without accumulating a lot of special memories. I still vividly remember the details of my first successful deer hunt, my first turkey, and my first good buck with a bow. But none of those accomplishments mean near as much to me as watching my 8-year-old son squeeze the trigger on his very first deer or my 9-year-old daughter harvesting her first buck.

This past season, I never even got to draw my bow back on a good buck, but my now 15-year-old son was able to harvest one his first time hunting “away” from me. Hearing his shot and getting the text that he had just killed a buck was more exciting than if I had pulled the trigger myself.

Like most fathers who love to hunt, my hope has always been to share my passion for deer hunting and enjoying the great outdoors with my children. That dream became clearly evident to my wife when I brought our son home from the hospital in little Mossy Oak bib overalls. I know too many hunters, however, whose kids have grown up with little or no interest in following in their parents’ footsteps when it comes to pursuing shooting sports, and I have often wondered what separates those kids who develop the passion from those who don’t. While there’s no guaranteed formula for getting and keeping our kids involved in hunting, there are certainly things we can do as a parent or mentor to increase the odds of them developing that lifelong passion. Let’s take a look at five of those things.

GET THEM INVOLVED AT AN EARLY AGE

From my experience, and the experience of others whom I have talked with, kids generally take a very early interest in their parents’ passion for the outdoors. For me, that was when they were around 2 years old. It started with questions about where I was going and what Daddy was doing. Then, when I actually brought home some type of critter, they were out there watching me cut it up, looking it over closely, and, of course, poking and prodding on it in amazement. All of this youthful curiosity builds over time until the question is finally asked, “When can I go hunting with you?”

Initially, this was a very tough question for me, because I have a tendency to take hunting very seriously – often too seriously. I wanted to get them involved, but the selfish side of me knew that taking them would require me to change the way I hunt, to get past the usual expectations and just plan on having a good time together. I soon realized that hunting with a young child means making the trips short, being ready to answer lots of questions, lowering my hopes of actually harvesting anything, and most of all, keeping it fun for the child.

Regardless of the child’s age, these early days afield with you are probably the most critical in determining whether or not he/she maintains an interest in hunting. These first hunts, like any first impression, are where the child is going to form their opinion about hunting. They are either going to decide that hunting is fun and enjoyable or that it is boring. So, it is your job to make sure it’s fun!

Probably the first step to ensuring that a child’s first hunt is not their last is to keep the initial outings brief. As a parent, you’ve probably already witnessed just how short an attention span most kids have these days, and the last thing they want to do is go sit in a blind or a treestand for hours on end, not being able to move around or talk. In most cases, you’ll have a pretty good idea when it’s time to head back, as most kids won’t hesitate to let you know when they start to get bored. I would get questions like, “How long are we going to stay out here?” or “Are we going to sit in this spot the whole time?” When my son was trying to be a little more subtle about things, he would simply ask what time it was.

Regardless of how they let you know, as soon as you detect boredom, either head to the house, or change things up a bit to keep them entertained.

I can still recall the events following my son harvesting his first deer. After the initial excitement of the harvest, I could see that he was a little upset. The remorse over taking the life of a living creature had set in, and he was questioning what he had done. It was a sobering moment for the both of us. I told him that day, and have told him numerous times since, that my love for him is unconditional, and regardless of whether or not he hunts, that’s not going to change. Fortunately, he made his own decision to continue hunting and has since taken numerous deer and his first turkey. I have had the joy of watching his interest and passion grow considerably over the last several years.

Had I chosen to push him early on and make him go with me when he didn’t want to, or had I belittled him for feeling remorse over his first deer, things could have turned out quite different. I’ve watched numerous kids lose interest in hunting (and lots of other sports for that matter) because a parent pushed them so hard to keep them involved. We, as sportsmen, all want our kids to share our love for hunting and the outdoors. However, we can’t force them to share that love, and any attempt to do so is only going to risk driving them further away. If they don’t show as much interest as you would like, then give them their space. Always keep the invitation open, but never force them to be an unwilling participant.

PROVIDE THEM WITH THE RIGHT GEAR

Going hand-in-hand with keeping hunting fun for the kids is keeping it comfortable, and that means providing your kid(s) with the proper clothing and equipment. Even for a diehard hunter, there is nothing worse than sitting in a deer stand freezing your butt off while trying to stay out there as long as possible. If it is miserable for us, imagine how much more miserable it is for a kid who is accustomed to a steady 72 degrees indoors. I still remember how completely unprepared I was when my son first started going afield with me. We layered him up in a bunch of mismatched clothes, baseball socks that pulled up over his knees (all his other socks were footies!), one of my oversized hats and a pair of big snow boots. He reminded me of the kid from the movie “A Christmas Story” who was so bundled up that he fell down and couldn’t get back on his feet. I quickly realized that if I was going to continue taking my son with me, I was going to have to get him some clothes that not only fit him properly but that would also make him look the part of a hunter. Let’s face it – kids want to be like Dad or Mom (at least until they hit the teenage years).

Just as important as the clothes they wear is the gun or bow they carry. Proper fitting is crucial to both the safety and enjoyment of your child. For a gun, that means making sure your child can properly shoulder and aim the firearm and the recoil isn’t more than they can handle. For a bow, it means finding one with the proper draw length for a good anchor point and the right draw weight so the child doesn’t have to strain to pull the bow back. If a kid doesn’t feel comfortable shooting the gun or bow, then chances are, they won’t be able to shoot it accurately or consistently. This will quickly lead to frustration and disappointment. If you are truly serious about getting your child involved, make sure you equip them properly, just as you would yourself.

HELP THEM BE SUCCESSFUL EARLY ON

Finally, for a kid to remain interested in hunting, sooner or later they are going to have to taste some success. While you and I may be able to sit in a treestand for hours on end, day after day, and never draw our bow back or click the rifle off of safety, a youngster is going to quickly deem that as boring! This may mean starting them out on something like squirrels or doves where there is no shortage of shooting opportunities. Or, in my son’s case, taking him deer hunting in areas where I knew there were plenty of does to thin out. Sure, I would love to see him shoot a nice buck, but first I wanted him to experience the excitement of having an animal come in and present a shot opportunity. Once he experienced that first taste of success with both deer and turkey, he was hooked. He no longer minds spending a little time waiting because he knows that sooner or later an opportunity will present itself, and he knows the rush he gets when it does.

There is nothing more rewarding than watching your child harvest his/her first game animal. To see the excitement in their eyes and to feel the pride of knowing you played a big part in their success is a feeling like no other. Most of all, it is the bond that develops between you and your child that makes it so special. It is a closeness that could only come from time shared afield. A bond that, if properly nurtured, will last a lifetime.

Take some time to get your child (or nephew, niece, or neighbor) out in the field. I can guarantee you will be glad you did!