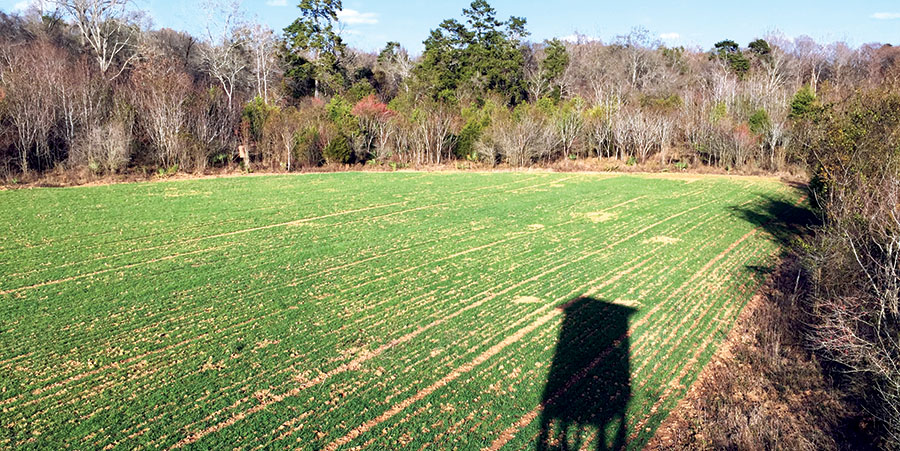 This fall, tens of thousands of acres of clover food plots will feed deer and numerous other wildlife species. In addition, alfalfa, chicory, oats, and a suite of other species and mixes will be actively growing and feeding wildlife. Depending on your location, much of this acreage will have already provided food for one to three months and will continue providing it for another four to six months. The sheer tonnage provided and time of availability make food plots a valuable habitat enhancement strategy.

Food plots are not without their critics, however. Some people equate food plots to baiting and claim that if baiting is not allowed then food plots should be illegal too. This is flawed logic, which explains why not a single state outlaws the planting of wildlife food plots. Regardless, food plots and baiting discussions regularly occur at deer camps and around firepots throughout the whitetail’s range. To arm you with information on why food plots are far different from bait sites, here are six key differences.

As I described in my opening paragraph, food plots provide food for deer 24/7 until the forage fades away with a change of seasons or is completely consumed. In very small plots it may be consumed after a few weeks, while in larger plots it can last for several months. I realize bait sites are routinely recharged, but they don’t commonly provide forage for deer 24/7 for even a week, let alone a month. This time of availability is important as deer have well-defined pecking orders, and subordinate animals may be denied access to food when its availability is limited. Food plots provide equal-opportunity access to all deer in the neighborhood.

Due to their size and amount of food produced, food plots spread deer out over a much larger area than bait sites, and thus they mimic natural forage in woods and fields. This reduces stress on animals, minimizes aggressive behavior, reduces direct contact with individuals thus reducing possible transmission of diseases and parasites, provides more access to forage by subordinate animals, and allows more individuals to feed at the same time. In contrast, bait sites tend to congregate animals in a very small area which exacerbates stress, aggression, exclusion, disease transmission, and habitat degradation.

Some people equate food plots to baiting and claim that if baiting is not allowed then food plots should be illegal too. This is flawed logic, which explains why not a single state outlaws the planting of wildlife food plots.

In food plots, deer tend to forage above the ground rather than right on it. This is a big deal from a health and disease standpoint. Many disease and parasite carriers live at ground level, and deer feeding off the ground, like at bait sites, are more susceptible to them. Conversely, when deer forage off plants well above the ground, they are far less likely to be afflicted with ailments.

Similarities exist in the livestock industry. Progressive farmers and ranchers who rotationally graze cattle can keep them feeding on only the upper portions of plants. The upper portions tend to be higher quality than the lower, but this also keeps their animals foraging well above the ground and away from most parasites and pathogens.

In the food plot/bait site discussion, deer eat at ground level from bait sites and well above this in food plots, at least until the plots are eaten to the ground. Don’t underestimate the significance of this point, especially since bait sites can congregate large numbers of deer into a confined area. Anyone who has visited a well-used bait site knows the area is often littered with deer urine and feces. So, deer are eating from the ground, and food is often placed directly on top of urine and feces. I have a strong stomach, but you’re not going to catch me eating supper off the floor of our camp’s outhouse.

Come one, come all

In addition to forage for deer, food plots provide high-quality nutrition for numerous other wildlife species. They’re typically planted with deer in mind, but food plots also feed bear, elk and other big game species. They feed squirrels, rabbits and other small game species. They feed turkeys, doves and other upland birds. Plus, they feed a variety of nongame species, songbirds and insects. A flowering buckwheat stand full of honey bees is a sure sign your planting efforts were completely worthwhile. I’ll acknowledge bait sites also feed more than deer, but many of the other species such as feral hogs, raccoons and crows are often regarded as nuisances.

A place to hide

Finally, when food plotters use good agronomic practices, their efforts actually enhance soil health. No-till planting helps increase soil organic matter and cycling of nutrients, reduces erosion, and improves soil biological fertility. This leaves that specific plot of land better than the food plotter found it. As a deer hunter and steward of our natural resources, we should always strive to leave our natural resources a little better than we found them. In contrast, I’ve never seen a plot of land that appeared healthier after it was used as a bait site.

The purpose of this article is not to chastise hunters who use bait nor to suggest that all bait sites are detrimental to deer management. In the past, in areas where it’s legal to do so, I’ve hunted over bait sites, and it’s likely I will again at some point in the future. Rather, the purpose of this article is to highlight the beneficial value of food plots and clearly demonstrate that food plots and bait sites are not equal in the deer world.