Many avid hunters want to support a healthy deer population, and some try to do this by providing supplemental feed. There are potential positive impacts from a properly conducted supplemental feeding program, but there are also risks, even under the best of conditions. One risk is toxins produced by fungi.

Aflatoxins are toxic chemicals produced by some species of fungus in the Aspergillus genus. They were first identified in 1961 after more than 100,000 turkeys and other domestic animals died from ingesting aflatoxin-contaminated feed. Since that time, regulations have been in place to protect humans and animals within the human food supply. However, wildlife feed often does not have the same level of protection. In some cases, corn with aflatoxin levels above legal limits for livestock has been sold for wildlife use. 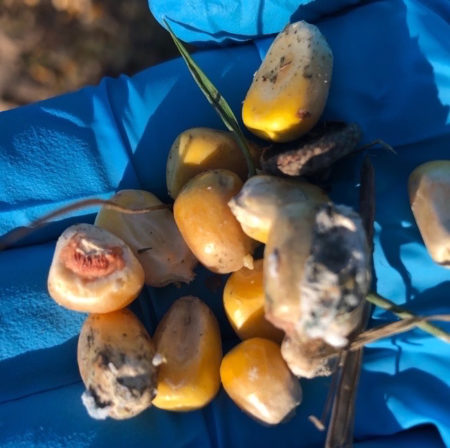 Aflatoxin is a toxic chemical produced by naturally occurring fungi that form on corn and produce mold.

This website is all about deer, but it’s important to note that some turkey biologists are concerned that ingestion of aflatoxin-contaminated corn may be contributing to regional declines in turkey populations. Turkeys and other birds are at higher risk from aflatoxin exposure than mammals like deer. Turkeys fed levels of aflatoxins as little as 100 to 200 parts per billion (ppb) showed liver damage and decreased immune function within two weeks. Northern bobwhites are also negatively affected at similar concentrations. Importantly, bobwhites and white-winged doves have been shown to eat aflatoxin-contaminated feed as readily as uncontaminated feed.

Mammals are less susceptible to aflatoxins than birds, but slightly greater levels of aflatoxins will hurt their health too. Deer fawns fed diets of 800 ppb aflatoxins did not appear sick but had decreased body weights and organ damage.

Aflatoxins can also be harmful to wildlife other than game species. Many species visit deer feeders. In fact, deer accounted for only 25% of the animals visiting feeders during a recent Mississippi State University (MSU) Deer Lab Study. Northern cardinals are one of the many songbirds that visited, and they have decreased immune function from aflatoxin levels as low as 25 ppb, and levels above 500 ppb caused 77% mortality.

This website is all about deer, but it‚Äôs important to note that some turkey biologists are concerned that ingestion of aflatoxin-contaminated corn may be contributing to regional declines in turkey populations.

We travelled from Alabama to Texas to sample bagged and bulk feed sold for wildlife use. We got samples at county co-ops, feed and seed stores, national chains, gas stations, bulk corn vending machines, and more. Of the 64 samples from six states, seven (11%) contained aflatoxins but only up to 23 ppb.

The MSU Deer Lab found aflatoxins in only 11% of samples of bagged and bulk feed sold for wildlife, and at relatively low levels. However, the fungi that cause aflatoxin are found in nature, so corn left on the ground may eventually develop aflatoxin, especially in summer and in wet weather.

The fungi that produce aflatoxins are naturally found throughout the United States, so even if feed is not contaminated going into feeders, aflatoxins may be produced after the feed is placed on the land. To study this risk, we sampled deer feeders throughout Mississippi during the summer and hunting seasons of 2019 and 2020. We found aflatoxin in 4% of feeders during summer with levels up to 139 ppb. During the hunting season, aflatoxins were present in 6% of feeders with levels up to 61 ppb.

So, although the percentage of feeders with aflatoxins was less than for bagged and bulk feed, average levels were greater. One noteworthy result is that we even found aflatoxin in protein feed, which often contains ground corn.

One of our most interesting results was documenting that aflatoxins are produced over time on corn remaining on the ground. We placed corn in Mississippi forests and collected samples over 10 days during July and November, allowing us to compare summer and hunting season feeding. There was not much aflatoxin production during November, probably due to cooler temperatures. Only one of the 50 samples tested positive and it had 35 ppb on the first day of exposure.

July was a very different story. Aflatoxins were detected by the fifth day on the ground and at values that greatly exceeded those that will harm turkeys, quail, and other birds (chart below). Levels and prevalence continued to increase until all corn piles had aflatoxins after the eighth day and aflatoxin levels exceeded 1,000 ppb!

The warmer, more humid conditions of summer create the perfect environment for Aspergillus growth and aflatoxin production. This growth takes place right when young turkey and quail may begin eating corn left on the ground. Fawns will follow their mothers by late summer and may also eat remnant corn tainted by aflatoxins.

If feeding is an important part of your deer management program, there are some things you can do to limit the risk of aflatoxin contamination. These fungi exist in the environment, so you can never completely remove the risk, but some easy practices can help reduce the chance of aflatoxins in your feeder.

Your first step is to limit the chance that the feed you are providing contains aflatoxins. Some brands of wildlife feed state on the bag that it is tested for aflatoxins and contains less than a set threshold. Testing requirements are not consistent across states, so not all companies will spend the money to test their corn or feed components. You can increase the chances that your feed is safe by only purchasing tested feed.

An important second step is to minimize the risk from environmental exposure. Even the safest feed can grow mold over time just like food in your kitchen. When putting out feed, especially feed that may be affected by wind and rain, limit the amount you provide to what can be consumed within three days. Limiting the amount of time feed is exposed to the environment before wildlife consumes it reduces the risk that aflatoxins will be produced on that feed. 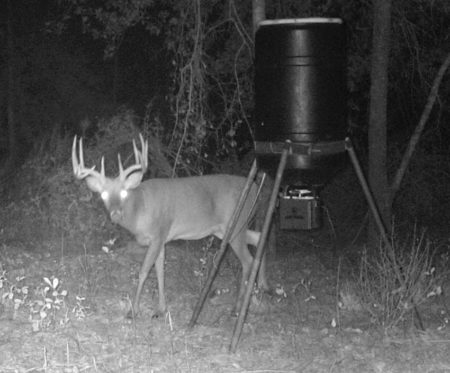 In warm, humid conditions, aflatoxin forms quickly in corn on the ground. Limit the amounts distributed on the ground to what will be consumed in less than three days.

Lastly, cleaning your feeder regularly with a solution of regular household bleach (1 part bleach to 6 parts water) may help kill any Aspergillus fungus living in it. When cleaning feeders, first remove as much debris as possible with soap and water, then clean with bleach, and lastly, be sure to let feeders dry before refilling them. If the fungus is not present, then aflatoxins cannot be produced.

Aflatoxins can contaminate supplemental feed at any time. It may be before the corn is harvested, while it is stored in a warehouse, or on the forest floor waiting for a deer to eat it. However, MSU Deer Lab research has shown that the deer hunting community can take some easy steps to help protect all wildlife from aflatoxins. Doing so will help keep deer, turkeys, songbirds, and all the other wildlife eating supplemental feed healthy for future hunts and the next generation.

About the Authors: Miranda Huang is a graduate student in the Deer Ecology and Management Lab at Mississippi State University (MSU Deer Lab). Other contributors to this study included Dr. Steve Demarais, a wildlife biologist and professor, and Dr. Bronson Strickland, an extension wildlife specialist and researcher, both also at MSU Deer Lab. Dr. Cooper Brookshire is a veterinarian and professor at the College of Veterinary Medicine at Mississippi State University. William McKinley is the Deer Program Coordinator for MDWFP.

View all Articles By Miranda Huang