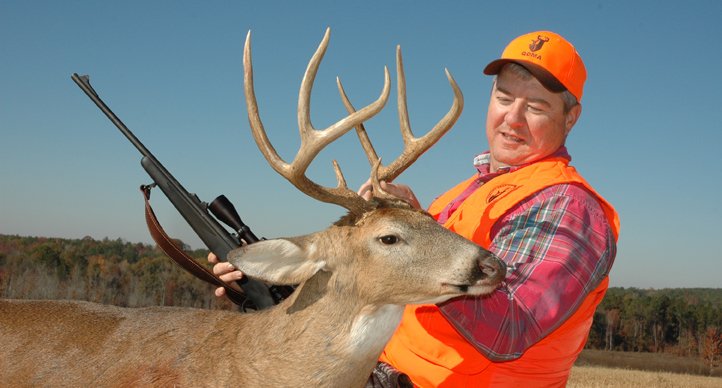 For you older hunters, Webster’s defines average as, “A typical or usual level, degree or kind.” For you younger hunters, Wikipedia defines average as, “A measure of the middle or typical value of a data set.” So, as you read this, would you consider yourself an average hunter? Many would be offended if considered average, especially with respect to our prowess at chasing and tagging whitetails. Myself included as I dedicate a tremendous amount of time during the year to learning more about this amazing creature in order to put myself in better viewing and shooting positions.

My use of “average” in this case though pertains more to hunting expenditures than success in the field. Every five years the U.S. Fish and Wildlife Service conducts a national survey of fishing, hunting and wildlife-associated recreation. The most current survey was in 2011, and the results are just now available. The following information is from that survey.

In 2011, the average hunter spent $2,484 on all things hunting related. Nearly $2,500 is a substantial sum, and one that may make even the most understanding significant other roll their eyes. Let’s break that down into the top 10 items we spent money on and you can determine for yourself how “average” you are.

10) Private Land Use Fees:The average hunter spent $55 on this item in 2011 for a total of $755 million. However, only 9 percent of hunters actually spent money on this category, and those few spent an average of $633 each. These were not lease fees as that is a separate category.

9) Bows, Arrows and Archery Equipment:
The average hunter spent $68 on this item for a total of nearly $935 million. Twenty-five percent of hunters spent in this category and I was way “above average” here. Expanded archery seasons and crossbow use both contributed to this category’s seat in the top 10. In fact, over 50 percent of the total deer harvest in New Jersey in 2011 was by archers.

8) Hunting Dogs and Associated Costs:The average hunter spent $70 for a total of over $951 million. Only 7 percent of hunters spent here, and the average per spender was $945. Hunting dogs aren’t cheap, but good ones are certainly worth the expense.

7) Licenses, Stamps, Tags and Permits:
The average hunter spent $72 for a total of over $986 million. How much does the average anti-hunter spend for wildlife conservation? Far less than the average hunter, and be sure to remind them of that at every opportunity. Seventy-five percent of all hunters contributed to this category. The remaining hunters are exempt due to age, landowner status, etc. In Pennsylvania I purchase a hunting license, archery stamp, muzzleloader stamp, bear license, furtaker license, bobcat permit, migratory bird stamp, duck stamp, antlerless deer license, and two to four DMAP permits for a total of $140 to $160. It looks a little pricey on paper, but the opportunities it provides are worth at least 10 times the cost. Also, I process my own deer and get approximately 25 meals (for my family of four) from each animal. The same amount of meat for 25 meals from the grocery store costs more than my total Pennsylvania license purchase. So, the venison from one deer covers my licenses and I still have two to four deer tags, a bear tag, etc. left. I’m not suggesting venison is inexpensive when you combine all hunting-related purchases, I’m simply showing the value I get from my hunting license.

6) Ammunition:The average hunter spent $95 for a total of nearly $1.3 billion. Amazingly, only 65 percent of hunters spent money on ammunition in 2011. I guess the rest were stocked up from 2010 or they have some really giving friends.

5) Firearms:
The average hunter spent $223 for a total of over $3 billion. Twenty-two percent of hunters spent in this category for an average of $1,015 each. This category included rifles, shotguns, muzzleloaders and handguns. Note: you can win a firearm at a QDMA Branch event for far less than $1,015 – support your local Branch!

4) Food (for hunting trips):The average hunter spent $235 for a total of over $3.2 billion. Equal to the license category, 75 percent of hunters spent in this category. Interestingly, food and lodging are often discussed together as hunting expenditures, but lodging expenses were only a fraction of food’s. The average hunter only spent $49 on lodging in 2011.

3) Special Equipment:
This is a big category as it included boats, campers, cabins, ATVs, pickups, and more. The average hunter spent $321 in this category for a total of nearly $4.4 billion. However, only 4 percent of hunters spent here for a spender average of $7,159!

2) Transportation:The average hunter spent $349 on transportation for a total of over $4.7 billion. Eighty percent of hunters spent in this category making it the most popularly purchased item. This total included both public and private transportation.

1) Land Leasing and Ownership:The average hunter spent $540 for a total of nearly $7.4 billion. This was by far the top category as it was 57 percent higher than the second item. The survey did not separate leasing and land purchasing, but another U.S. Fish and Wildlife Service survey showed just under 7 percent of hunters leased land in the U.S. in 2006. That same survey showed 1.3 million hunters owned over 134 million acres, and over a decade ago (2001) the number of hunters owning land exceeded the number leasing land. How do QDMA members fit in this? Many feel all QDMA members are large landowners. In reality, a full third of our members (33 percent) do not own any land, and over half of our members hunt (not own) on less than 500 acres.

Two other items of particular interest that just missed the top 10 are Plantings (No. 11) and Taxidermy/Processing Costs (tied Lodging at No. 12). I certainly contribute more than my share to these categories (and my taxidermy bills are at cost). Notably, the Plantings category was not even listed in the 2006 National Survey of Fishing, Hunting and Wildlife-Associated Recreation. It is amazing that in the past five years the average hunter went from spending less than $2 (the smallest category in the 2006 survey) to $51 on plantings for a total of over $702 million. No wonder there are so many food plot blends and products available today. This is an increase of over 2,400 percent!

Back to the original question, “Are you an average hunter?” I spent more than the average hunter on 6 categories (numbers 1,2,4,7,8 and 9) and less on 4 categories (numbers 3,5,6 and 10). However, simply by being a QDMA member and reading Quality Whitetails you’re clearly above average with regard to your knowledge about deer, their habitat, and the importance of ensuring our hunting heritage. That’s where it really counts, so here’s to above average.