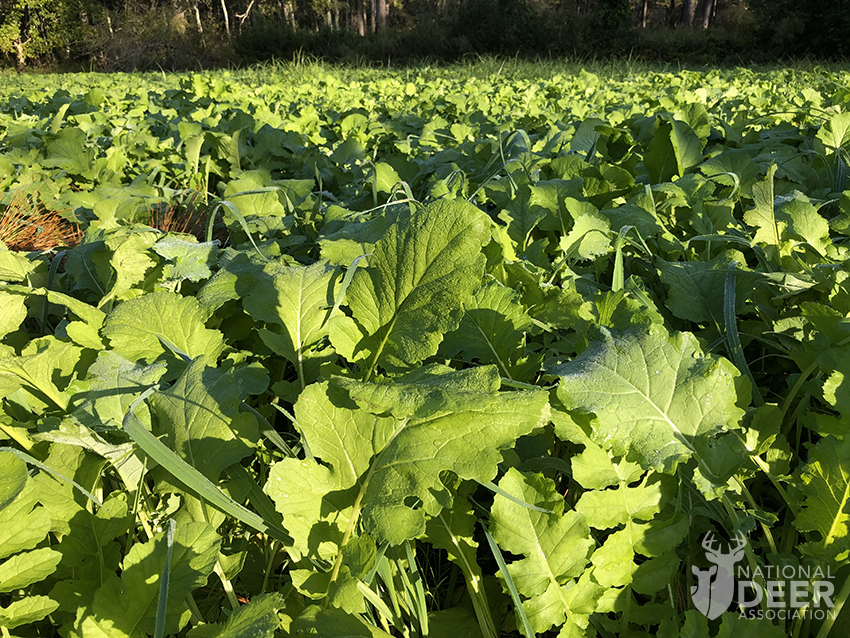 Approaching the food plot, I was shocked by what I saw: an entire field of yellowing turnip and radish leaves. I wondered if I had skimped on fertilizer. Or perhaps I had applied soil-active herbicide to the field the year before and forgotten before planting this fall. But neither of these were possible, as this was a new food plot that I had adequately fertilized.

The plot looked lush (like the one seen above) in September and October, and at least a dozen deer had been using the plot at that time. In fact, I had seen at least one buck 3½ or older each of the three evenings I had hunted it, including a 4½-year-old that slipped just out of bow range twice. I had specifically planted this plot to provide harvest opportunities in November and December, when the adjacent perennial plot would begin to decline in production. Unfortunately, those plans went out the window. My plot (below) had been decimated by the fungal disease anthracnose. 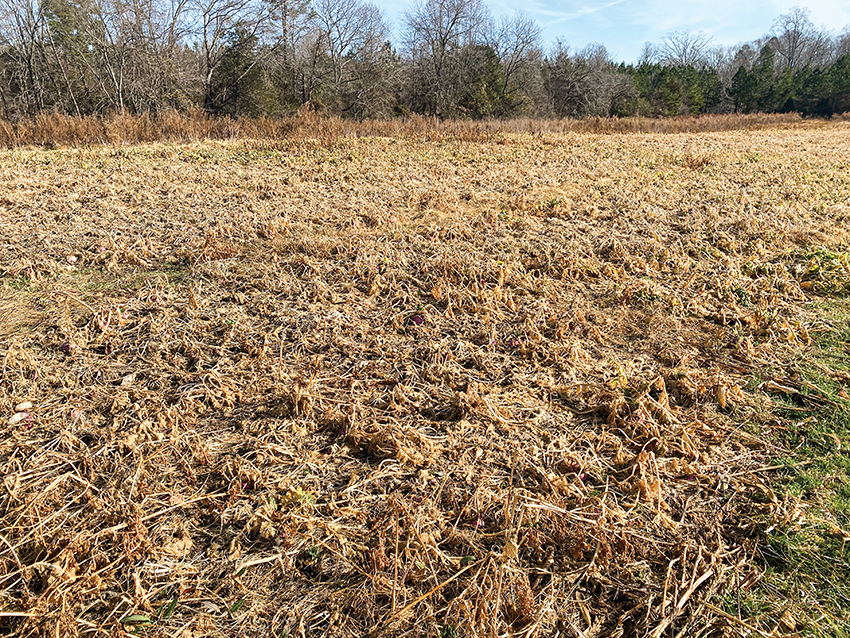 This field wasn’t sprayed with herbicide. It was infected with anthracnose. Several techniques can be used to avoid seeing your hard work and planning be devastated by a fungus.

The term “brassica” is used often by food plotters to describe a variety of forages, but common use may lead to confusion about what the word means. Brassicas are those plants in the genus Brassica, which includes plants such as kale, rape, turnips, Brussels sprouts, and broccoli. Radishes are not brassicas, as they are in the genus Raphanus. However, both brassicas and radishes are in the family Brassicaceae, which is commonly referred to as the crucifer family. Several problematic food plot weeds are also in the crucifer family and are often called cruciferous weeds. If you’re ever trying to conceal from your hunting buddies that you spotted a big buck in a leafy green food plot, tell them you saw him in a crucifer plot – you won’t have lied, and the location will still be your secret!

Brassica varieties are planted together commonly, and there is considerable disease overlap among these plantings. Several common diseases affect leafy green plantings, and most are either fungal or bacterial. Fungal diseases tend to be more common in most of the country, and I’ll focus on those here. Cercospora leaf spot, anthracnose, alternaria leaf spot, and downy mildew are several of the diseases that infect leafy greens, with cercospora and anthracnose being more common. Both cause yellow and brown spots on the leaves, which to the untrained eye might look similar to nutrient deficiencies. Cercospora tends to produce larger, tan spots, whereas anthracnose produces more, smaller spots as well as lesions on the stem.

Understanding the ecology of these diseases can help with their control. Both live on plant debris of either previous brassica crops or cruciferous weeds, which includes species such as wild mustard, wild radish, and shepherd’s purse. Fungal growth is enhanced during hot, wet conditions, and their spores can survive in the soil for several years.

Control of leafy green fungal diseases can take several forms. The most effective and efficient for food plot managers include cultural control techniques. Cultural control practices include correct planting techniques, site selection and crop rotation. Leafy greens planted early are more likely to have fungal issues, particularly in the South, because of relatively warm conditions. These forages should be planted early enough to grow prior to frost, but disease issues are more likely if they are planted too early. Problems with early plantings are especially likely during wet years or in fields with poor drainage.

Plant spacing, which relates to seeding rate, also is important to consider. Not only will dense plantings of leafy greens be less productive because of competition between seedlings, dense plantings also promote soil shading. Allowing sunlight to dry the soil partially as the seedlings are developing reduces the risk of promoting fungal diseases. This point is not to suggest that bare spots within the field are desired, but rather that allowing spacing for drying early in the growing season can reduce disease issues, which highlights how using the correct seeding rate is important. More seed is not always better!

Crop rotation is widely considered the most important strategy to reduce disease in leafy greens. Allowing at least two years between plantings allows for fungal spore levels to decrease substantially in the soil. Control of cruciferous weeds (including wild mustard, pennycress, and other weeds in the family Brassicaceae) is an overlooked aspect of rotation, and it should be a priority if you want to avoid fungal diseases. These diseases live on cruciferous weeds as readily as they do planted crops, and control of weeds in this family should not be ignored. Even if the field is planted to other forages or left fallow, these weeds can be controlled in most instances with selective herbicides. In my case, wild mustard growing in the previously unplanted field likely harbored the anthracnose that killed my leafy green planting.

The final common-sense approach to avoiding these issues is to plant a variety of crops within a field. Leafy greens tend to do best when planted alone, as mixtures including leafy greens and other plantings (such as clovers) tend to result in competition between forages. For example, leafy greens mixed with clovers often result in either shaded-out clover or sparse coverage of greens, depending on how much of each forage is in a seed mixture. Providing separate plantings of leafy greens and other cool-season annuals in the same field is often a better approach. Planting half of the field in a mixture including annual clovers provides nutrition longer into the spring than leafy green plantings, extending the window where a particular field is attractive to deer. Additionally, separate plantings can hedge your bets against fungal diseases. Although there are differences in production and attraction between leafy greens and other cool-season plantings, having half of the field growing is better than the entire field being dead if a fungal disease hits. Had I planted half of my plot in cereal grains and clovers, I would have still seen deer activity around the plot after the leafy greens were killed.

Fungicides can be used to control these diseases, but they may not be a reasonable option for many food plot managers. It is especially important to read and understand the label for fungicides, as many differ markedly from herbicides in application frequency. For example, Quadris® is a common fungicide for fungal disease control. According to the label, it is recommended to apply prior to disease development and to make subsequent applications every one to two weeks. Although fungicides may help reduce diseases when applied after lesions appear on the leaves, they cannot be relied on to “clean up” a field in one pass as we might expect with herbicides. Cost also is prohibitive: Quadris® costs approximately $15 to $20 per acre per application, with two to four applications necessary. Fungicides may be an option if a plot is particularly important or if cost is not an object, but appropriate planting methods and crop rotation are the techniques deer managers should concentrate on.

Leafy green fungal diseases may not be a common issue many managers deal with, but they can be devastating to food plots and hunting strategy if you are not prepared. With a sound planting strategy, you can likely avoid walking up to a dead, brown field of brassicas during the middle of the rut like I did last year.