Born With One Hoof in the Grave? Fawns Die Even Without Predators 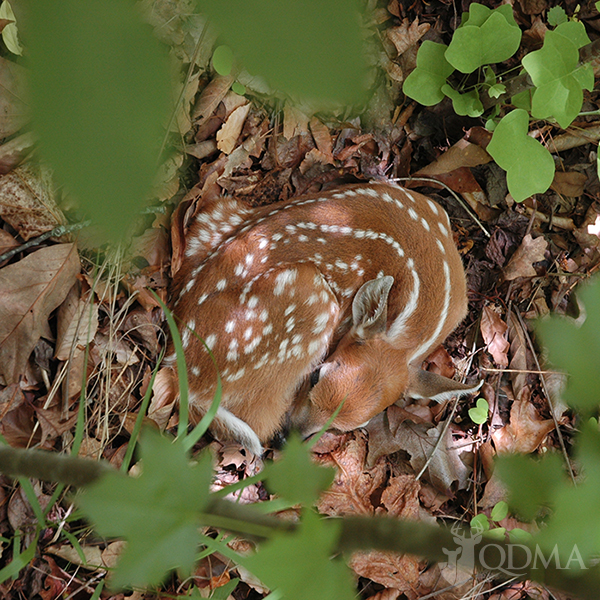 Predators are one of the most widely discussed topics of deer hunting in the past few years, particularly in regards to population management and fawn survival. If you were to ask any hunter what factor is most limiting to fawn recruitment where they hunt, chances are they will say coyotes. It’s no surprise why. Nearly 90 percent of survival studies over the past 30 years have documented predation as the leading source of mortality for fawns.

Most survival studies over the past 15 years have documented fawn survival between 33 and 68 percent, and many hunters have implemented predator-control efforts with the common-sense logic that because predators kill fawns, less predators will mean greater fawn survival. While this appears to have worked in some areas, in other areas deer managers have seen little to no return on investment from these strategies. For example, a South Carolina study by Dr. John Kilgo and his colleagues demonstrated that intensive coyote removals were ineffective at increasing fawn survival.

If predators are limiting fawn survival, then why is the mass removal of predators in some cases not reversing the trend? Predation may have less of an impact than we think. To explore how and to what degree predation may be impacting deer populations, we must look at a population that is not exposed to predators. We can find one such population of wild deer in Sussex County, Delaware.

Sussex is the southernmost county in Delaware and is a patchwork of row crop and fragmented forest. Like other agricultural landscapes, Sussex supports a fairly dense deer population of around 50 deer per square mile. Deer benefit from high-quality forage provided by row crop agriculture year-round in the absence of predators. Delaware has had no confirmed sightings of bobcats and only one report of a transient black bear in the last 150 years. Coyotes have yet to establish a population in the state but are occasionally sighted. To put the rarity of the sightings in context, only nine coyotes have been reported harvested statewide (Reporting coyote harvest is mandatory in Delaware.)

Our findings suggest that predators may simply be removing the “doomed surplus” – the individuals that would have died regardless of predator intervention.

We spent two springs, 2016 and 2017, capturing and collaring 109 newborn fawns throughout Sussex County. Each fawn was monitored daily to track its survival. When a fawn died, we investigated the scene and removed the carcass to submit to veterinarians for necropsy. We were also collecting location data for both the does and fawns to determine how movements and behaviors change as the fawning season progressed. 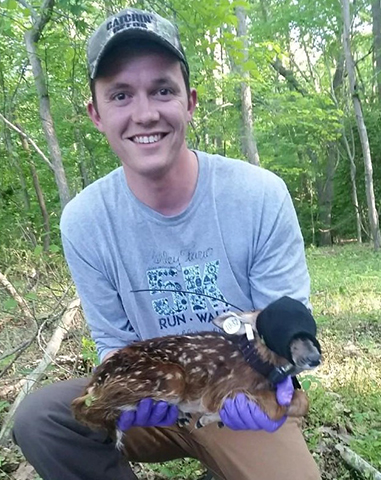 Justin Dion of the University of Delaware with one of 109 fawns captured for his study in Sussex County, Delaware. Since predators are virtually absent in that region of Delaware, Justin was able to study many of the other causes of fawn mortality that may be masked by predation where it occurs.

What we found was somewhat surprising: even in the absence of predators, many fawns were still dying. In fact, our survival estimate after 90 days was 45 percent. Another mid-Atlantic study from Pennsylvania State University conducted by Justin Vreeland and colleagues found similar survival rates, but nearly 50 percent of the mortalities observed in their study came from predators. The 45 percent survival rate that we observed was toward the lower end of the range of estimates from studies over the past 15 years, all of which listed predation as the leading cause of mortality.

More important was the discovery that all of our fawn deaths were linked to natural causes such as emaciation, disease, or birth defects. What this showed us was that natural sources of mortality can cause low fawn survival similar to estimates seen in areas with predators. With so much natural mortality occurring in the absence of predators, it leads us to question the importance of predation as a driver of deer numbers. Our findings suggest that predators may simply be removing the “doomed surplus” – the individuals that would have died regardless of predator intervention. For example, if a predator kills a fawn that is dying of pneumonia, the event is recorded as predation because we have no way of knowing the animal was sick before it was eaten. This scenario might explain why many studies have found predation to be the most important cause of mortality, as well as why some predator management efforts have been largely unsuccessful.

If predation is not the problem, then what can we do to stem the losses of our fawns? To look at this question, we compiled a set of factors that could be influencing fawn survival. We investigated how each factor changed the chance a fawn would die. What we found was that three factors noticeably influenced the probability of mortality for our fawns.

The greatest impact on survival was birth weight. Fawns lighter than 6.6 pounds had a greater risk of death than fawns that were 6.6 pounds or heavier.

Doe age was a third important factor. We divided our does into two categories: mature and immature. As most hunters know, bucks grow larger antlers as they age because they can allocate more resources to antler growth once muscular and skeletal development is complete. Similarly, does have reached their peak body size by 4 years of age, which means they are able to focus more nutritional resources on the growth of their fawns rather than their own body. We considered does older than 4 at the time they gave birth to be “mature.” These does are also experienced mothers and would therefore be better capable of caring for their offspring. What we found supported these ideas, with fawns of mature does experiencing lower rates of mortality when compared to immature does.

What You Can Do

What does all this information mean in terms of deer management where you hunt? First and foremost, predation is not impacting deer populations the same in all areas, and its impacts may be over-emphasized in many localities. Natural mortality is far more prevalent than we may have realized and is capable of reducing fawn survival. It is easy to blame the predators that prowl your woodlot for declines in deer numbers, however there may be more to the story. The variable track record of predator control strategies highlights the incomplete picture of fawn survival on which we have been basing our management strategies. Such predator management may only treat the symptoms of fawn mortality rather than the root causes. 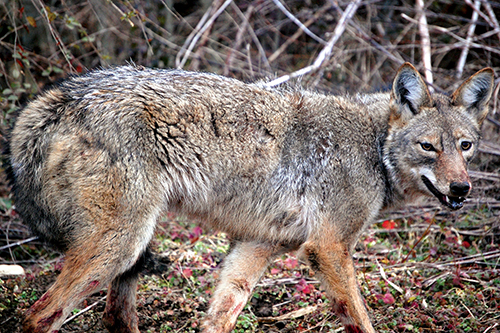 If fawn survival is low where you hunt, managing predator numbers may or may not help raise it. Habitat improvement and adjustment of doe harvest should also be considered.

An alternative strategy for increasing fawn survival calls upon the principles of Quality Deer Management. We believe the success of improving buck age-structure in herds across the country can be retooled to help increase fawn survival numbers. Selectively protecting the older age class of does during harvest will increase the number of mature does on the landscape. These individuals are the most successful at rearing fawns and more likely to increase fawn survival. Or, if managers are looking to reduce populations, targeting of these older individuals would have a compounded effect because, not only are you removing breeders, but you are removing the ones with the highest survival of their fawns.

About the Authors: Justin Dion is a graduate researcher, Dr. Jacob Haus is a postdoctoral research associate, and Dr, Jacob Bowman is a professor of wildlife ecology in the Department of Entomology and Wildlife Ecology at the University of Delaware. Joe Rogerson is the program manager for the Species Conservation & Research Program with the Delaware Division of Fish & Wildlife. This project was funded, in part, through a grant from the U.S. Fish and Wildlife Service’s Wildlife Restoration Program under award number F15AF00929.