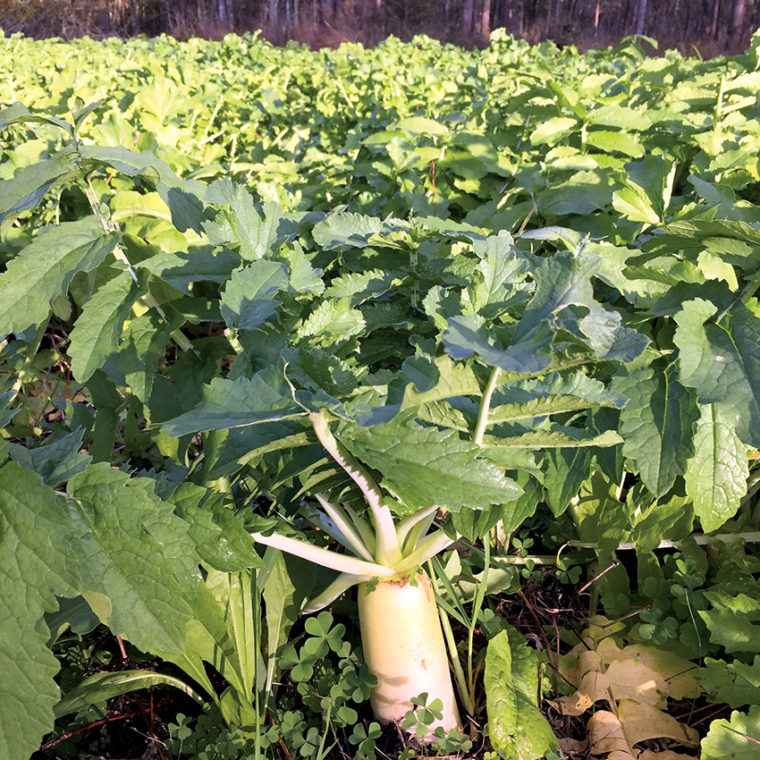 Although they have long been used as a livestock forage, brassicas came on the scene as a deer forage about 20 to 30 years ago. There are numerous species that belong to genus Brassica, and the more commonly used forages are rape, kale, turnips and radishes. Although many hunters and food plotters typically refer to these collectively as “leafy greens” or “brassicas,” each species has unique characteristics that may cause it to be better suited over another, depending on the situation.

Deer use of brassicas is probably best described as “variable.” If you talk to deer managers across the country, some tell you that deer won’t touch brassicas on their hunting land while others can’t seem to keep deer out of brassica plots. Perhaps this variation can be attributed to a combination of factors, such as the deer density of an area (more deer equals hungry deer), or the overall food availability on a given property, which is often correlated with deer density and weather factors, such as drought. Others have suggested deer need time to discover brassicas and that use will increase the following year if planted again. Whatever the reason, the variability is real, and you can’t predict how deer will use them on a given property until you try.

Brassicas are considered cool-season forages (planted in late summer/fall), but they also are commonly planted during the spring in the North. They are well adapted to cold weather and are most attractive to deer after a couple frosts. This allows them to provide quality forage during winter when many other species are less productive or dormant, particularly in the North.

Brassicas are adapted to a wide range of soil types but do not perform well on sites that are poorly drained with heavy clay soils. They are best suited for loamy soils that are well drained, particularly turnips and radishes that produce a bulb and taproot that are eaten by deer. Like most other forages, brassicas perform best with a neutral soil pH in the 6 to 6.5 range.

Another benefit of brassicas is they are fairly tolerant of dry conditions and hold up well to heavy grazing. Nutritional quality of brassicas is very solid. In well managed plots, brassicas contain 25 to 35% crude protein (varies by species) and approximately 15% acid detergent fiber, which means it is highly digestible and deer can utilize the nutrients efficiently. In fact, digestibility among the brassicas is typically at the top of the list when compared to other popular deer forages.

Brassicas are highly productive and produce a large amount of forage. In well-managed plots you can expect to produce 2 to 4 tons of quality forage per acre (dry weight), depending on the species as some are more productive than others. The leaves of brassicas take on many different forms depending on the species and the age of the plants. Leaves are typically pale green, thick, fleshy and lobed, reaching about 12- to 18-inches tall, depending on soil fertility and planting density.

Brassicas should not be planted in the same location within a field for more than two to three consecutive years. Periodic rotation will help prevent problems with insect and root diseases that commonly occur with brassicas.

Let’s dive in to some of the primary characteristics of the more popular brassica species below.

Rape is the most common brassica planted in food plots for deer. Dwarf essex is one of the most common varieties used in food plots. Rape germinates and grows very quickly. It is a very versatile forage and can tolerate cold, hot and dry conditions, making it more productive during times when other forages are not.

Primarily grown for high amounts of leafy forage and produces more forage than the other brassicas. It is extremely productive and can produce 3 to 4 tons/acre (dry weight) of top growth in well-managed plots. Kale is not well adapted to hot weather, and it tolerates cold weather better than the other brassicas. This is particularly valuable in the North where food availability can be limited during winter.

Turnips produce leafy green forage as well as a bulb that is consumed by deer. Deer use of top growth and bulbs will vary as they are not a preferred food source across the board. The forage contains approximately 25% crude protein while the bulb can contain 12 to 15%.

There are many varieties of turnips, and some produce more forage than bulb or vice versa. Turnips can produce a significant amount of biomass when factoring in production from the top growth and the bulbs, which can be in the 3 to 5 tons/acre range (dry weight). Bulb production is important if you wish to provide more food during winter as well as increase soil organic matter.

Radishes have numerous agricultural applications, such as breaking hard pans with their deep tap roots, improving overall soil health by increasing organic matter, and improving drainage. There are many varieties, but the white radishes like Daikon, Trophy and Tillage are commonly planted for deer. 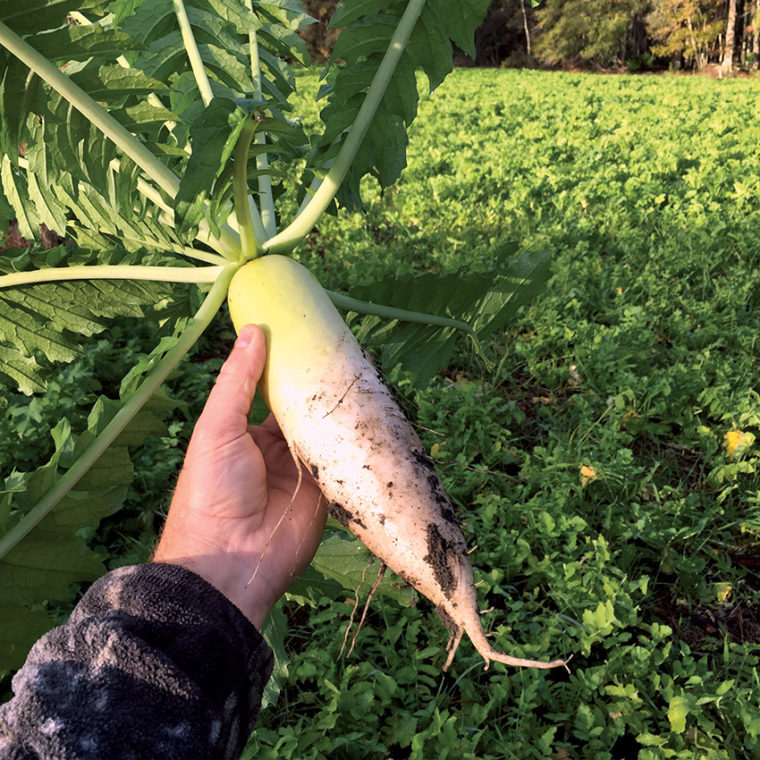 Radishes are brassicas that produce leafy forage as well as a large taproot, like the Daikon variety seen here. Turnips produce bulbs as well as forage. Rape and kale produce only leafy forage.

Radishes are typically more attractive to deer before a frost than the other brassicas, which can be an advantage early in the hunting season. Although deer readily consume the top growth, it is typically not highly preferred compared to some of the other cool-season forages. However, the taproot provides an excellent source of energy during winter.

Unfortunately, radishes are the least cold tolerant among the other brassicas featured here and can be killed when temperatures get down in the teens.

Brassicas have high fertility requirements to maximize forage production, attraction and nutritional quality. Apply fertilizer and lime according to the recommendations of a soil test.

Phosphorus and potassium fertilizer should be applied according to levels recommended from a soil test. Adding nitrogen at 60 lbs./acre at planting and then again a couple months later will significantly increase production. If legumes like clover or winter peas are planted with brassicas, skip the second nitrogen application as the legumes will provide additional nitrogen. It is also common for a soil test to recommend 1 to 2 lbs./acre of boron.

With regard to preparing the seedbed for planting, be sure the planting surface is smooth and firm before broadcasting seed. This will promote optimum germination and growth, resulting in a healthier stand that can better withstand harsh weather conditions, diseases, grazing pressure and weed pressure. If no-till planting (either drilling or top sowing), kill the existing vegetation with glyphosate a few weeks prior to planting to eliminate weed competition and create bare ground for good seed-to-soil contact. 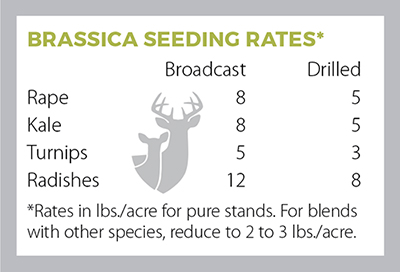 The seed of brassicas is extremely small, so the planting depth should not exceed ½ inch. I typically recommend planting brassicas alone or in mixtures with other brassicas as this allows for maximum forage production. Also, because brassicas develop fairly quickly with lots of leafy biomass, they can overcrowd and suppress lower growing or smaller forages. Thus, when mixing them with other species, such as clovers and cereal grains, it is important to reduce the planting rate to no more than 2 to 3 lbs./acre broadcast.

Brassicas germinate and grow rather quickly with lots of leafy biomass that can shade out competition. Weed pressure may not be an issue unless plots are heavily grazed early before the plants reach “canopy closure” to shade out the weeds.

If weeds are a problem, several good herbicide options are available. If cereal grains aren’t planted in the plot, grass competition can be eliminated with any grass-selective herbicide, such as Clethodim, Select Max, or Poast. Be sure to apply when weeds are small (3 to 6 inches) for best results, and follow the label for specific rates under certain conditions.

Alternatively, if broadleaf weeds as well as some grass weeds are problematic, Treflan can be applied preplant incorporated (sprayed on the soil prior to planting and lightly disked to incorporate the herbicide into the soil) at 1 to 1½ pints/acre. Since Treflan is soil active, it will control many grass and forb weeds before they germinate. It is best to conduct preplant incorporated applications when there is sufficient soil moisture or rain in the forecast in order to achieve better weed control throughout the life of the plot. Also, consider that Treflan (along with other herbicides that have residual soil activity) has a “minimum crop rotation length” for certain crops so read the label and consider future plantings in the field. It is very important to always read the herbicide label for safety precautions.