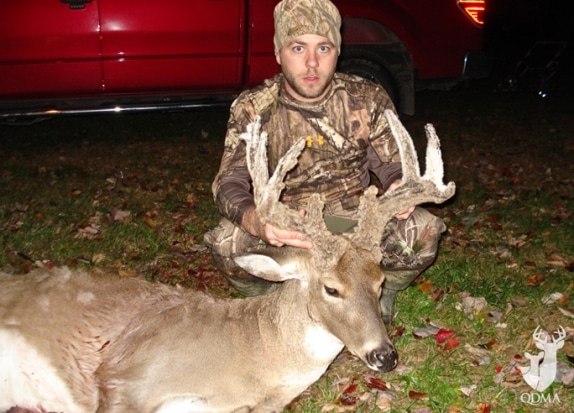 The hunt on Saturday November 9, 2013, was a heart-breaker for Ryne Wade of Marion, Illinois. A huge buck he had been after was in bow range when a doe winded Ryne and spoiled the opportunity. But the next morning presented another unusual opportunity when, after a brief staring contest, Ryne found himself drawing on a big buck he had never seen before (seen in the photo above). The heart-shot buck went 25 yards. Ryne knew the buck’s antlers had looked massive and unusually light colored, almost white, but he wasn’t expecting to find the deer was still completely in velvet during the peak of the rut.

When Ryne told his taxidermist about the velvet, the taxidermist explained what a rare buck Ryne really had, and he also guessed the buck didn’t have normal testicles.

“Of course he has testicles, he’s a buck!” Ryne told the taxidermist. “But then I went and looked at the buck. I’ve seen squirrels with a bigger sack than this buck had. It looked like he was born that way.”

This condition in whitetail bucks that results in antlers in velvet beyond the normal velvet-shedding date of late August to early September is usually caused by a birth defect known as cryptorchidism. In extreme cases both testicles remain in the abdominal cavity and never descend into the scrotum. The normal production of testosterone is diminished, and the antler cycle of hardening, velvet shedding, and antler casting is altered. These same results can sometimes be produced in a buck that is born normal but subsequently suffers a testicular injury.

In normal bucks, a rise in testosterone levels occurs in late summer with increasing day length. A buck responding to late summer’s photoperiod (exposure to daylight) experiences a change in behavior due to the sudden elevation in testosterone in his system. The bachelor groups that have been together since early the previous winter begin to separate due to more aggressive attitudes among the individuals. Antlers harden, the velvet is shed, and bucks continue to rub their antlers (and forehead glands) on bushes and small trees as a means of scent communication known as signpost behavior. As days begin to get shorter, a buck’s testosterone level declines. Their antlers are shed, and the bucks become much less aggressive, and bachelor groups form again. Having lost his protective headgear, a buck has obvious survival advantages in being a member of a bachelor group

Cryptorchid bucks are different. They don’t participate in the seasonal rituals of normal bucks. Because their testosterone levels remain low in early fall, their antler development is not completed, and their velvet is not shed. Cryptorchid bucks don’t participate in signpost behavior by making rubs or scrapes. They lack the chemical stimulation to express their dominance and individualism. The tarsal glands of cryptorchid bucks are rarely stained because the bucks do not rub-urinate. Also, the necks of cryptorchid bucks do not swell as the breeding season approaches. Reproductively, they are in neutral. Antlers are not shed, and they remain in velvet year round. Furthermore, the antlers continue to grow as the animal matures.

Cryptorchid bucks are incapable of reproducing. If allowed to mature, obviously they have the potential to provide a memorable, quality hunt.

Joe Hamilton is a wildlife biologist and the founder of the Quality Deer Management Association (QDMA). During his nearly 20 years with the South Carolina Department of Natural Resources, Joe helped implement QDM practices on more than 2 million acres. In 2000, he was awarded the Deer Management Career Achievement Award from The Wildlife Society. In 2011, he was named Conservationist of the Year by Budweiser Outdoors. He currently serves as Senior Advisor for QDMA.