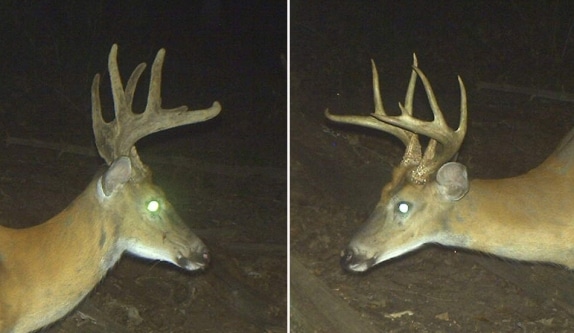 Like so much that happens in the cycle of the whitetail’s year, the timing of bucks shedding their antler velvet is closely tied to photoperiod (the number of hours of daylight in a day). Decreasing photoperiod in late summer triggers increasing testosterone levels, which leads to antler hardening and then velvet shedding.

Interestingly, bucks began shedding a full week earlier this year where I hunt in north-central Pennsylvania. How do I know this? I conduct an annual 14-day baited trail-camera survey every summer that always ends Labor Day weekend. Thus, the start date varies slightly, but it is always in late August. In addition to the great information the survey reveals about deer density, adult sex ratio, buck age structure and fawn recruitment rate, I also gather a ton of interesting anecdotal information like travel patterns of specific bucks, antler quality, and velvet shedding dates.

The chart below shows my survey start date, the first date a velvet-shed buck was photographed, and whether the first shed buck was young (1.5 to 2.5 years old) or older (3.5 years or older) based on body characteristics, for the past five years. This analysis does not suggest other bucks that I did not photograph did not shed sooner. However, given that I conducted the trail-camera surveys using the same method at the same five bait sites at the same relative time for each of the years listed, and photographed an average of 20 unique bucks each year, I’m pretty confident the bucks using my family’s property shed earlier than usual this year.

Some have suggested that early velvet shedding is drought related. I disagree, as we are dry, but we’re much luckier than most of the country, and we’ve had more rain this summer than we did during summer 2011. Whatever the reason, it is fun to monitor this cycle, and we’re blessed to watch hard-antlered bucks a little sooner than normal this year!