Buckwheat is an easy-to-grow, warm-season annual that is useful in sandy soils, remote food plots, or in blends with other warm-season crops. It also helps improve food plot soils by building soil organic content.

Buckwheat can be planted as a warm-season forage crop with cowpeas, grain sorghum or soybeans and also as a stand-alone crop. Because of its early competitiveness it is not useful as a companion crop while establishing cool-season legumes such as alfalfa or clover. It is easy to grow in areas with little or no seedbed preparation, so it is ideal for that isolated, hard-to-reach hunting plot. It can be planted in spring, but it is also useful for deer managers who get the itch to plant a late-summer plot in July or August.

This warm-season annual can grow in low-fertility, light-textured, well-drained soils. Buckwheat performs best in a cool, moist environment and is best suited for the Northeast or upper Midwest but can be planted in many areas of the South. It’s useful as a soil-builder: Once it matures and goes to seed, plowing it under increases organic matter and returns phosphorus and other minerals from the remaining root and plant residue.

Buckwheat is relatively short-lived and will provide some temporary forage benefits for deer. It offers digestible protein values ranging from 9 to 20 percent depending on soil fertility and pH. Buckwheat does not produce as much forage or the high levels of protein that legumes like cowpeas or soybeans do. It will mature in 7 to 10 weeks, creating a seed source for turkeys and other game birds.

Though buckwheat is useful in rough, remote plots, it certainly performs better in plots with good seedbed preparation and fertility. Seed buckwheat by broadcasting or drilling 1- to 2-inches deep. Summer planted buckwheat establishes rapidly and competes well against broadleaf weeds and grasses. Since it grows rapidly, you can plant in late summer and produce hunting opportunities for early bow season. I wouldn’t hesitate to plant in August or even in September in the South.

I had good results one June by planting buckwheat with a no-trill drill into an existing stand of oats that I had left for turkey brood habitat through the spring. Before planting the buckwheat, I sprayed the plot with glyphosate to kill weeds.

I have also found buckwheat to be useful as a soil-improvement crop on infertile logging decks that I wanted to prepare for cool-season perennial plots. I first performed primary and secondary tillage (subsoiling and disking), limed accordingly, then broadcast buckwheat at 50 lbs./acre in early July. With a little luck and timely rains I was fortunate to produce a respectable crop of buckwheat even though grazing pressure increased as deer learned about the crop. In late September I plowed the buckwheat  under and planted a mixture of white clover, chicory and oats. I feel confident that the combination of proper tillage, liming and the “green manure” provided by the buckwheat helped improve the production of my fall crop on a marginal soil site.

About the Author: Brian Sheppard is a food plot consultant from Georgia and owner of Wildlife Landscape Services. This article is one of several he has contributed to Quality Whitetails magazine. 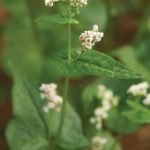 View all Articles By Brian Sheppard