Burn Outside the Box: Try Prescribed Fire at a New Time of Year 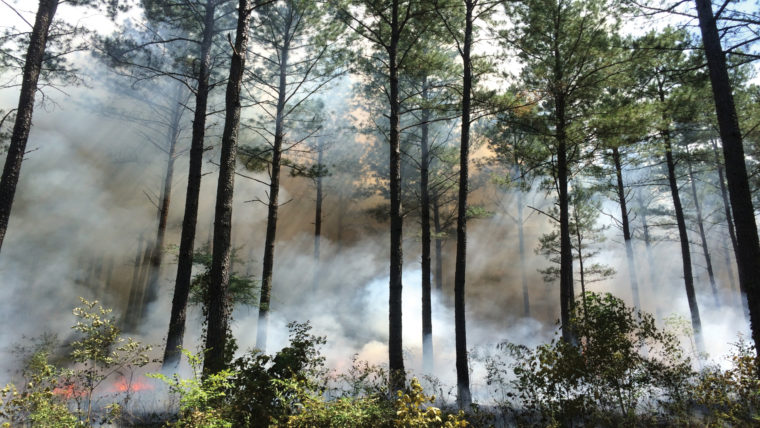 What do wildfires and prescribed fires have in common? Not much. Most fires we hear about in the media consume thousands of acres of forest at a time, threaten communities, and take weeks or months to extinguish. Wildfires differ drastically from fires we prescribe to meet specific land management objectives.

One of the many ways wildfires differ from most prescribed fires is the time of year they occur. Wildfires typically burn in the driest months of summer and are ignited by lightning or accidentally by people. Long before we heard news reports citing discarded cigarettes as the source of wildfires, lightning-strike fires burned in early summer, and Native Americans used fire at all times of year to manage the land. Although historical fires primarily burned in the early growing season in the Southeast, most prescribed fires nowadays occur in late winter or early spring because of more predictable wind, smoke dispersal, and fuel moisture conditions.

As bowhunters, we rely on the structure of plant communities to successfully execute a close-range bow shot, so the more structural diversity on a property, the more options we have for ambush locations.

The wildlife and plant communities of some regions of the United States, especially much of the Southeast, evolved with fire, and many critters rely on fire to restore and maintain plant communities they need to thrive. Fire was the historical disturbance that reset plant succession and maintained high-quality habitat for a plethora of wildlife species. Without fire, grasslands transition to forests, and forests dominated by oak and hickory yield to less fire-adapted species like red maple, American beech, and tulip poplar.

Our ecological knowledge of fire’s effects and benefits has come a long way in the last few decades, but dormant-season fires still dominate prescribed fire programs even though the majority of the fires that our plant and wildlife communities evolved with occurred in the growing season. Are all fires equal? If not, does it matter to wildlife?

The Mississippi State University Deer Lab partnered with the Mississippi Department of Wildlife, Fisheries, and Parks to conduct a series of projects to answer those questions. Phase one was designed to quantify how June prescribed fire (or “lightning season”) impacted forage quantity and quality for white-tailed deer compared to March prescribed fire (dormant season) in thinned pine stands. Graduate student Rainer Nichols found June fire significantly increased the nutritional quality of plants during late summer compared to March burns and unburned areas. After deer benefited from the normal spring green-up, the June fire created a second surge in plant quality during late summer. Deer experience the greatest nutritional demands in summer because late gestation and lactation for does and the final antler growth spurt for bucks requires nutrient-dense food when it’s typically limited in supply.

it’s a general rule of thumb that fawns drop at the time of year that optimizes their first-year growth – which is late spring up north, so they can have maximum time to grow large enough to survive their first winter. Southern populations aren’t faced with the same drivers, and it may be that our late fawning season in the Southeast is an adaptation to a historical nutritional surge in plant quality following the growing season fires frequently ignited by lightning. Without fire, the most nutritionally demanding time period for southeastern deer populations occurs a few months after the best available nutrition associated with green-up. 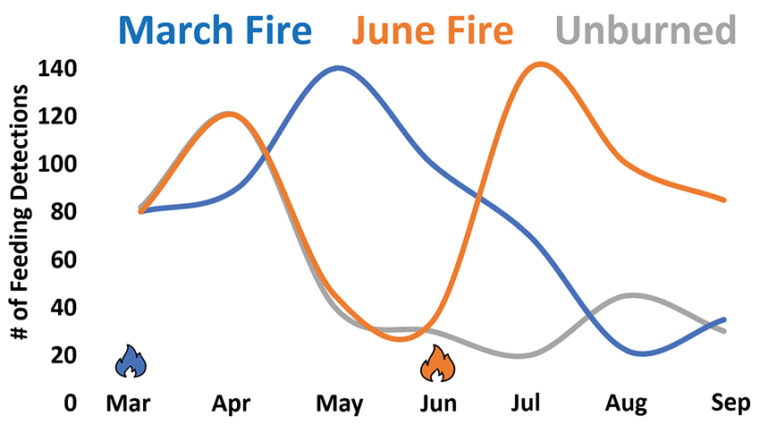 Deer followed forage quality rather than quantity. Trail-camera pictures of deer feeding peaked about two months after each burn. In March burns, deer fed the most in late April and early May, and they fed in June burns most in July and August.

That led us to think that part of a fire-adapted deer population’s reproductive strategy is to drop fawns, grow antlers, and pack on pounds for the rut as plants are resprouting after fire and providing high-quality nutrition. Young plant tissue is more nutrient-dense and digestible than older growth, and by mid-to-late summer, most plants devote their resources to reproduction rather than growth, resulting in low nutrition during a time of year when deer need high-quality nutrition most. June fires hit the “reset” button at just the right time and provide deer with high-quality forage during late summer. Although plants in March burns weren’t as nutritious, March fires did produce more forage and cover biomass than June fires, both the year of the fire and one-year post fire. We assume this is because plants had two growing seasons compared to one full growing season for plants in June-fire areas.

We also used trail-cameras to monitor deer use and found that deer follow forage quality rather than quantity. Pictures of deer feeding peaked about two months after each burn (see the graphic above). In March burns, deer fed the most in late April and early May, and they fed in June burns most in July and August. Although deer need high-quality forage in April and May, that time of year coincides with spring green-up, which is when nearly all plants are actively growing and high quality, with or without fire.

Three growing seasons after the 2018 burns, we started the second phase of the project to identify longer-term effects of fire season on sapling mortality and understory plant species composition. Woody invasion into areas with high coverage of grasses and forbs is an important consideration in the Southeast because high annual rainfall and long growing seasons allow forest succession to rapidly advance. Without fire, these areas quickly transition from early successional plant communities dominated by grasses and forbs to closed-canopy forests dominated by trees and midstory shrubs that provide poor cover and forage.

We found that June fires had about half the number of tree saplings as March fires, and March fires had the same number of saplings as unburned plots. Species such as red maple, a poster child for woody invasion, experienced 1.5 times greater mortality after June burns than more fire-tolerant species like cherrybark oak. Coverage of other species such as sweetgum and winged sumac increased after March burns. How many people have a goal of increasing sweetgum coverage? Hopefully not many.

We also found that June fires had two times the forb coverage of March fires and nearly three times that of unburned plots (see the graphic below). Although there’s some evidence that growing-season fire tends to increase forb coverage more than dormant-season burns, we attribute most of the increase to reduction in sapling density and subsequent increase in sunlight, nutrient availability, and space for forbs. That’s a huge increase in high-value forage and cover plants! Keep in mind this increase in forb coverage was three growing seasons after fire. Rainer documented lower forb coverage in June than March burns during the same year as fire, and forb coverage didn’t increase until two years post-fire.

Three growing seasons after fire, areas burned in June had two times the forb coverage of March fires and nearly three times that of unburned plots. That’s a huge increase in high-value forage and cover plants!

Bring it Home to Your Woods

So how do you apply this information to your deer management efforts? You guessed it: diversify fire timing if you can.

Deer need diversity, and fire during different seasons contributes to structural and compositional diversity in plant communities. Deer are necessarily tied to plants. They eat them. They bed in them. They drop their fawns in them. They evade predators in them. The more structural and compositional plant diversity on your property, the more freedom deer have to choose cover and forage resources that meet their seasonal demands. We can’t always predict every specific need, so providing plant diversity allows your deer population to access whatever they need, when they need it. As bowhunters, we heavily rely on the structure of plant communities to successfully execute a close-range bow shot, so the more structural diversity on a property, the more options we have for good ambush locations.

Burning outside the traditional dormant season is not only beneficial but often necessary. Growing season fire does more than increase available nutrition and reduce hardwood invasion: it expands your burn window. There are only so many days per year you can get fire to safely carry, and even fewer days that your schedule allows you to light one in the first place. Constraining all of your burning to the dormant season can make it difficult to get your target acreage burned and limits your ability to use fire timing to your advantage in manipulating plant communities.

Which options match your objectives?

Growing season fire is an effective tool if you manage piney woods like those where our studies were conducted, but getting fire to carry beneath closed-canopy hardwoods is a different story. It may be impossible to burn some hardwood stands in the growing season, especially if a closed canopy prevents sunlight from drying out fuel on the forest floor. If an herbaceous understory with flammable grasses and forbs isn’t present, your prescribed fire window in hardwoods may be restricted to fall and late winter.

If you’re new to prescribed fire or have very few days you’re able to burn, the most important piece of the puzzle is to burn. As long as fire is part of a carefully constructed management plan, burning at any time of year is better than not burning at all. But, if reducing sapling density and increasing forb coverage is an objective of your program, add growing season burns into your management plan. If increasing browse and woody cover is an objective, burn during the dormant season. If increasing an area’s attractiveness during the fall to get a close-range bow shot is an objective, burn during late summer to stimulate new plant growth during early hunting season. There’s no one-size-fits all approach to anything in wildlife management, including a fire program.

Bottom line: If you have specific objectives, which you should anytime you’re managing woods, fields, or wildlife in general, then you can use fire timing to help you meet those objectives. Stay tuned for the third phase of this project that’s currently underway where we’re looking at if and how we can use firing technique to meet certain objectives.

About the Author: Luke Resop is an NDA member and a graduate research assistant in the Mississippi State University Deer Lab. His research focuses on deer habitat management and adult buck movement. He earned his bachelor’s degree in wildlife conservation from Virginia Tech. His co-authors on this project and article included Rainer Nichols, Dr. Steve Demarais, Dr. Bronson Strickland, and Dr. Marcus Lashley.

View all Articles By Luke Resop