It’s a question as old as blaze-orange vests and caps. Hunters worry that their required safety-orange apparel will give them away to the sharp eyes of deer.

After much research into deer vision capabilities and the physical structure of deer eyes, University of Georgia researchers Dr. Karl V. Miller and Dr. Gino D’Angelo wrote an article in QDMA’s Quality Whitetails magazine on their findings. For the article, Karl and Gino attempted to put on “Deer Goggles.” Taking what they learned about deer and human focal perspectives, fields of view, and color perception, they used photo editing software to create the two views you see above of a hunter in a woodland scene (The image above shows a small part of each image, so be sure to click on the complete comparison in the Gallery below). Though not intended to show you exactly what the world looks like to a deer, the comparison helps explain how deer view the world differently than we do, and it helps answer the question: Can deer see hunter orange?

First, Karl and Gino explained why the human view of the scene looks the way it does:

“With the human eye focused on the hunter’s face, the human optic fovea provides crisp detail, but only in a very small circular area. In the areas of peripheral vision, everything is out of focus and detail suffers. Human vision is capable of perceiving the long-wavelength reds and hunter orange.”

This is easy enough to understand, because we have human eyes. We are predators and are capable of focusing on forward objects. Our binocular overlap (the area that both of our eyes view at the same time) is 140 degrees, allowing us to focus on single points and perceive depth very well. A deer’s binocular overlap, however, is only 60 degrees, giving them relatively poor depth perception.

“Deer must shift their head to gain a three-dimensional perspective of an object by looking at it from several different angles. This is probably the main reason why deer bob their heads when they encounter potential danger.”

Of course, deer have less binocular overlap because their eyes are on the sides of their heads, bringing the advantage of a wider field of view. Without moving their heads, deer can see nearly 300 degrees of their surroundings, leaving only a 60-degree blind spot to the rear. This gives them the ability to detect objects around them in a wide visual strip. Though fine detail is not a deer’s strength, they are very good at detecting outlines and movement in their surroundings.

“With substantially fewer cones in their retina compared to humans, everything would appear ‘grainy’ to the deer, like a photograph taken with very high speed film. In the area of the horizontal visual streak centered on the hunter’s face, the deer’s acuity is somewhat enhanced and they gain more detail. Deer would not perceive the longer wavelengths of color, so the oranges and reds have turned to brown or gray. This photograph was taken just before sunset when UV rays are at their peak. To the deer’s visual system, the short wavelength blues are enhanced and are visible on the right side of the trees in the direction of the setting sun. The hunter is wearing a new, unwashed pair of camouflage pants. Also visible to the deer are the UV enhancers glowing from these pants.”

“The human lens and central portion of the retina have yellow pigmentation to absorb and filter out UV light from the sun, which also filters some blues and violets. The lens of deer is perfectly clear, and they lack yellow pigmentation in their retina. Deer, being short-lived as compared to humans, do not need such protection from the sun. The absence of these filters allows them to capitalize on the additional light available from the shorter wavelengths of light. Coincidentally, these colors of light are most abundant when the sun is below the horizon at dawn and dusk when the deer’s ultra-sensitive rods are functioning. This gives them a distinct advantage when they’re moving to and from their bedding areas at these times.”

The answer to our question is: No, deer cannot see blaze orange the same way that humans see it. It likely appears brown or gray to deer. But they are more sensitive to blue wavelengths than humans, and probably to clothing that has been washed in detergent that contains UV brighteners. But what is more important than worrying about your orange vest or other colors is worrying about your silhouette and movement. Notice that the hunter in the Deer Goggles example is standing in the open, on the ground, making no effort at concealment or to break up their outline using natural cover. Even wearing camo, this hunter will be easy for a deer to spot.

“Because of the deer’s limited acuity and poor depth perception, you need not be overly concerned with the fine details of camouflage patterns. Instead, set up with a sufficient background of cover similar to your attire. Focus on breaking up your human form by playing on the major visual themes common in most natural scenes – muted colors and large visually distinct elements. Most importantly, move wisely. Deer are especially well adapted to detect movement. If you can see a deer’s eyes, they are sure to capture any movements you may make.”

Study the comparison in the image below, showing a human’s perspective in the top compared to what a deer likely sees in the bottom, based on what we know about the structure of the whitetail eye. 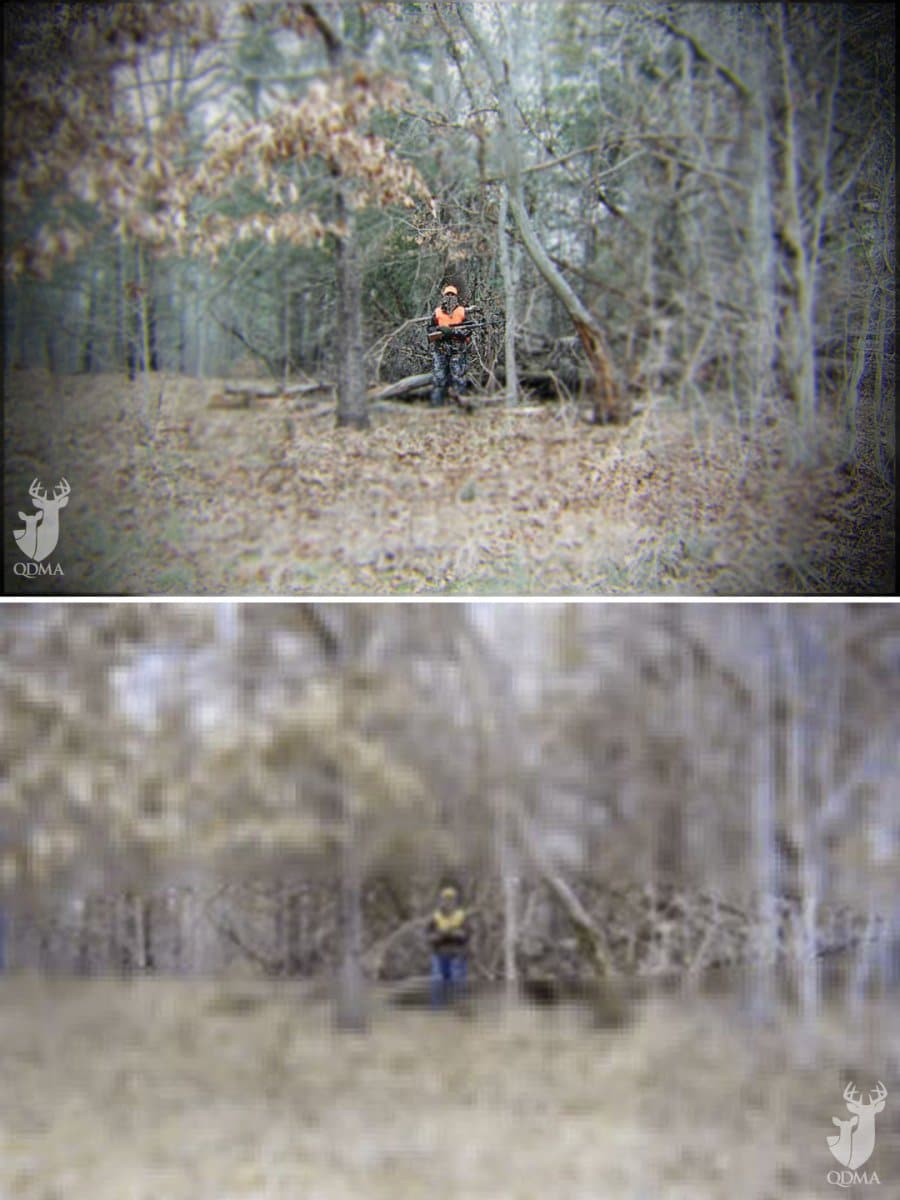