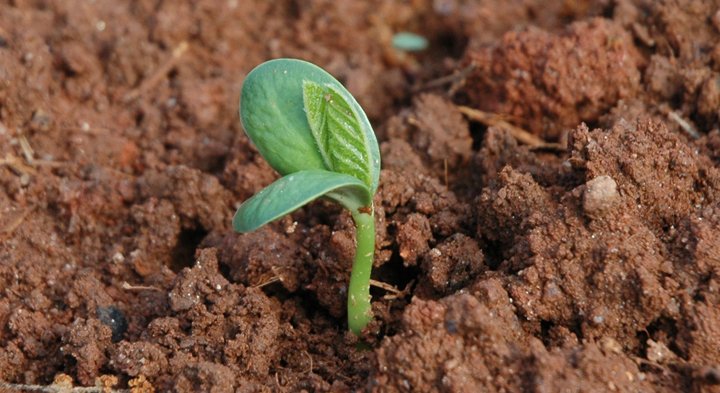 When deer populations become locally overabundant, deer browsing on plants can have negative effects on plant establishment, survival and productivity, which can hinder or prevent the establishment of a food plot — particularly with warm-season legumes like soybeans. Overgrazing can wipe out a food plot before it achieves its mission, whether that be attraction for the hunting season or nutrition for winter or late-summer stress periods.

Repellents are used intensively in orchards, gardens, ornamental plants and farm crops to reduce deer damage, and these products and methods generally rely on fear, pain, taste, or conditioned avoidance. New repellents are continuing to enter the market, and their effectiveness varies — total elimination of deer damage is probably unrealistic with most products. Success should instead be measured in the reduction of deer damage. For food-plot farmers, the goal is to repel deer long enough to establish the crop; once the crop is mature enough to sustain greater browsing pressure, use by deer is welcomed.

There are three methods to deliver repellents; repellents may be incorporated into the plant, applied directly to the plant or spread throughout or surrounding an area. The effectiveness of any repellent will vary depending on several factors, including deer density, availability of alternate food resources and seasonal changes in plant palatability.

An ideal repellent would provide plants with temporary protection from over-browsing and would be harmless to people and animals, inexpensive, and easy to apply. Scare devices, chemical repellents and temporary fencing can be effective strategies to control deer damage. However, a repellent that can be easily applied and would provide protection for a limited time would be wonderful in helping to establish a food plot.

Casual observations by others have suggested that Milorganite might be effective as an area repellent for use in the spring and summer to control deer damage. We wanted to test this notion and see if we could keep deer off our plants long enough for the plants to become established. Of course, once established we wanted the deer to visit our food plot.

Milorganite is a slow-release, organic fertilizer produced from human sewage. In 1913, researchers were faced with a problem of how to dispose of the biosolids left from processing sewage sludge. After experimenting with field crops, vegetables and lawns, researchers concluded that this organic, slow-release fertilizer can be safely applied to plants, without the risk of burning, while providing long-lasting results.

The trade name, Milorganite, was derived from MILwaukee ORGAnic NITrogEn, as it is the treated byproduct of the Milwaukee, Wisconsin, waste treatment plant. This product is often used for soil amendments rather than a fertilizer because of the low nitrogen/phosphorus/potassium values of 6-2-0. The cost per 40-lb. bag usually runs from $7 to $10. Milorganite is commercially sold by fertilizer dealers and at large home centers throughout the United States, and there are similar products under different brand names produced by other waste-treatment plants around the country. The product itself looks like No. 7 1/2 shot or smaller. It has a slight odor, but it is not offensive. Since deer have a sense of smell that is many times more sensitive than our own, it is thought that Milorganite repels deer by smell.

To test Milorganite as a repellent, we planted two plots of soybeans on five rural properties in north Georgia and monitored them for more than 30 days. One plot at each site was treated with Milorganite, and one plot was not treated. The plots were one-half acre in size and were separated by anywhere from 25 to 300 yards of natural vegetation so the Milorganite in the treated plot would not affect the untreated test plot. We limed and fertilized the food plots at the time of planting according to soil-test recommendations, then we applied the repellent as soon as the first soybeans emerged from the ground. Each test plot was treated with Milorganite at the rate of 240 pounds per acre (about 120 pounds on our half-acre food plots), and we broadcast the Milorganite using the fertilizer spreader on the back of our tractor. A nice feature of this product is that it can also be spread by hand or with a hand-crank seed spreader.

On each of the five treated plots and five untreated plots, we marked off sampling areas of five rows with 100 plants in each row. At each sampling date, we counted the number of plants missing from each row. There were notable differences between the percentages of plants removed among the five plots where Milorganite had been applied — one plot in particular was located in a region with very high deer density, and the treatment was least effective in that plot. However, overall the treated plots were browsed less than the untreated plots, particularly during the first 14 days after treatment. The average percent of plants browsed on the five treated sites three days after first plant emergence was 24 percent. On the five untreated sites measured at the same time, the average number of browsed plants was 54 percent.

From these results, we concluded that Milorganite is an effective temporary deer repellent for use in food plots. Though the repellent does not eliminate deer damage, and though its effectiveness dissipates with time, it reduced the overall impact compared to the untreated plots. The effectiveness of the repellent is highly dependent on weather — Milorganite may be less effective in dry weather, while rain seems to enhance or reactivate the odor and the repellent effect. Local deer density and resource availability such as alternate food sources in the area will also have an impact. Milorganite may be less effective as a repellent where there are high deer densities, low availability of other food sources and when weather conditions are extreme.

Reduction of deer damage may further increase if Milorganite is reapplied at day 14, and further research in this and other areas is needed. Our results suggest that landowners, farmers and sportsmen may be able to establish soybeans in a food plot if Milorganite is applied at planting but before damage begins to occur.

About the Author: Odin Stephens completed this study as part of his graduate research to earn a master’s degree in wildlife management from the University of Georgia. Other contributors to this study and article include Dr. Mike Mengak, an assistant professor and wildlife specialist, and Dr. Karl Miller, a professor of wildlife ecology and management, both at the D.B. Warnell School of Forest Resources, The University of Georgia.