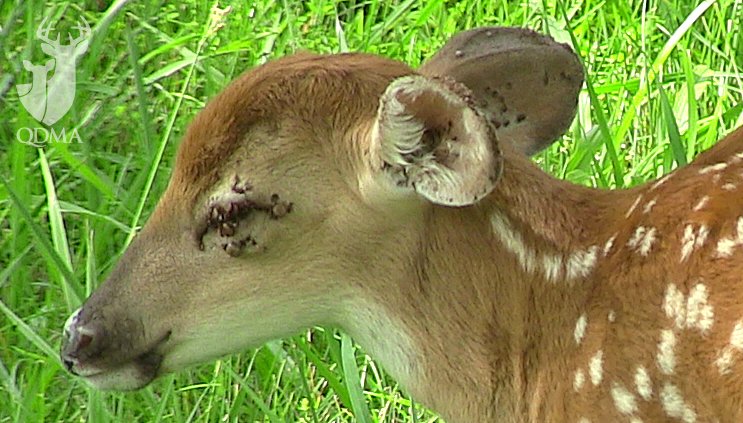 A Missouri fawn photographed on June 1 by Sam Leatherman is a reminder of the impacts parasites can have on deer. The fawn can only be a few days old, yet its eyes and ears are already encrusted with ticks. People who witness fawns in this situation often ask QDMA whether ticks can affect fawn survival.

The short answer: Yes they can.

According to The Field Manual of Wildlife Diseases in the Southeastern United States, a comprehensive guide published by SCWDS, “…heavy infestations of [ticks] may produce fawn mortality up to a reported estimate of 30 percent.” While disease and predation are the most popular theories where deer populations are lagging, more likely there are a number of factors impacting recovery efforts. Parasites such as ticks could be one potential factor in locations where tick populations are dense.

In 2012, I encountered 33 fawns that had become blinded in both eyes due to the onset of infection from the high volume of ticks surrounding the eye socket. Unfortunately those fawns were euthanized after efforts to improve their condition failed. While 33 isn’t a large number over a broad landscape, that number came from a single Missouri county, a scenario that played out through many other counties of Southern Missouri that year. One fawn that I and a wildlife rehabilitator worked to save had 316 ticks removed from the right eye and 257 from the left! So, while most deer managers highlight the impacts of hemorrhagic disease during 2012, I also reflect on the impact ticks had on our future standing crop.

Tick populations are cyclical in response to their host, commonly deer. High or focused deer populations can lead to increased tick numbers. This was highlighted by another article on QDMA.com investigating whether fire can aid in the reduction of ticks. A landscape approach to habitat and deer management is one possible solution. Through a broad management approach, deer and tick populations should be more naturally distributed, minimizing the influence on the herd. This means high-quality habitat, adequate nutrition year-round, and the right number of deer for the landscape – in short, Quality Deer Management!