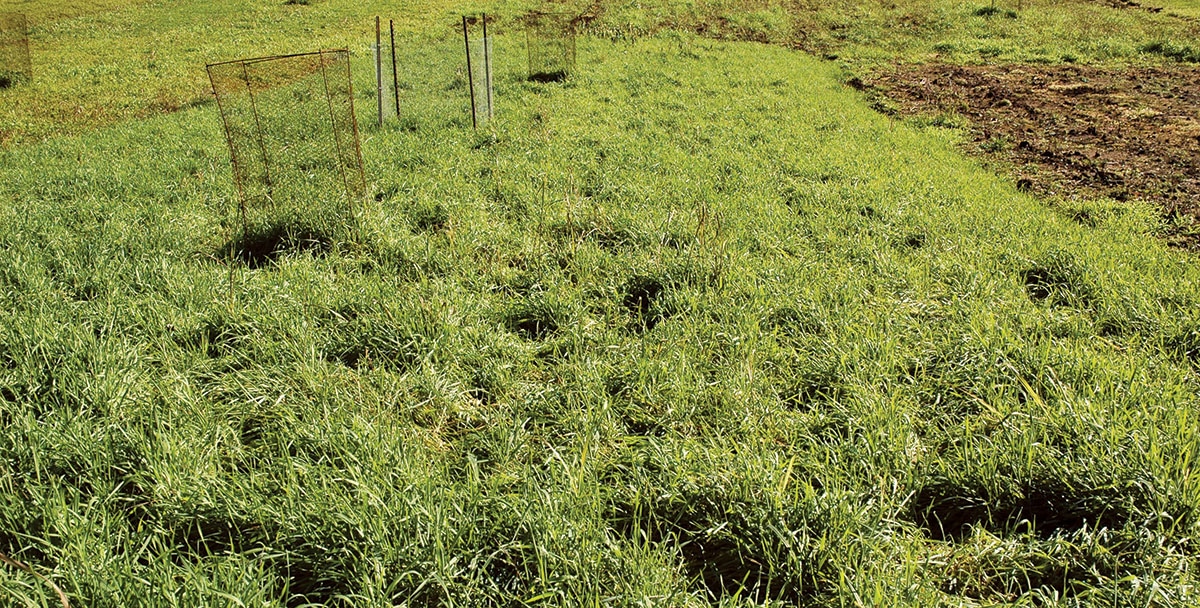 If there was ever a tough-man competition for deer forages, cereal rye would likely make the title bout. Cereal rye (rye hereafter) is a durable forage that can overcome adversity on many levels, such as extreme cold, drought, poor soil fertility, sandy soils, and heavy grazing pressure. Although rye may not always be the best option for food plots managed for deer and other wildlife, there are several scenarios where it fits perfectly.

Not to be confused with ryegrass, cereal rye (Secale cereale) is considered a cereal grain and is very similar in appearance, initial growth, production, and use as wheat, oats, and triticale. All are high-preference forages for whitetails.

Rye is considered a cool-season annual cereal grain that germinates very quickly, is highly preferred by deer, and has excellent resistance to grazing pressure. In forage trials I helped conduct across Tennessee, rye consistently ranked second to oats when comparing deer selectivity of the different cereal grains. However, don’t be overly concerned with how rye ranks among the other popular cereal grains, because deer prefer wheat, oats and rye. That is, you will not notice more or fewer deer using a plot of rye than you would a food plot planted in wheat or oats (unless you hunt up north and your oats get winter-killed!). However, there may be some advantages for you to use one over the other, depending on what you are trying to accomplish.

If soil pH and fertility are managed properly, rye can provide high-quality forage with high protein levels and digestibility. In well managed plots, crude protein is typically in the 20 to 25 percent range from fall through spring, prior to maturity. It also can tolerate soil acidity and low fertility better than the other cereal grains.

Rye is very cold hardy and can be grown anywhere in the United States. In fact, it is the most tolerant of harsh winter conditions of any of the cereal grains mentioned here. Surprisingly, it is also drought tolerant and performs well in sandy coastal soils. Forage production can exceed 7,000 lbs./acre dry weight, which is the greatest among the cool-season cereal grains.

When mature, rye can reach 5 feet in height or more, so consider the desired structure and goal of your plots before planting it. This can be a problem when mixing other forages in the plot, such as clover or chicory, as rye can outcompete them if the seeding rate is not significantly reduced. For this reason, wheat or oats would be better cereal grains to blend with perennial plots.

Rye can also be problematic because when it matures in late spring/early summer, it leaves a large amount of debris on the plot that will have to be addressed if you intend to plant summer crops in the same field. However, this debris can be an advantage if planting summer crops with a no-till drill, as this will increase the amount of organic material in the soil.

Lastly, deer do not readily eat the seed head of rye, like they do wheat. Thus, if you plan to leave the plot fallow through the summer after cereal grains mature, it would be sensible to use an awnless (or beardless) variety of wheat so deer can benefit from eating the seed heads, which extends the life of the food plot well into the summer.

Always conduct a soil test prior to planting to determine lime and fertilizer requirements specific to rye and other forages you plan to include with them. Although rye does relatively well on poor sites with low fertility, it performs best and provides higher quality forage when the soil pH is 6.0 or greater. Just because a particular species may be able to withstand relatively low-quality soils does not mean you don’t need to amend the soil with lime and fertilizer. Providing optimal soil conditions will maximize production, attraction, and nutritional quality of any crop in your food plots. Nitrogen, phosphorus, and potassium should be applied at levels recommended by the soil test. Adding 50 lbs./acre of nitrogen after establishment (late fall) will boost production and attraction through winter.

Like other cereal grains, rye is very easy to establish and can either be broadcast at 120 to 150 lbs./acre into a well prepared seedbed or drilled at 70 to 80 lbs./acre if planting alone. Rye should be planted in late August/early September in northern regions. In the South, rye should be planted in September or October when there is adequate soil moisture or rain in the forecast.

As long as rye is not planted too dense, it does well in mixtures with other annual forages, such as crimson, arrowleaf, and berseem clovers, winter peas, or brassicas. I prefer clovers because they can extend the life of the plot after rye matures. When mixing with other forages, be sure to reduce the seeding rate to 30 to 40 lbs./acre (broadcast). Otherwise, rye will smother the other forages by late spring/early summer. One mixture that works well in the extreme northern reaches of the U.S., especially areas that typically receive abundant snow, is 100 lbs./acre of rye plus 4 lbs./acre of rape or kale.

I don’t recommend including rye in perennial clover/chicory plots as a nurse crop because lower growing perennials need adequate space and sunlight for strong production during summer. Wheat or oats are better suited for this because they don’t get as tall when mature. Plus, if wheat is used, you have the added nutritional value of the seed heads the following spring/early summer for deer.

If broadcasting seed, be sure to create a smooth, firm seedbed to ensure optimum germination. Seeds should be lightly disked into the soil 1 to 2 inches deep or drilled at about an inch. If no-till planting, be sure to kill the existing vegetation with glyphosate a couple weeks prior to planting to eliminate weed competition.

Ryan Basinger of Alabama is a certified wildlife biologist and the Wildlife Consulting Manager for Westervelt Wildlife Services. He has a broad range of professional experience managing wildlife populations and their habitats on public and private lands throughout the Southeast. Ryan has conducted research on a variety of species and habitats where he examined the effects of various forest management techniques on browse production, availability, preference, and nutrition for white-tailed deer. Ryan also has conducted extensive food plot research where he compared production, nutrition, preference, and availability of various forages planted for deer. He earned his bachelor's degree in wildlife science from Mississippi State University and his master's in wildlife management from the University of Tennessee.