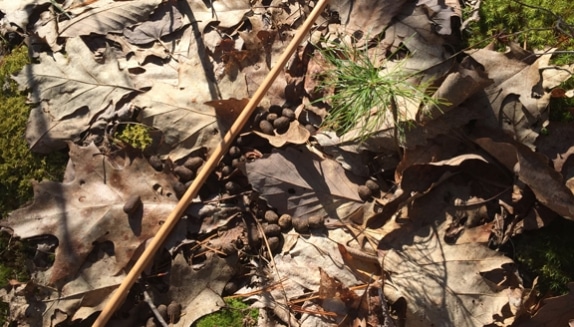 The snow is gone, and that means it’s time to collect some data on the deer herd. How many does should you shoot this fall? Take the first step to answering that now with a spring pellet survey. This is not a camera survey – I’ll do that this summer. This is not an observation survey – I’ll do that this fall. This is a pellet-count survey, and it will estimate the number of deer that used our farm during last fall and winter. This estimates the number that was around throughout hunting season and provides a great comparison to the number estimated during late summer by my camera survey. Pellet count surveys are conducted after the snow melts and before the trees leaf out.

Pellet count surveys are great because they provide deer density data, great exercise, and a good chance for you to explore your property and look for shed antlers, dead deer, and changes that occurred to your habitat during winter. They also provide the perfect opportunity to simultaneously conduct a browse survey to estimate the level of impacts deer are having on your future forest, and to scout for turkeys as most turkey seasons have started or are just around the corner.

Once your transects are laid out, you’ll need a compass, a 4-foot long stick, and a pad and pencil for recording your data. Start on your first transect and walk 100 feet, then stop. This is your first survey plot. Use your stick to measure a circle with a 4-foot radius at the exact spot you stopped and count the number of pellet groups (deer scat) within that circle. Record that number on your pad. There must be at least 10 pellets in a single group before it can be counted, at least half of the pellets must be within the 4-foot radius, and the pellets must be on top of leaves. Depending on deer density in the area, many to most of your plots will contain no pellet groups. That’s okay. Just follow these instructions and don’t cheat by moving your plot center to include a pellet group that is “almost” in.

Once finished, using your compass to stay on line, walk another 100 feet along your transect and sample another plot with your stick. Record the data and continue sampling at 100-foot intervals until you reach the end of the transect. Walk to your next transect and continue the process. This technique is designed with transects being one-mile long. If your property is large enough to accommodate a one-mile transect, that’s great (and your property is much longer than mine). It’s fine if your property is less than one-mile long. Simply run your transects throughout the property separated by 1,000 feet between them, and then use the same transects annually. I personally use six transects that vary from 1,400 to 4,100 feet long.

If you can complete your survey in one day, that’s great. If not, don’t sweat it. I’ve conducted spring pellet counts on our farm for the past 10 years, and I typically do it over the course of two to three days. Once the field portion of your survey is complete, it’s time to crunch the numbers. For this you need to know the estimated number of days since the leaves fell last fall. Your local Cooperative Extension agent can typically give you the leaf-off date for your area. Leaf-off for me in north-central Pennsylvania has ranged from October 30 to November 11 during the past 10 years. However, it’s been November 1 or 2 for six of those 10 years. You also need an estimate of the number of times deer defecate per day. There is some debate on this, but Penn State University uses 25 pellet groups/deer/day as an average, so that’s what I use. Can you imagine hitting the can 25 times per day? Good thing deer don’t use TP or the woods would be littered with it! The last things you need are a calculator and the math formula. You get the calculator, and here is the formula:

Here’s an example from our farm in 2016. I surveyed a total 140 plots, I found 31 pellet groups, and I surveyed approximately 132 days after the leaves fell.

This estimates there were about 37 deer per square mile on our property. This is a high deer density, and it may or may not be accurate. The important thing is I’ve conducted this survey at approximately the same time each year using the same transects, so I’m able to see how the estimates have changed over time. Here is the actual data on our farm from 2007 to 2016. The trend over most years corresponds very closely with our summer camera-survey estimates, and this gives me great confidence when determining the number of antlerless deer we should shoot each fall. Are these estimates exactly right? No way, but they are a great index to what the true population is, and they allow me to make wise management decisions from them. 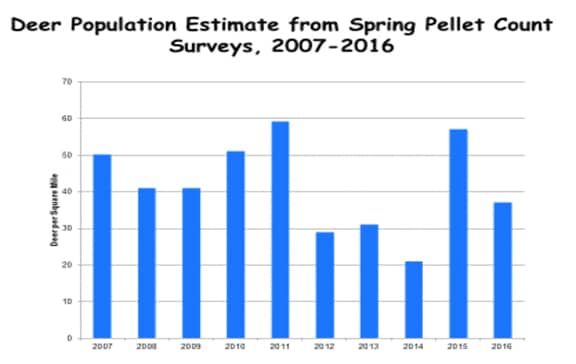 What’s up with the 2015 estimate? Do you think the deer herd nearly tripled from 2014 to 2015? Me neither, and that’s why using the trend in this data is what’s most valuable. We’ve been actively trying to grow the deer herd over the past few years by reducing our antlerless harvest, and the herd definitely responded in 2015 and 2016. I fully believe the number of deer using our farm increased from 2014 to 2015, but the huge growth suggested in the graph is at least partly a result of a great acorn crop on our farm in 2015. This is also why I don’t get too excited over a single year of data given the estimate in 2016 is more in line with the multi-year trend.

As I mentioned I use six transects and they cover three distinct portions of our property. Thus, I also calculate my results for each portion separately. This provides great insight into where deer were during hunting season, and I compare this to our camp’s hunting season observation surveys to determine if we were seeing deer at anywhere near the same rate as they were present on the property. It allows us to follow the impact of food sources and hunting pressure on the number of deer we see while hunting.

It’s time to lace up your boots and collect some data where you hunt. I just finished my 2016 survey and my hunting will be better this fall for the time I spent in the woods this spring. I encourage you to do the same. Good luck and good hunting this fall.