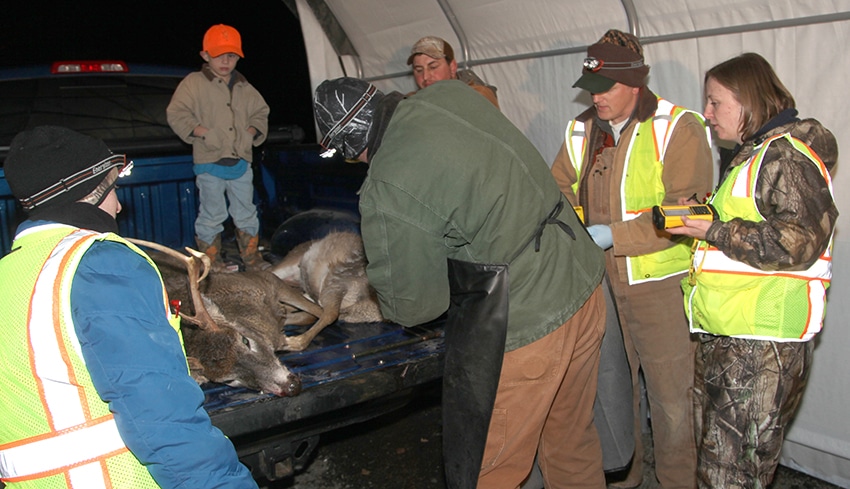 Last fall as deer hunters across the nation geared up for hunting season, many state agencies also prepared to collect harvest data from those successful hunters. The Missouri Department of Conservation (MDC) is one agency that has continued to monitor Chronic Wasting Disease in its state since it was first detected in free-ranging deer in 2012. One way that MDC tracks CWD in Missouri is through mandatory sampling stations in CWD Management Zones the first weekend of firearm season, and last fall NDA’s Deer Outreach Specialists, Karlin Gill & Cheyne Matzenbacher, assisted in Missouri’s sampling efforts.

Over the opening weekend of firearms season, almost 19,000 tissue samples were taken from around the state. Missouri deer hunters harvest about a third of the state’s total annual deer harvest in these first two days of deer season. By focusing on this key weekend, MDC has the best opportunity to collect the most tissue samples during a very concentrated period.

With so many deer hunters participating in CWD sampling, we thought it would be a great time to reflect and address some questions and misconceptions we heard while assisting at the check station. Maybe you have even had some of these questions yourself. Just like all good hunting camp stories, conversations shared over the love of hunting and deer are always exciting and can lead to more knowledge gained.

Chronic Wasting Disease (CWD) is an always fatal, contagious, neurological disease affecting deer species (including reindeer), elk and moose. It causes a characteristic spongy degeneration of the brain of infected animals, which after a long incubation period results in emaciation, abnormal behavior, loss of bodily functions and death. Importantly, with an average incubation period of 18-24 months, most deer with CWD die from another cause before symptoms are evident to hunters.

The theory with the most supporting evidence is that the CWD agent is a deformed or “misfolded” prion, an abnormal form of cellular protein that is most commonly found in the central nervous system and lymphoid tissue. The abnormal prion “infects” the host animal by promoting conversion of normal cellular prion protein to the abnormal form. As a protein, the CWD agent does not contain any genetic material (DNA or RNA) as occurs with bacterial, viral, fungal, and parasitic disease agents.

How much CWD is in Missouri?

Since 2012, 206 deer have tested positive in Missouri for CWD. You can keep up to date with the Missouri Department of Conservation CWD Surveillance System which logs past and current CWD sampling data. MDC has tested more than 152,300 deer since the first cases of CWD were found in free-ranging deer in Missouri.

Where did CWD come from?

The origin of CWD is unknown, and the truth is we will likely never know how or when CWD arose. It has been theorized, though never proven, that the sheep prion disease called scrapie may have jumped to deer sometime after its discovery in 1947. Somewhere along the front range of the Rocky Mountains, extensive sheep grazing occurred in this area in the early 1900s. It also may be possible that CWD spontaneously arose in deer in the wild or in captivity sometime in the last 100 years.

Can you tell a deer has CWD by looking at it?

No. Whitetails carry CWD for an average of one to two years before outward visible symptoms begin to appear. During this incubation period, they appear entirely healthy to a hunter, but they are capable of spreading the disease to other deer. Only in the final “clinical” stages of the disease will deer begin to appear emaciated, weak, or disoriented. So, the answer is no, you can’t look at a deer and tell whether it has CWD.

Do you have to remove the brain from the carcass to test for CWD?

The brain does not need to be removed from the deer carcass to sample for CWD. Chronic wasting disease sampling takes only a few minutes and consists of cutting an incision across the throat of harvested deer to remove lymph nodes for testing.

Do you have to put the lymph nodes into a solution for transportation?

The lymph nodes at the Missouri sampling stations are placed into secure sampling packets without any solution and then placed into a cooler for transport.

Can you tell by the nodes if the deer has CWD?

There are no visual signs on the lymph nodes that indicate CWD. Tissue samples from the nodes are sent to an independent lab where they will be tested.

Can I eat a deer if it has CWD? Should I wait to get the results back?

It is recommended that you do not eat the venison of a deer harvested in a CWD management zone until you receive results showing CWD was not detected. Though there is no evidence CWD has infected humans, experts recommend you avoid eating venison that is known to come from a CWD-positive animal.

Process and store venison harvested in a CWD zone until you receive results of testing. If CWD is detected in your deer, dispose of the frozen venison in a landfill or in a designated disposal site for venison in the CWD zone.

Why are you pulling incisor teeth? Do the teeth contain CWD?

Often at sampling stations state wildlife agencies take the opportunity to collect other harvest data that can help determine valuable information such as herd structure and health. At this particular sampling station where we worked, Department of Conservation staff were also taking harvest data that could help determine the age of the deer. One particular method was removing the front two incisors. These teeth will be sent to a lab and aged using a technique called cementum annuli. The cementum annuli technique uses a cross section of a primary incisor (two front teeth) of the deer to count the number of “rings.”

Pulling incisor teeth was not related to CWD sampling. Prions have been found throughout the body of infected deer but are particularly common in the brain, eyes, spinal cord, spleen, tonsils, and lymph nodes.

Are the older deer more susceptible to CWD?

Research indicates older bucks have a higher prevalence of the fatal brain disease.

Does that mean bucks are a larger threat than does?

No, even though adult bucks are about twice as likely as adult does to have CWD, most deer herds contain at least two adult does for each adult buck.  Thus, even though the prevalence rate is higher in bucks, there are likely always more adult does with CWD on the landscape than bucks.  That means we have to focus harvest pressure on does also to keep CWD from spreading.

Can I dispose of this deer carcass in my trash?

The answer to this question depends on where you harvested the deer and what your state agency regulations are. Follow your state’s guidelines for transportation and proper disposal of deer carcasses. Disease-causing prions can be spread to new areas in carcasses, so it is important to dispose of carcasses appropriately inside the CWD management zone. Many states supply disposal sites or methods.

Hopefully, addressing these common questions makes you feel more prepared to go afield this season with a greater understanding of CWD. Current CWD management practices are in place to fight against the disease until more effective solutions arise. We as conservationists should not lose hope but continue to assist in any way we can to protect our deer populations for generations of hunters to come!

Karli Gill is NDA's Deer Outreach Specialist in northern Missouri. A Missouri native and lifelong deer hunter, Karli comes to NDA from the Missouri Department of Conservation, where she served as the naturalist for the Runge Conservation Nature Center.