Crabapples for Deer: How to Pick a Winner 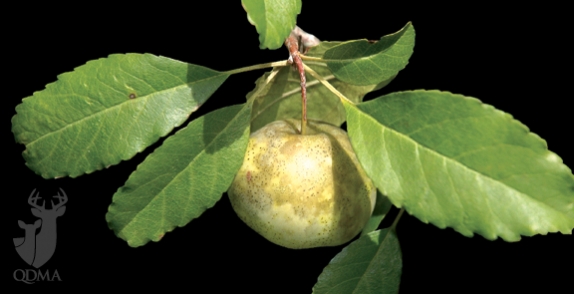 When I was asked to contribute an article to Quality Whitetails magazine about selecting crabapple varieties for use in deer orchards, I readily accepted the challenge. However, it didn’t take long to realize I’d opened a big can of worms.

Although it’s generally agreed that deer like to eat crabapples and these trees are good deer attractants, that’s where the consensus stops. People can’t agree on the definition of crabapple! Most think a crabapple is a small, bitter apple (Actually, some crabapples are sweet and some true apples are bitter). Other people use the name “crabapple” to refer to apple trees growing wild, not cultivated.

Getting to the Crabapple Core

Beginning in the late 1800s, plant breeders collected various small-fruited, wild-growing apples from around the world and selectively bred them for ornamental value and disease resistance without regard for fruit taste. Small and colorful fruits that persisted on the tree until dried were preferred over large fruits that dropped. The idea was to lengthen the period of colorful fruit display and reduce the amount of messy fruit litter for urban landscapes. Modern flowering crabapples represent a melting pot of world-wide apple genetics resulting in a wide range of tree forms (upright, spreading, weeping), and flowering and fruiting characteristics. Some of the flowering crabapples are more resistant to the major apple diseases – fireblight, apple scab, and cedar apple rust – than many full-sized apples and our native crabapples. However, many of these disease-resistant varieties have tiny fruits, or don’t drop their fruits, so they have little value as deer food.

As a general rule, crabapples need less pruning than larger apples, bloom over a longer period, produce up to twice as much pollen, and their blooms are very attractive to bees. These characteristics make them a great addition as a pollenizer in an apple orchard (apples are far more productive if cross-pollination by multiple varieties occurs, and crabapples can help in this role). Just make sure the bloom dates of the trees overlap to facilitate pollination and the crabapple’s flower color is similar to that of adjacent apples. Researchers have shown that honey bees selectively feed on apple flowers of the most predominant color in an orchard (whether white, pink or red), skipping trees having flowers of a different color.

Do deer prefer some crabapple trees over others? Yes! Some fruits fall to the ground and barely stop rolling before being sucked up by a deer, but others remain uneaten until other deer foods are depleted. Reasons for this preference are unclear. Deer might select the most nutritious fruits, or maybe it’s just a matter of taste. Or perhaps it’s a combination of both nutrition and taste. The bitterness of some fruits is caused by condensed tannins that evolved to discourage animals from eating fruit and spreading their seeds before the seeds matured. After seeds mature, many fruits lose their bitter taste because tannin levels drop and sugar levels rise – as well as nutritional value. Human taste perception and what deer taste may be different. However, deer certainly should have the ability to taste sweet, sour, bitter and salty because of the design and arrangement of their taste buds. When selecting crabapples for deer, it might be a good idea to include both sweet (eaten early) and bitter (eaten late) varieties.

Some crabapples are great selections for your deer orchards; others are a waste of money, space and time. The only way to pick the winners for your location is to approach the decision-making process systematically. In addition to fruit taste, also consider characteristics such as relative fruit size, when and if a tree drops its fruit, growing requirements, disease resistance and annual production patterns to make sure a particular variety matches your needs. If you live in the Northeast, it is important to select a variety that is cold hardy and resistant to apple scab. If you live in the Southeast, don’t buy a tree without resistance to fireblight. If you want food for deer, don’t buy a tree with fruit the size of peanuts that hang on the tree until dried. If you select a variety known for alternate-year production, expect that it will have little or no fruit the year after a bumper crop.

Of course, like full-sized apples, crabapples go dormant during winter and require a certain number of “chilling hours” to break dormancy in the spring and grow normally. Chilling hours describe the total amount of time during which air temperature is below 45°F but above 32°F. The chilling requirement for a particular variety is important, but this information is largely missing for crabapples. As a general rule, fruit trees grow best when planted near the location of their development. Many improved crabapple varieties were developed in Britain, the northern United States, and Canada. So, it seems reasonable that they should have high chilling requirements. However, because temperatures below 32°F and above 45°F do not count toward annual chilling accumulation, it is possible that locations in northern Minnesota, Canada, southern California, and central Florida might receive similar annual chilling.

Let’s review the questions you should ask when shopping crabapple varieties:

Use all the available information to choose multiple tree varieties that fit or come close to fitting all the attributes you are looking for. You will have to make some compromises. In a perfect world, we could select varieties that produce large fruit that drop at the right time, that are sweet, and that are resistant to all apple diseases and parasites. However, in the real world, you must make tree selections based on the best fit, even though each of the tree varieties might be somewhat less than perfect. Whenever possible, select multiple varieties to assemble a “team” of trees with diverse strengths and advantages. Plant them where you hunt, and monitor their performance. Buy and plant more of those varieties that perform well. For those that perform poorly, mark it up to experience and don’t plant that variety there again.

I know many deer hunters in the Southeast plant native southern crabapples – now considered a variety of sweet crabapple – as part of their habitat management program. Although inexpensive, production potential of these trees likely will be affected by cedar apple rust, fireblight, or scab. Although native crabapples are more susceptible to these diseases than some cultivated apples and crabapples, they likely will have some disease in bad years and little or no disease in good years. So, I encourage you to continue planting these seedlings, just plant them away from improved varieties of apple and pear trees to minimize disease transmission.

Do your homework before buying crabapples for your deer orchard. Ask the local nursery for details on each variety they sell. When information isn’t available, consult with other deer hunters in your area. What crabapples have they planted and how do they like them? By keeping a performance record for each variety in your orchard, selecting superior trees, and sharing information with others, you can help us to better understand performance of crabapples across the whitetail’s range.

About the Author: David Osborn is the wildlife research coordinator at the Deer Lab at the Warnell School of Forestry and Natural Resources at the University of Georgia.

View all Articles By David Osborn