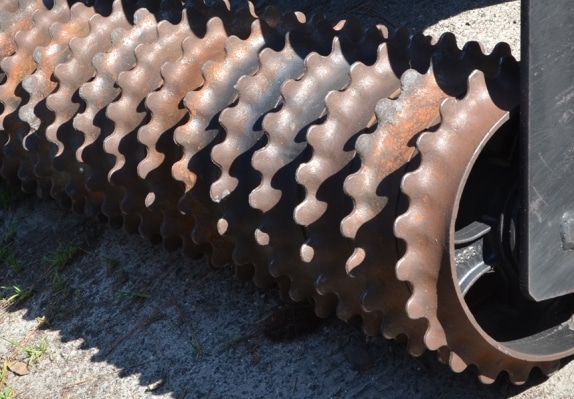 The basic equipment you must have to call yourself any kind of “food plotter” is a set of disk harrows, a machine that will pull it (whether an ATV or a tractor), and some type of seed spreader, even if it’s only a hand-held, hand-cranked spreader. With these, you can prepare the soil on a decent amount of ground, spread the seed, and grow food plots. Then there are the implements just outside these basic, minimal needs that aren’t absolutely necessary but would greatly advance your success if you had them. In my experience, one of these is a cultipacker.

What is a cultipacker, and why is it an important piece of food plot equipment?

A cultipacker is a heavy, iron roller, usually with iron cleats, that you roll over soil after it has been disked to firm and smooth the seedbed. The cleats help the cultipacker get traction and roll so that it firms the soil evenly. Cultipacking is especially important when you are planting small-seeded crops like clover, alfalfa, chicory, and brassicas, because it ensures consistent seed-to-soil contact across the entire food plot while minimizing the number of seeds that are planted too deeply. Small seeds like these do not contain enough energy to germinate and reach the surface if they are buried more than a quarter inch deep. Ideally, all they need is to be firmly pressed into the surface of the soil without being buried at all.

When you use disk harrows to cover small seeds after broadcasting, you are invariably going to bury many seeds too deep, even if you are trying real hard to “disk lightly.” Disk harrows just aren’t very good at “lightly.” Plus, soil that has been disked usually has a very irregular surface, with lots of clods, holes and crags – plenty of crevices for small seeds to fall into, where they will be covered too deeply when the clods are broken up by “light disking.”

Soil that is drier and looser won’t have as many clods after being disked, but it may be “fluffy,” which you can see if you leave deep boot prints in the surface of the soil. Roto-tilling can also result in fluffy seedbeds. If you broadcast small seeds onto a fluffy seedbed, then “lightly disk” or drag the field, again you run the risk of burying a good many seeds too deeply.

A cultipacker helps you avoid these problems. Pull the cultipacker over a food plot after disking to firm and smooth the seedbed before broadcasting small-seeded crops. Then, cultipack again after broadcasting. This way, the seed will be pressed into the surface of an already firm seedbed. Even if heavy rains follow, germination isn’t likely to be reduced by seeds being pushed too deeply into the surface, as can happen if you broadcast onto a rough or fluffy surface and then get hit by heavy rains.

Cultipackers are also valuable for large-seeded crops that you broadcast, like cereal grains (wheat, oats, rye), corn, soybeans, and lablab. With these crops, it’s less important to cultipack twice; Disk, broadcast, and then cultipack once. These larger seeds can tolerate being planted more deeply.

Can’t you just drag a section of chain-link fence behind your ATV and do the same thing?

You can, but the effect is not the same or as consistent, and you don’t get the downward pressure that is so important. I’ve seen many homemade drags that tended to push and pile soil as they were dragged, leaving no seed in some spots and too much seed in others. As Dr. Craig Harper of the University of Tennessee wrote in his book A Guide to Successful Wildlife Food Plots, the results with a cultipacker are “far superior to dragging a chain-link fence or some other crude object around the field.”

A cultipacker is, by definition, a heavy implement. Both tractor-sized and ATV models are available.

The heaviest of the ATV models are stand-alone cultipackers (one implement). We have one of these at QDMA Headquarters. It does the best job of smoothing and pressing the seedbed, but the drawback is that it is more cumbersome to attach/detach and load on a trailer because of its weight. A full-sized ATV with good towing power is needed to pull this implement, especially going up slopes.

There are also lighter cultipackers integrated into combination implements, like a disk/cultipacker combo. We also have one of these at QDMA Headquarters. The disk gangs and the cultipacker roller can be raised/lowered independently, so you can disk without cultipacking, cultipack without disking, or disk and cultipack at the same time. The whole implement is easier to attach/detach and handle because it’s lighter, but the lighter cultipacker also does not do quite as good a job of rolling out the high spots and leveling the seedbed as the heavier stand-alone cultipacker can.

You can also buy seeder/cultipacker combos. In the case of implements like the Plotmaster and Firminator, you can get disks, seeders and cultipackers all in one implement. The cultipacking performance I’ve seen with these implements has been very good.

If you can’t find a new or used cultipacker, it’s also possible to assemble your own. This has been discussed in the QDMA Forum and several users have shared their suggestions on how to build your own cultipacker.

Click on the photos in the Gallery below to see several types of cultipackers, and consider adding one of these valuable implements to your food-plot equipment lineup.