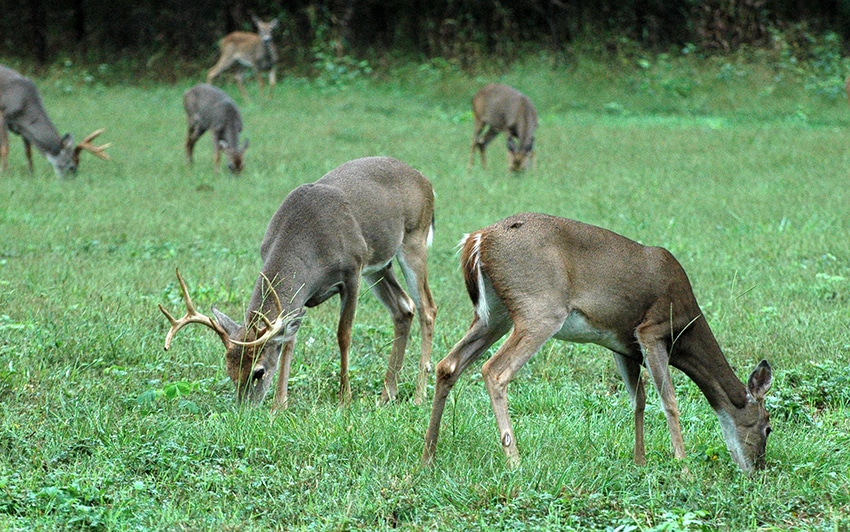 Here’s a fun and cool experiment in deer biology: the next time you sit down to a meal, first look around for any potential threats, like predators or fire or your loudmouthed Uncle Floyd who wants to join your hunting club. All safe? Next, bend your head down and press your nose to your biscuit, or backstrap, or whatever’s on your plate. Now, while touching your nose to your food, look around again for danger. See any? No, you don’t. All you can see is a big, blurry biscuit and maybe a little of Uncle Floyd’s Hawaiian shirt in your periphery. And now he’s got you cornered.

Deer do not have this problem. When their noses are in clover, or acorns, or browsing anything else at ground level, they can still see danger approaching almost as well as they can when their heads are raised. That’s because their eyes can do a trick called cyclovergence. Before you roll your eyes at this, let’s look at what we know about deer vision.

Deer have horizontally elongated pupils compared to our circular pupils. Among the animals of the world, horizontal pupils are found most commonly in prey species, according to a new study of animal vision at UC-Berkeley led by Marty Banks, Professor of Optometry and Vision Science. Marty explained that a deer’s horizontal pupils, combined with the fact their eyes are oriented to the side rather than forward, give them an incredible 300-degree panoramic view of their surroundings (our own field of view is slightly less than 180 degrees). See the comparison below.

This leaves a relatively narrow 60-degree blind spot in back of a deer’s head, which the deer can easily scan with a slight turn of its head left or right. Within this panoramic view, objects in a band along the horizon are in focus, while objects on the ground right in front of the deer or over its head are out of focus. It’s a very effective setup for detecting movement and potential predators in a deer’s surroundings.

But what happens when a deer lowers its head to take a bite of brassicas in your food plot or pick up a white oak acorn? The eyes rotate independently, in different directions, to maintain alignment with the horizon.

“If you imagine a line coming out of the center of the animal’s eye, the eye is spinning around that line,” Marty told me. “So when an animal pitches its head down, the left eye has to rotate clockwise, and the right eye has to rotate counterclockwise. We think we can see each eye rotating about 50 degrees. One is going 50 degrees and the other is going minus 50 degrees, so the difference is about 100 degrees. It’s a pretty remarkable ability.”

This is cyclovergence – the term for when eyes rotate in different directions. Human eyes do this occasionally, but only very slightly. A degree or two at most.

For deer, cyclovergence keeps the horizontal bands of vision in each eye aligned and level with each other, maintaining the deer’s panoramic view of its surroundings even while its head is tilted downward to feed at ground level.

The pupils of a deer’s eye are not easy to see because of their typically dark eye color. In the graphic below, we have enhanced the pupil to make it more visible.

Notice that even as a deer tilts its head downward to browse at ground level, the pupil remains horizontal.

The next time you are standing close to a horse, goat or cow, you can see their eyes do the same thing whenever they lower their heads to graze. As the domesticated descendants of prey animals, they also have horizontal pupils that remain horizontal when they feed.

So, deer are very good at detecting movement in surrounding cover, and that’s no less true when their noses are in food. Just because a deer drops its head to pick up that persimmon doesn’t mean it’s safe to draw your bow or scratch that itch. Don’t let them roll their eyes at you. Wait until you can’t see either one of the deer’s eyes, like when its head is behind a tree, to make your move.

Good luck putting this new intel to use this season, and also giving Uncle Floyd the slip!

To hear more about deer vision, along with a deep dive into their senses of hearing and smell, check out our Deer Season 365 Podcast episode with Dr. Gino D’Angelo.