As hunters, we think and talk and worry a lot about deer predators, but new evidence suggests the predators deer fear most are – us.

They should. In the 2020 season, human hunters killed 6.3 million whitetails in the United States. No four-legged predator, certainly not coyotes, comes close to being as big an actual threat to adult whitetails each year. It might be helpful to your hunting success if you start thinking of yourself as the most lethal deer predator in the woods, and you can start by shutting your mouth.

A new scientific study recently published in the international scientific journal Oecologia found that the sound of a conversational human voice struck greater fear in whitetails than other predator calls and sounds tested.

“I’m an avid bowhunter. As a biologist I largely focus on deer behavior, but a lot of that comes from me wanting to be a more efficient hunter,” said Dr. Daniel Crawford, the lead investigator who recently earned his Ph.D. at the Caesar Kleberg Wildlife Research Institute at Texas A&M-Kingsville with this study.

Previous studies suggest that coyotes can affect deer populations without ever touching them. Just by forcing deer to be more alert and evasive, coyotes reduce feeding time and opportunities. In high coyote densities, they may even reduce conceptions and thus fawn production. Daniel and his co-authors wanted to know if humans have the same effect. So they set up baited sites and trail-cameras linked to a digital playback system that randomly played audio samples.

The study was conducted in May and June 2018 at the Jones Center at Ichauway, a 30,000-acre ecological research site in Georgia, where Daniel works as a post-doctoral research associate. Here’s the basic setup of the study: 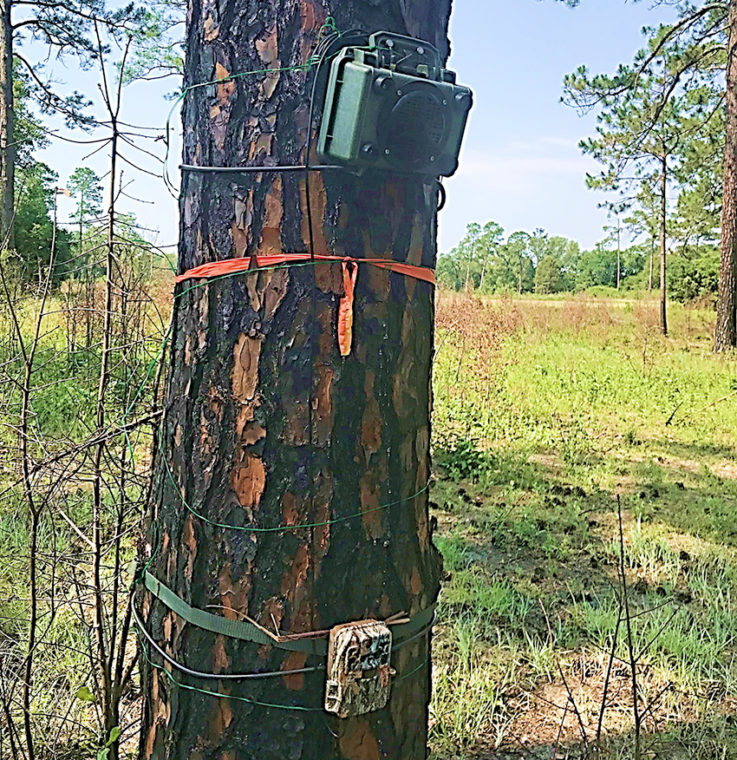 Each of 23 cameras used in the study was wired to a digital audio playback system. Every time a video was triggered, the system played a random sample from a playlist of 64 different sounds.

Are you wondering who provided the human voice samples, and what they said? So was I.

“I did my undergraduate and master’s work at the University of Georgia, so I’m a big Bulldog fan,” said Daniel. “I used an audio clip of an interview with Kirby Smart, Roquan Smith, and some other sports talk. My Canadian co-authors wanted to know what all this football was about, so I added in some hockey coverage for them, and to find out if deer are only scared of southern people because that’s who is shooting at them on the study site.”

Also, four of the eight human voice samples were men, four were women.

When the trial ended, Daniel had 823 videos to examine across the 23 sites, with a fairly balanced distribution of videos among the sound options: 159 bird, 128 coyote, 138 cougar, 126 dog, 123 wolf and 148 human sound interactions (be sure to watch the YouTube video at the top to see some of the clips from the study). He then sorted deer reactions. Did it flee or not upon hearing the audio? If it didn’t flee immediately, did it reduce feeding time by departing before the remainder of the 20-second video ended? He also had a protocol for analyzing the reactions of multiple deer in a single video, and he analyzed the time delay before any deer returned to a bait site following a trigger event.

Daniel found deer were significantly more likely to flee from sounds of coyotes, cougars, dogs and wolves than the non-threatening “control” samples of birds, as expected. But surprisingly, the most alarming sounds by far were human voices. Deer were almost twice as likely to flee from the sound of a human voice than any of the other large carnivores. Refer to the chart below.

Daniel said this makes sense considering the “lethality” of the various predators studied. The Jones Center is intensively managed with prescribed fire and other techniques that enhance deer habitat. To maintain balance on the 30,000-acre site, the annual harvest goal ranges from 300 to 400 deer – up to a deer per 75 acres. Humans are the most effective predator of deer on the study site, so it makes sense deer fear them most. And keep in mind, Daniel’s camera study took place in spring and early summer – four to five months after the close of deer season.

Wolves and cougars haven’t existed in appreciable numbers in Georgia in centuries. Coyotes are abundant, but Daniel said they are not as lethal as humans.

“We know coyotes kill some deer, but in South Georgia I don’t think coyotes are killing a very large number of adults,” said Daniel. “I don’t think there’s enough lethality there to incur the fear response you would expect of an efficient predator of adult deer.” 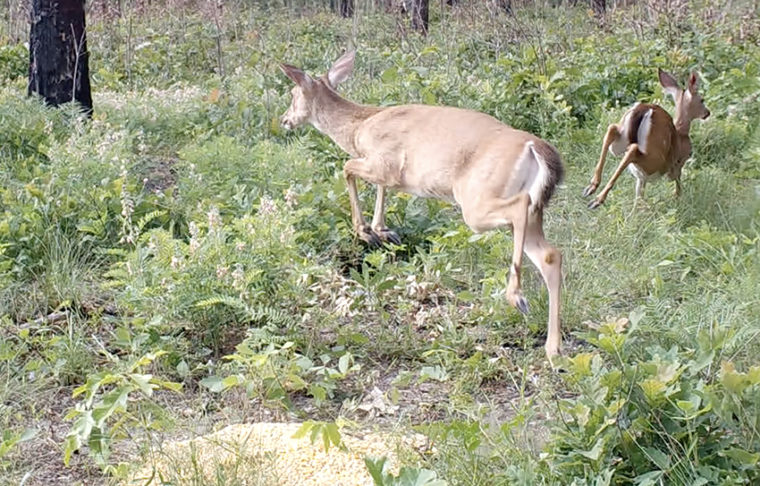 In this screen capture from one of Daniel’s videos, two deer flee at the sound of a wolf howl. To watch 17 different video clips from the study, see NDA’s YouTube video included with this article.

Daniel also mentioned coyote abundance and how he often hears three to five packs howling every night when he’s out doing research work. “Deer can’t really afford to be hyper-reactive to coyotes,” he said. “If they were, they would never eat. They’re surrounded by them all the time at this site.”

The real surprise to Daniel was the reaction to wolves, which deer feared the most of any of the predators except humans.

“I was shocked about the wolves given they’re long gone,” he said. “At first it was kind of a head-scratcher, but it makes a lot of sense: Deer co-evolved with wolves. In eastern North America deer have existed with wolves far longer, and coyotes are relative newcomers. And again there’s lethality.”

Humans can also be said to be “newcomers” to North America relative to wolves. We’ve been here thousands of years, not millions like wolves and whitetails. But on the study site today, humans are more lethal to deer than any predator they encounter.

“Our results are context-dependent for sure,” said Daniel. “We are in an area where there’s a heavy emphasis on deer harvest, and there are a lot of deer killed every year by people. In hunted places, I expect deer are going to behave like this.”

What does this mean to you and your hunting strategy? The first lesson is, shut the hell up.

Whether it’s low-talking while answering a phone call in the deer stand, or wishing “good luck” to a hunting partner as you split for different stands, you might as well give a wolf yelp. The sounds of multiple human voices, like when you and friends are blood-trailing a deer after a successful hunt, might affect deer activity in that spot long after you go home.

But the lesson goes beyond your big mouth. In hunted areas, deer consider you Enemy Number One. The sight and smell of you are likely just as alarming as your sounds, whether you are hunting or not. Science has shown coyotes can affect deer nutrition simply by reducing time spent eating – and this study suggests you probably have an even greater effect than coyotes. Planting food plots, checking trail-cameras, riding ATVs, hunting sheds, or taking a walk in the woods for exercise – the more of this activity where you hunt, the greater the stress on deer health, and the more difficult you make it on yourself to successfully hunt these hyper-wary deer. We can’t cease these activities altogether, but we can minimize them, especially as hunting season approaches and while it lasts.

So stop blaming coyotes for those nervous deer that won’t walk out in your food plot in daylight or stand still and calm while you make a perfect bow shot. And when they’re constantly checking the wind or blowing and stomping at every twig-snap? They’re on alert for the most dangerous predator in the woods: You. Start acting like a lethal predator and shut your venison hole already.