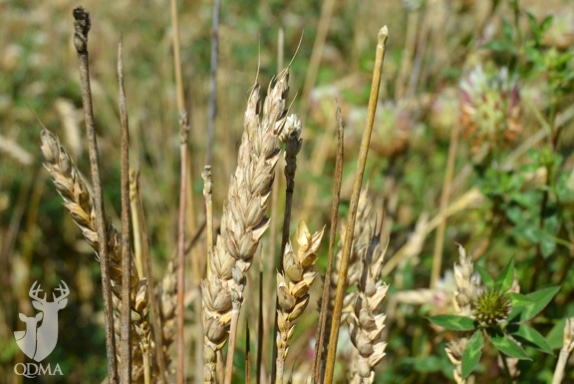 Winter wheat is an excellent cool-season forage for white-tailed deer. Healthy, green, growing wheat contains more than 20 percent crude protein, and with less than 25 percent acid detergent fiber it is highly digestible. Forage yield is commonly 4,000 to 6,000 lbs./acre from October through March, and wheat is a relatively high-preference forage of white-tailed deer. In cafeteria-style plot tests, wheat is consistently eaten by deer from the time it is planted in late summer/early fall through winter, regardless of what other forages are available. Wheat is cold-hardy, grows in a wide range of soil types, and is tolerant of relatively dry conditions. It’s easy to plant. The germination rate is high – almost never below 80 percent – and seedling vigor is strong, all of which help make wheat the closest thing to a fail-safe high-quality planting there is.

All of this, however, still does not explain all the benefits of wheat. There is another attribute of wheat that is underappreciated, overlooked, and not well understood by many deer managers – wheat seedheads.

Wheat seedheads – which appear in spring and summer when fall-planted wheat matures – are a great source of energy, not only for white-tailed deer, but also for a host of game and non-game wildlife species. Depending on variety, wheat seedheads rarely hit the ground. They are eaten on top of the stalk, beginning in the milk stage through mid-summer as long as they last. And for good reason. The energy and carbohydrate content of wheat seed, by weight, is comparable to that of corn and grain sorghum, and crude protein of wheat seedheads exceeds 12 percent, which is important in early summer when wheat matures as antlers are growing, does are lactating, and young turkeys and other birds are molting and growing. In the photo at the top of this article, you can see wheat seedheads in various stages of being consumed by deer. 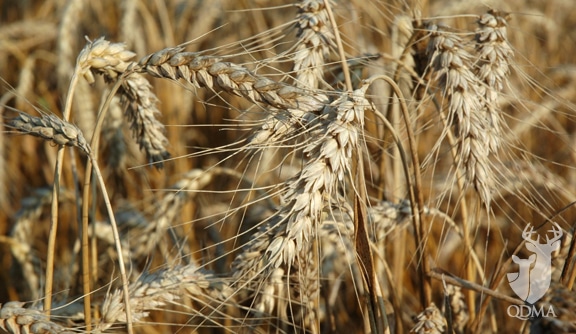 However, not all wheat seedheads are made equal. Most varieties of wheat produce awned seedheads. Awns are those long, stiff, hair-like structures present on seedheads of some wheat varieties, as well as cereal rye and triticale (you can see the awns clearly in the photo just above). Other wheat varieties do not have awns, like the wheat in the photo at the top of this article. They are called “awnless” varieties. This distinction is important because it dictates preference of wheat seedheads by deer and other wildlife. Awnless wheat seedheads are much preferred over awned varieties. Data collected by Ryan Blair, University of Tennessee Extension Area Grains and Cotton Specialist, and other UT personnel in west Tennessee show this clearly.

In these studies, grain production of 24 wheat varieties was evaluated across nine sites in west Tennessee. Five of the varieties were awnless: 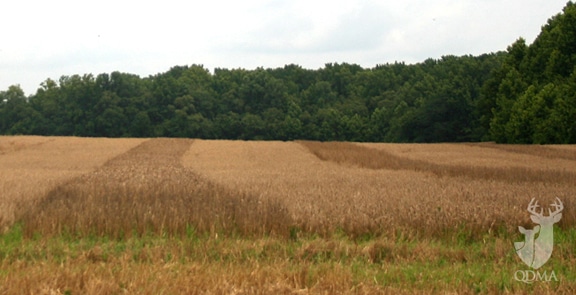 Winter wheat can be planted with a variety of other forages, in both annual and perennial forage plots. I commonly add wheat to my perennial forage mixtures because not only is the wheat eaten, but it also provides a nurse crop for the perennial forages as they establish.

One of my favorite annual mixtures includes awnless wheat. In my opinion, there is no better annual mixture for white-tailed deer or wild turkeys. I will share the mixture with NDA members in an upcoming issue of Quality Whitetails magazine, so if you’re a member, look for it soon. If you’re not a member, join today so you’ll get all the membership benefits.

Regardless, considering ease of planting, management, and nutritional benefit for multiple wildlife species, it is difficult to beat a simple planting of winter wheat, especially if you plant an awnless variety.

Editor’s Note: This is an excerpt from a longer article to be published in Quality Whitetails magazine. To start receiving much more information about food plots, deer habitat, Quality Deer Management techniques, and deer hunting, become an NDA member today.

Dr. Craig Harper is a Professor of Wildlife Management and the Extension Wildlife Specialist at the University of Tennessee. Craig is a regular contributor to Quality Whitetails and a Life Member of the QDMA. Dr. Harper and his graduate students concentrate their work on applied management issues, including forest management, early succession management, food plot applications, and the effects of quality deer management.