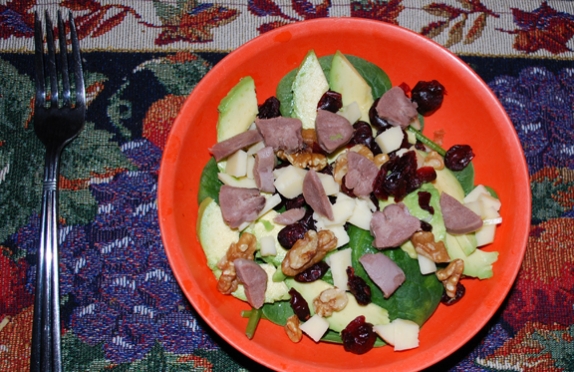 About a dozen years ago, I began to feel guilty about leaving gut piles behind in the woods after field dressing a whitetail. I was uncomfortable knowing my wife Elaine and I might be wasting edible items after butchering an animal. We first tried cooking the heart, which we found to be delicious. Then we tried liver, which smelled great when it was being cooked, but the taste was, well, not very appealing.

Our next experiment involved the tongue – rather I should say “my” experiment, as Elaine just couldn’t bring herself to try this organ. My reasoning was that in the 1800s, Americans regarded buffalo tongue as a delicacy, and it became a high dollar entrée in the country’s best restaurants. So, why wouldn’t a deer’s tongue prove to be equally scrumptious?

Several years ago, I crock-potted my first deer tongue and found it to be tough and unappetizing – thus ending the research on that potential menu item. But this past year, while reading about cooking animal organs, I discovered that mammal tongues are covered by a sheath that must be peeled off, which I had not done on my initial kitchen test.

Intrigued about trying tongue again, I again crock-potted this organ, removed the sheath, sliced it into small pieces, and ate it on brown bread with sharp cheddar cheese and mustard – the same way I prefer heart. The tongue was quite tasty, possessing a milder flavor than heart but nevertheless very appealing and featuring a somewhat light, delicate taste.

Experimenting again, I found that deer tongue, as the prime player, makes an excellent salad. I’ve included a recipe below.

First, for those deer hunters who like to experiment with the organs and various uncommon cuts of a whitetail, I have a few questions. If you can help, please comment below.

Ribs: Have you ever cooked venison ribs? How do you remove the ribs from the deer, and how do you prepare them?

Lungs: I’ve heard that deer lungs can be made as part of a haggis recipe. Has anyone tried this?

Bone marrow: Native Americans ate deer bone marrow. Does anyone still do that?

Intestines: Many folks relish chitlins, which are fried hog intestines. Anyone ever tried doing that with a deer’s intestines?

Mystery Meat: Once, a widow who let me hunt on her land asked me to bring her a deer liver if I was successful, so I did.  Later, she called to thank me for including the gall bladder because it also “cooked up nicely” as part of her meal of fried liver and onions. The problem is, deer don’t possess gall bladders. To this day I wonder, what was the organ this lady ate?

Thanks for any ideas you can offer, and here’s that recipe.

In a crock pot, cook the tongue on high for three hours. I’ve removed the sheath immediately after cooking and also after refrigeration. I’ve found it works better to cook and then chill the tongue before removing the sheath.

On top of a bed of spinach, thinly slice the chilled tongue and add sharp cheddar cheese, black walnuts, cranberries, and slices of avocado – my favorite add-ons. Feel free to experiment with your favorite vegetables and cheeses, and let me know the results.

View all Articles By Bruce Ingram

Most of my non-hunting friends and family are extremely supportive of hunting but have been hesitant to try venison for a variety of reasons. Whether it is due to their misconceptions from popular culture or social…