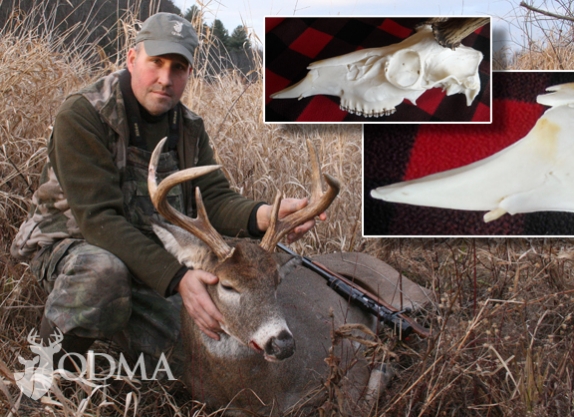 Last December, Brad Wiley – QDMA committee member with the Upper Hudson River Valley Branch in New York – killed a big 4 1/2-year-old buck on the Otter Creek QDM Cooperative, of which he is a member. In this case, however, it wasn’t the age or the size of the antlers that made the buck such a unique trophy. It was the two upper canine teeth that Brad discovered on the deer’s skull.

Lower canines are present in all normal whitetails, but upper ones are rare. Of the eight front teeth on a whitetail’s lower jaw, six are incisors and the outermost two are canines. These canines have simply moved forward through evolutionary adaption to look and function like incisors. Deer feed with these front teeth by pinching a leaf or bud against their upper palate and tearing it away from the plant.

Upper canines, however, are less common. In the Winter 2002 issue, Quality Whitetails answered a question from Steve Shifflett of Michigan regarding upper canines in whitetail bucks. In a nutshell, QDMA’s CEO Brian Murphy explained that, “Upper canines are a rare but documented phenomenon in whitetails, and that researchers believe it is an evolutionary throwback to the ancestral form of the whitetail which occasionally surfaces today.” Brian said, “While the exact prevalence of upper canines in whitetails is not known, it is believed to be well below 1 percent.”

Jim Heffelfinger, wildlife science coordinator with the Arizona Game and Fish Department and adjunct professor at the University of Arizona-Tucson reported in his book, Deer of the Southwest, that upper canines have been found in white-tailed and mule deer throughout their geographic ranges, and when present, these canines are generally small, peg-like teeth that may or may not break through the gumline. A 1963 report by Lawrence Ryel from the Michigan Department of Conservation (precursor to the Department of Natural Resources) states upper canines have been identified in whitetails from Central America to Saskatchewan. Lawrence cited reports of upper canines in 25 of 18,000 deer (0.14 percent) examined by the New York State Department of Environmental Conservation, in zero of about 10,000 deer examined by the Wisconsin Conservation Department (precursor to the Department of Natural Resources), in 4 of 166 deer (2.4 percent) from Michigan’s Upper Peninsula, in 1 of 134 deer (0.07 percent) from Michigan’s Lower Peninsula, and in 4 of 95 deer (4.2 percent) from Florida. The sex was not reported for most of these deer but at least one from Florida was female. Lawrence’s report also mentioned the frequency of upper canines appeared to increase from North to South as these teeth are more prevalent in Central American whitetails. 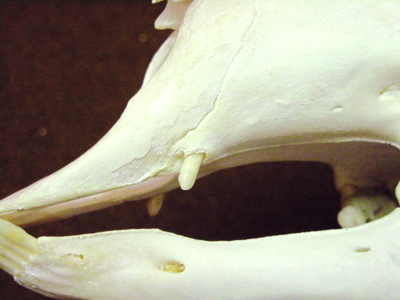 At whatever rate they actually occur, it is rare enough that the topic isn’t even mentioned in the section on whitetail teeth in the Wildlife Management Institute’s book,White-tailed Deer Ecology and Management. This 870-page book was published in 1984 and had traditionally been viewed as the authority for white-tailed deer information and references. However, the authors did refer to upper canines in ancestral deer and in some modern deer cousins. Chinese water deer, elk, muntjacs (males only), musk deer, Peré David’s deer, sambar and tufted deer are all modern relatives of whitetails with upper canines.  The current authority for white-tailed deer information and references is Biology and Management of White-tailed Deer, edited by Dr. David Hewitt.  This book does a great job explaining and showing the evolutionary progression from upper canines to antlers.

More hunters and managers are collecting jawbones than ever before as part of Quality Deer Management programs, but upper canines can easily be missed even when pulling lower jaws for aging. Taxidermists arguably see more upper canines than hunters and biologists combined. The first upper canines I saw were on a buck being mounted at the Pennsylvania Institute of Taxidermy in Ebensburg, Pennsylvania. I had heard about them and had operated deer check stations for the Florida Game & Fish Commission and New Hampshire Fish & Game Department for six years but had never seen them. In fact, I have skinned or aged hundreds of deer since that day and have only seen a few skulls with upper canines. This anecdotal information at least provides a sense of how infrequently these teeth occur.

So, if you come across a doe or buck with upper canines, add the skull to your collection of antlers and other memorabilia – you’ve got a rare find.