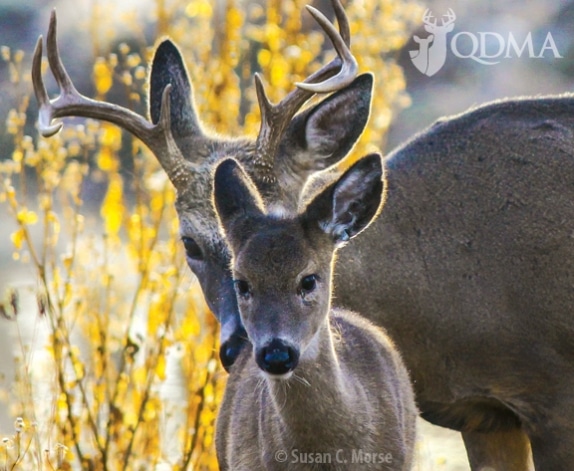 Some doe fawns breed and conceive in their first fall, at around six to eight months of age. The percentage that do this is determined by nutrition – they attain sexual maturity if they reach a specific weight threshold. In general, southern fawns reach it at approximately 70 pounds and northern fawns at approximately 80 pounds live weight. Fawns that manage to hit this threshold in their first fall tend to do so late, in December or January, and they are one reason for an apparent “second” rut in many areas.

Since the percentage of doe fawns that breed is based on weight, not necessarily age, it is a good indicator of herd health, and you can monitor this index by checking the lactation status of any yearling does that are harvested. If you kill a doe this fall that is 1½ years old by the jawbone and has milk in its udder, it was bred as a fawn.

Nationwide, an estimated 26 percent of doe fawns bred in 1998, and that average dropped slightly to 23 percent in 2008. However, since this index is so closely tied to a region’s habitat quality, it is difficult to lump the breeding rates across a region or even a state together. For example, in Pennsylvania an average of 25 percent of the doe fawns bred in 2008, but that percentage varied from 0 to 38 percent across the state’s wildlife management units (WMUs). Similar ranges occurred in Alabama (0 to 33 percent), New Hampshire (0 to 25 percent), South Dakota (0 to 58 percent), and Virginia (3 to 49 percent). These rates likely varied even more across specific properties within any WMU. This is one reason why collecting data from your location and using that to make site-specific harvest recommendations can benefit your Quality Deer Management program. Also, you can compare your data to WMU or state averages and assess how your QDM program measures up, and whether you have realistic expectations for what you can accomplish.

QDMA is the only conservation organization that monitors whitetail populations and herd health. Help us do more to track, encourage and protect whitetails: please become a QDMA member today. Your support is needed and appreciated!