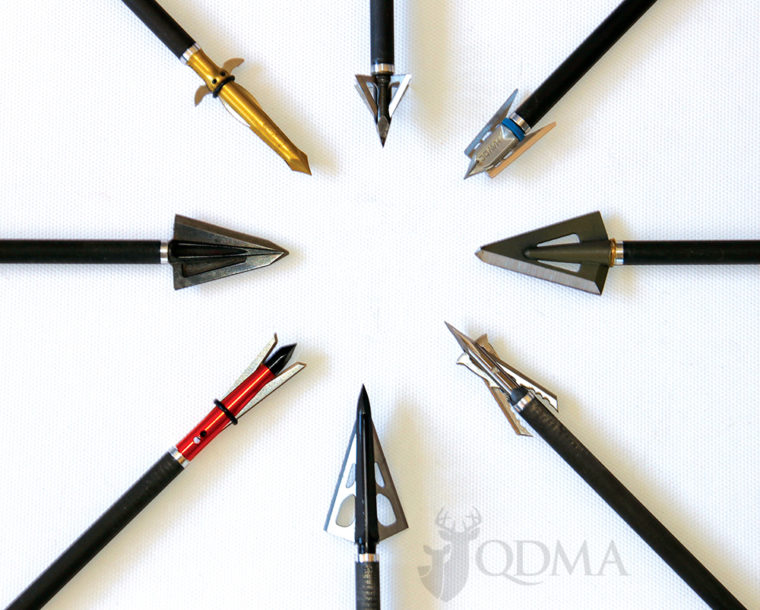 For the past 30 years, I’ve helped bowhunters track white-tailed deer on the Naval Support Facility Indian Head, a military installation on the Potomac River just south of Washington, D.C., and in the surrounding southern Maryland counties. After the Natural Resources Office (NRO) on the Navy Base allowed bowhunters to use mechanical broadheads for the first time in 2007, I developed a dislike for mechanicals. I was getting tracking calls that involved poor penetration and unrecovered deer. In 2013, I decided it was time to use the deer recovery data from the Navy Base’s bowhunting program to prove mechanicals were a bad idea for bowhunting. I published A Comparative Study on the Effectiveness of Fixed-blade and Mechanical Broadheads in 2014, and the data revealed that mechanicals were not only just as good as fixed-blades, they were even better.

Fast forward to 2019, and six more years of recovery data have verified the original findings. This article, first published in Quality Whitetails magazine, outlines and updates the efforts undertaken to determine the indeterminable in the fixed-blade vs. mechanical broadhead debate.

Internet discussions on the merits and limitations of fixed-blade and mechanical broadheads are largely based on personal experiences and opinions. One common theme in these discussions is that accuracy is paramount. If a bowhunter hits a deer in the heart/lung area, the choice of broadhead likely doesn’t matter, and deer recovery is almost certain. But the deer recovery rates of bowhunters are not 100%. After all, the adrenaline rush of having a deer in close range may ruin one’s shooting form or deer may “jump the string” – react to the sound of the arrow or its release before the arrow arrives – just a few of many reasons why bowhunters may not hit a deer where they had intended. Given a less-than-ideal shot placement, other matters come into play such as how long to wait before tracking, and did the arrow get full penetration. With so many variables affecting deer recovery, how can you resolve broadhead tradeoffs for accuracy, cutting diameter, penetration and reliability with scientific objectivity?

Many people have characterized relative broadhead performance by shooting at materials like plywood and ballistic gel. While these tests are hopefully meaningful in some aspect to killing deer, they do not address a critical issue: Did you find your deer? Surveying bowhunters as to how many deer they did and did not recover has its limitations, for it is a well-known human trait to deny shameful behavior. The bowhunting program on the Indian Head Navy Base documented hunter success and failure, so I did not have to rely on selective memories. The rock-solid database includes details on over 40,000 hours of bowhunting effort gathered over a span of 30 hunting seasons.

The Indian Head Navy Base is an explosives manufacturing and testing facility about 30 miles south of Washington D.C. Its 3,000 acres are also home to a whitetail herd that was once estimated at 200 deer per square mile in the 1980s. The Navy Base used sharpshooters intermittently to reduce the deer population back then. Bowhunting was proposed as a controversial alternative to sharpshooters. I was one of several hunters who helped set-up the bowhunting program. Safety was a primary issue – how could we quickly locate and account for all hunters if there was a Base emergency? Also, how could we document and prove the bowhunting program would operate without “excessive” wounding losses?

In 1989, the Navy Base approved a structured bowhunting program that required monitoring and documenting all hunter effort. All bowhunters (individuals affiliated with the Base, as there is no public access) first had to pass a State-approved Bowhunter Education Class and an annual pre-season shooting qualification test with broadheads. Mechanical broadheads were not allowed at the time due to concerns with wounding losses. Bowhunters signed in to hunt specific sites and had to sign out by one hour after sunset. Bowhunters notified the “Hunt Captain” – a trusted agent of the NRO – if they hit a deer. The Hunt Captain assisted with any tracking that went outside the assigned hunting area or after hours. All recovered deer were taken to a check station where the Hunt Captain recorded live/dressed weight and other biological data in a Harvest Log. Each hunter submitted a daily data sheet to the NRO that included equipment used and whether deer were recovered. Shot distances were added to the data sheet in 2007. 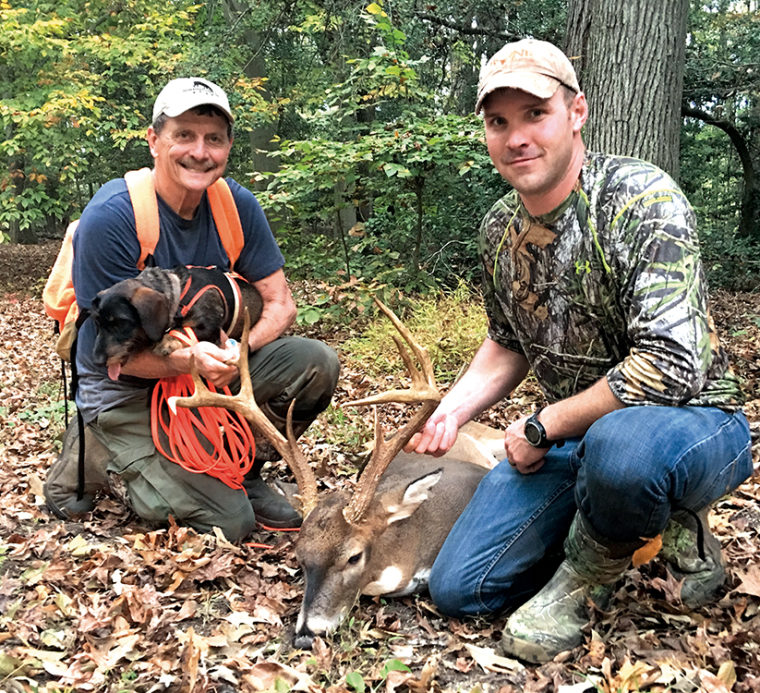 Nate Warren, who is on active duty with the U.S. Navy at the Naval Support Facility Indian Head, Maryland, killed this buck on base, one of 1,320 recovered deer in the featured study. Left: Study author Andy Pedersen and Ruby, Andy’s blood-tracking dog who helped locate Nate’s buck.

Hunting on the Indian Head Navy Base could be characterized as “low pressure” – an average of six bowhunters participate on any given day. For the 1989 through the 2018 seasons, 181 bowhunters recovered 1,320 of 1,560 hit deer (84.6%). Compiled hunter data sheets provided the bow type (compound bow or crossbow) and the broadhead type (fixed-blade or mechanical) that were used for each hit deer. 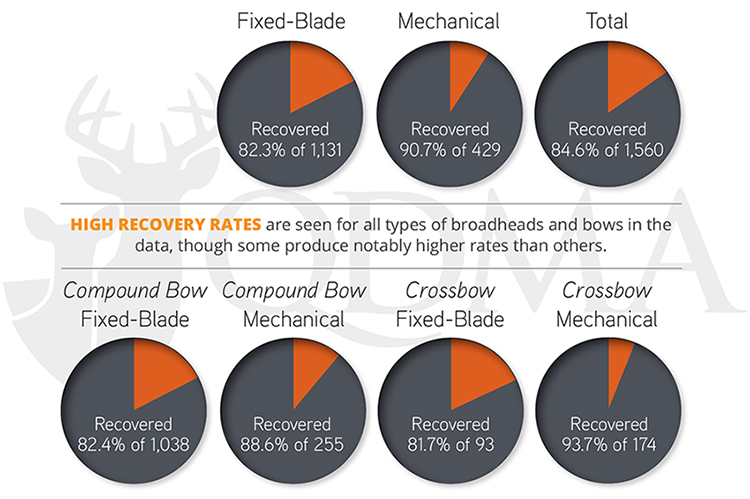 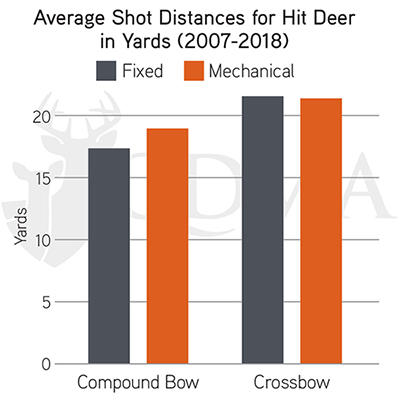 The considerable number of archery-hit deer in the database helped average out the effects of uncontrolled variables such as hunter skill, shot angle and tracking effort. It is difficult to imagine how any of these factors could have favored deer recovery for one broadhead type or the other. Therefore, I conclude that broadhead choice really does matter. However, like many others I feel that accuracy with a bow requires confidence in your equipment. If a bowhunter uses a compound bow and has had satisfying success with fixed-blade broadheads, then they should probably stay with fixed-blades. If a compound bow user wants to experiment with mechanicals, then they shouldn’t worry about oft-expressed concerns with reliability or penetration. These concerns are apparently not significant enough to have an adverse effect on deer recovery – on average! However, the benefit of mechanicals to crossbow users is rather substantial. I recommend that bowhunters with crossbows consider using mechanical broadheads.

Editor’s Note: NDA learned of Andy’s study when he first shared it with the public in 2014, and we published an article about the study. A common question for Andy at the time: How does he know hunters aren’t declining to report deer they hit and failed to recover? For several reasons, Andy believes this probably never happens. First, permission to hunt this base is highly exclusive and desirable, and you can lose it if you don’t follow the rules. Also, because of base safety and security requirements, hunters are not allowed to track deer outside their designated stand sites without notifying the Hunt Captain. Finally, hunters almost always ask for help with blood-trailing because recovery is so important. If it’s a doe, you want the credit for earn-a-buck rules. If it’s a buck, it’s a nice one due to base antler requirements. Given the rules, the incentives, and the close nature of the base and hunting communities, Andy said it would be very difficult to hit and lose a deer on base without anyone else knowing it.

Andy Pedersen of Nanjemoy, Maryland is an NDA member who retired as a senior engineer from the Naval Support Facility Indian Head. Andy helped establish the Base’s bowhunting program for managing the deer population. Andy is also a member of United Blood Trackers, which promotes conservation through recovery of big game with trained tracking dogs.

View all Articles By Andy Pedersen