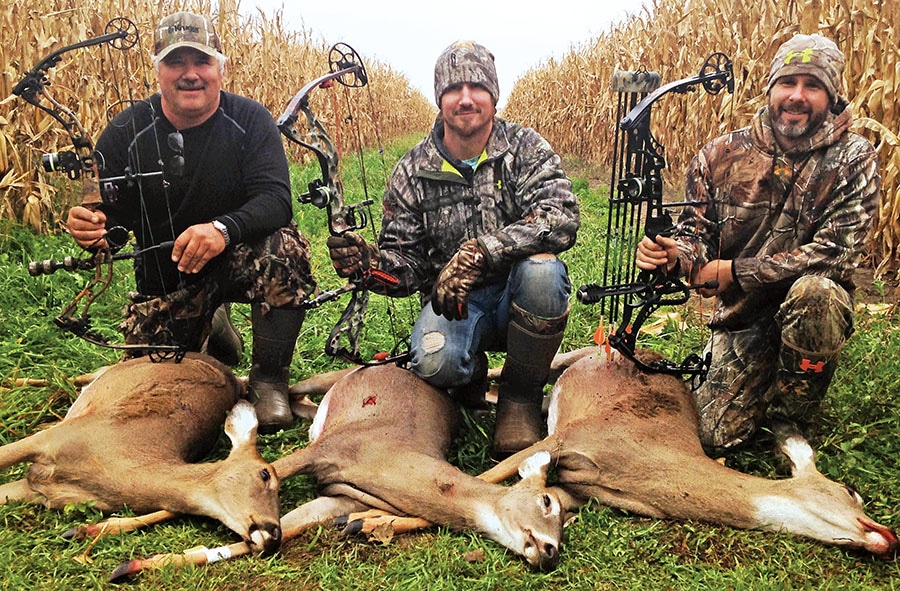 The year was 1999. We were on the cusp of a new century. The Yankees won the World Series for the 25th time. The Denver Broncos won the Super Bowl for the second time, and more importantly from a deer management perspective, hunters shot more antlerless deer than antlered bucks for the first time. That was definitely cause to follow Prince’s advice and “party like it’s 1999.” That was a landmark year in the history of deer management. Decades of legal and cultural protection of antlerless deer produced harvests dominated by antlered bucks. This strategy worked well during the early and mid-1900s as sportsmen and managers worked to restock decimated deer herds. However, it was counterproductive to healthy herds and healthy habitats once deer herds recovered.

In 1999 the QDMA was 11 years old. For just over a decade, QDMA founder Joe Hamilton and other early Quality Deer Management (QDM) pioneers taught hunters the benefit and need of increasing the antlerless harvest, and in 1999 deer hunters changed the tide of deer hunting history (see the chart on the facing page). The white-tailed deer harvest in the chart is from the 37 states east of the Rocky Mountains in the Midwest, Northeast and Southeast. These states are home to 97 percent of the whitetails and 97 percent of the hunters in the U.S., and they provide an accurate account of whitetail harvests in the U.S. from 1989 to the present.

From 2003 to 2016, the antlered buck harvest remained nearly identical (2,820,586 vs. 2,818,571 bucks), while the antlerless harvest declined 24 percent (3,701,814 vs. 2,830,264 antlerless deer). This is a difference of 870,842 antlerless deer and over 174 million venison meals! This is a huge deal for hunters, deer managers, herds and habitats everywhere. It also places an even larger reliance on American agriculture to feed society. The protein from those 174 million venison meals needs to be replaced with increased beef, pork, poultry or soybean production, and the additional acreage needed for this often results in habitat loss for deer and other wildlife species. 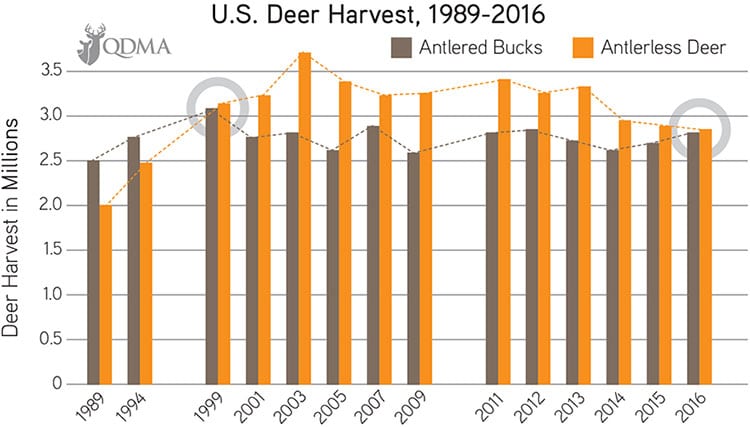 What’s causing this change in antlerless harvest? Several factors own a piece of the blame. There are fewer deer today than a decade ago. Many states have purposely reduced deer herds through expanded antlerless opportunities and bag limits, so the extreme antlerless harvests of the early 2000s aren’t as necessary today.

Fawn recruitment rates plummeted from an average of 0.81 fawns per doe in 2000 to 0.58 fawns per doe in 2015. That means it takes nearly two does to recruit one fawn today. Fawn recruitment rates are impacted by predator numbers, habitat quality, herd management programs, and other factors. We could debate which factor is most important, but the reality is there are significantly fewer fawns recruited today than a decade or two ago, so deer herds don’t need to be harvested as aggressively to keep them in balance with what the habitat can support.

We’ve also had two “100-year” hemorrhagic disease (HD) outbreaks in the past 11 years: 2007 and 2012 went down as two of the worst HD years in history, and impacts were noticeable to deer herds in several states. Other factors such as severe winters, droughts, and habitat loss are at play too, but one last significant factor is hunter willingness to shoot antlerless deer.

There’s been an increasing trend over the past few years of hunters in numerous states shooting more antlered bucks than antlerless deer annually. This is expected in places like New England, but not in our productive “heartland.” In the 2016-17 deer season, over half (six of 11) of the states in the Southeast shot more bucks than antlerless deer. This should not be happening in deer-rich Louisiana, South Carolina or Tennessee. Even worse, in the Midwest eight of 13 states shot as many or more bucks as antlerless deer. States like Kansas, Kentucky, Michigan, Nebraska and Wisconsin should be shooting far more antlerless deer than bucks, but that’s not the case today. In 2016-17, hunters in Michigan, Minnesota and South Dakota shot three bucks for every two antlerless deer. This has to stop. I’m fully aware there are areas today with deer herds below what the habitat can support, but there are numerous places with states urging hunters to shoot more antlerless deer that we’re not taking advantage of and pulling the trigger. In the 2016-17 season, 21 of 37 states (57 percent) shot more bucks than antlerless deer, and we need to reverse this trend. See QDMA’s 2018 Whitetail Report for state-by-state listings, now available for free download at QDMA.com.

It is entirely possible that when state wildlife agencies finish crunching the numbers from the 2017-18 deer season, we will have harvested more bucks than antlerless deer for the first time since the 1990s. I sincerely hope this is not the case, as that’s not a positive trend for the future of our beloved sport.

Donate a doe to the needy
QDMA’s new five-year goals include donating 35 million venison meals or the equivalent processing costs to charitable feeding efforts. If the deer herd in your area exceeds the density that can be supported in healthy condition by the habitat, please help us reach these goals by taking an extra antlerless deer this fall and donating to a venison drive or charitable organization. 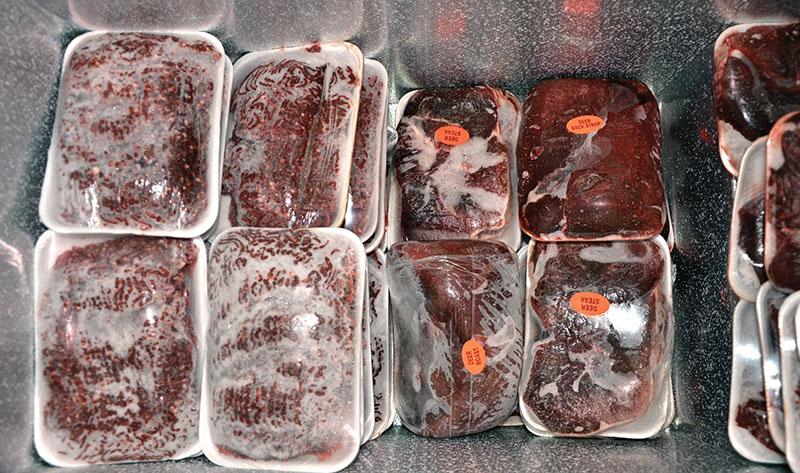