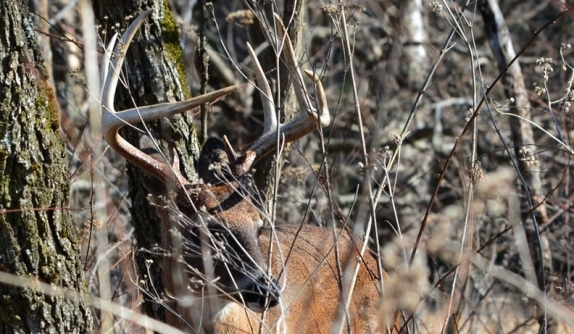 It’s simple: Deer respond negatively to hunting pressure. Their avoidance of heavily hunted areas is undeniable, as my graduate-level research at Auburn University documented. But exactly how long does it take for a specific stand site to “recover” from a hunter’s presence?

We now have an idea.

In my study using GPS collars, I tracked the movements and home ranges of 37 bucks at Brosnan Forest, a 6,400-acre study site in the Lowcountry of South Carolina. My study focused on buck movements in relation to breeding strategies and hunting pressure, and what you are reading is a short excerpt from a feature article on my findings about hunting pressure for the October/November 2014 issue of NDA’s Quality Whitetails magazine (If you’d like to start reading Quality Whitetails, become an NDA member today). The GPS collars were distributed evenly across age classes, with roughly equal numbers of bucks in each of four age groups: yearlings, 2½-year-olds, 3½-year-olds, and bucks 4½ or older. Each buck wore a collar that collected a GPS location every 30 minutes from August 24 to November 22, which includes the unusually early rut at this location (80 percent of breeding in this population occurs between September 20 and October 30). My study included over 116,000 GPS locations! 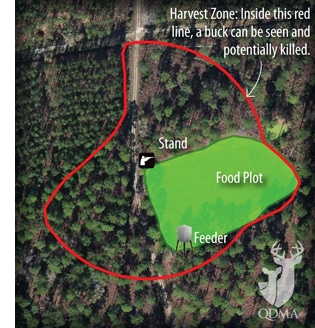 Brosnan Forest was actively hunted while the bucks were being tracked. To study the effects of hunting pressure, we mapped “harvest zones” around each of the hunting stands on the property, representing the area around each stand in which a hunter could see and potentially kill a deer. In the example shown on the right, a deer hanging out in the thick planted pines northwest of this stand would be “safe,” while any GPS locations falling within the red “harvest zone” during daylight hours would put the buck at risk of harvest.

In addition to the buck locations, we also had access to information about when, where, and how long hunters were in stands. We used these data to get a more detailed look at the immediate, or short-term, effects of hunting pressure on deer behavior. Specifically, we wanted to know if the number of hours spent hunting a stand over the previous week had any effect on the likelihood that a deer would enter the “harvest zone” during daylight hours.

We found an immediate effect of hunting pressure, where the amount of time spent in a particular stand over the course of a week impacted deer behavior. The odds of a buck entering the “harvest zone” during daylight hours were reduced by half after 12 hours of hunting pressure. In other words, a buck was twice as likely to avoid putting itself at risk if the stand had been hunted for 12 hours over the course of the previous week.

Knowing that hunting pressure does indeed affect deer behavior, we set out to answer one final question: Once a stand is hunted, how long does it take for a buck to recover from the intrusion? We once again examined the probability of a buck entering a “harvest zone” under six different circumstances: the stand hadn’t been hunted within the past five days, it was hunted the previous day, and it was hunted two, three, four and five days ago. 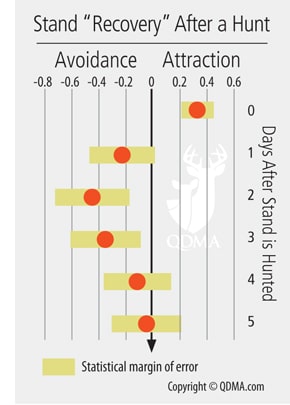 The graph on the right shows how bucks, on average, responded to each of these scenarios. If the stand had not been hunted in the previous five days, deer seemed to be attracted to the stand site. This is not surprising given the fact that most stands are set over food plots and feeders that would naturally attract deer. However, if the stand was hunted the previous day, bucks appeared to respond immediately and displayed avoidance behavior. This avoidance lasted on average for three days. By the fourth and fifth days following a hunting event, the response was no longer significantly different from neutral, and thus deer were no longer considered to be avoiding the hunted stand – though they still were not “attracted” to the site as they were before the stand was hunted.

It’s easy to get in a routine and sit the same stand time after time, especially if it has produced in the past or if you have trail-camera photos of a big buck in the area. It’s easy to think, “If I keep hunting this stand, I’m bound to cross paths with that buck at some point.” The results of our research suggest just the opposite – the more that stand is hunted, the less likely deer are to pass within range of it. There are always exceptions to the rule, and big bucks get killed every year in heavily hunted areas. But, our findings suggest that to improve your chances of encountering deer, avoid making yourself predictable. By hunting one of your favorite spots too often, you may be unintentionally affecting deer movement and behavior patterns in the area, leading to reduced chances of success.

Though I have long thought about the effects that too much hunting pressure can have on deer movement, the findings from our study have convinced me to pay more attention to the potential impact of every hunt.

Learn more about my GPS-collar research in these additional articles on NDA’s website:

About the Author: Clint McCoy is a deer biologist with the Ohio Division of Wildlife. He earned a master’s degree in wildlife science at Auburn University, and he conducted the research featured in this article while working on his Ph.D., also at Auburn. He earned his bachelor’s degree in biology at Davidson College. Clint is an NDA member and was a featured speaker at the 2014 QDMA National Convention.