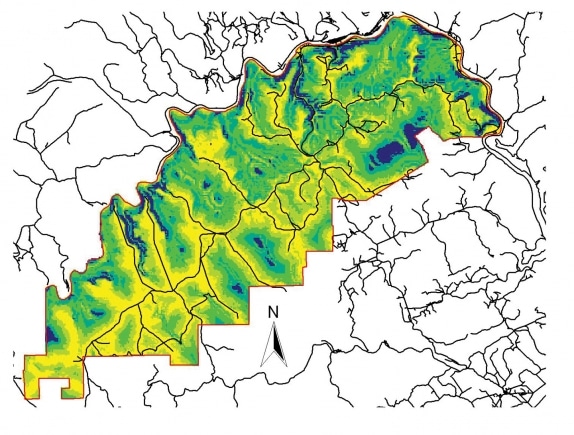 Density, distribution and travel patterns are things we often seek to learn about deer, but researchers from Penn State University set out to learn the density, distribution and habitat use of deer hunters. They used aerial surveys to estimate hunter use of a 114,000-acre portion of Sproul State Forest in north-central Pennsylvania. Since Pennsylvania hunters are required by law to wear more than 250 square inches of hunter orange on their head and upper body, and since surveys were conducted in December after leaf drop, hunters were easily spotted from a low-flying plane. Aerial surveys were flown on the second and third day and the first Saturday of the 2002 deer season.

The results are shown in the map. The yellow areas represent the highest density of hunters recorded. The dark blue areas saw essentially no hunting pressure. Basically, deer hunters were more likely to be found a short, easy walk from their truck: they were nearly three times less likely to hunt in an area for every increase of 550 yards from a forest road (one third of a mile). Also, an area was 1.5 times less likely to be hunted for every 5 degree increase in slope. Overall it was calculated that 87 percent of deer hunters hunted on 56 percent of the land, which is the percentage of the area within one third of a mile of a road. The density of deer hunters within a third of a mile of a road was six times the hunter density on the rest of the area. Researcher Duane Diefenbach and his co-investigators concluded: “Under current regulations and low hunter densities, recreational hunting may not be an effective tool for controlling deer populations on large tracts of public land in Pennsylvania with similar topography and road networks.“

Whether you hunt public or private land, the lesson is clear: unintended, “de facto” sanctuaries are often found in areas with low accessibility or difficult terrain. You can hunt un-pressured deer by being willing to walk – and hopefully drag – a little farther than your hunting companions.