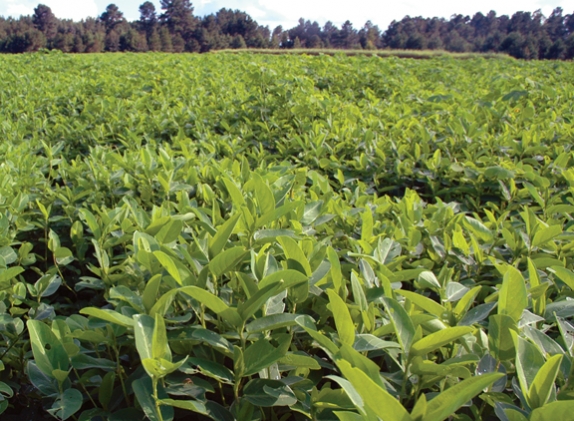 Alyceclover is a warm-season annual legume that is primarily used in pastures as livestock forage or managed for hay production. Despite the name, alyceclover is not a true clover, as it does not bear a trifoliate leaf that is characteristic of true clovers.

Alyceclover performs fairly well under a variety of soils and climatic conditions. However, it does not tolerate wet soil conditions. It is primarily adapted to the Gulf Coast states and mid-Atlantic region, however, it can be grown with good success in other parts of the eastern U.S. Regarding soil preference, the best production occurs on sandy loam to clay soils.

Alyceclover has a thin stem with rounded to oval-shaped leaves that are light green and can reach heights in excess of 3 feet but rarely does so due to grazing pressure. The flowers are reddish-purple.

Alyceclover’s attractiveness to deer varies, depending on factors such as deer density and habitat quality. Overall, I would consider it to be moderately preferred. In forage trials conducted across Tennessee, deer use of alyceclover varied according to deer density. In areas with high populations, deer consumed greater than 90 percent of the available alyceclover as expected. Conversely, in low density herds, deer use was virtually nonexistent at less than 5 percent. While this may seem like an obvious outcome – fewer deer results in less use – this was not the case for some of the other summer forages that were tested simultaneously, such as soybeans and lablab, which still received heavy use in areas with a low deer density.

The overall nutritional quality of alyceclover is excellent. In terms of crude protein, alyceclover typically contains 20 to 30 percent in fields with good soil fertility. It is also highly digestible, which is an essential ingredient of a quality summer forage.

While alyceclover is somewhat tolerant of low soil fertility and acidity, optimum production will only be achieved with a neutral soil pH (above 6.0) and nutrient levels in the high range for nitrogen (N), phosphorus (P) and potassium (K). Thus, a soil test should always be conducted to determine how much lime and fertilizer needs to be applied to ensure these conditions are met. Doing so will ensure deer on your property are rewarded with a lush stand of highly nutritious and attractive forage to help them through a sometimes rigorous late summer stress period.

Although initial germination and growth is relatively slow for alyceclover, it is extremely productive and can produce an impressive 2.5 to 3 tons (dry weight) of quality forage per acre throughout the growing season. Once established, alyceclover is quite resistant to grazing pressure. It also ranks fairly high in terms of drought tolerance

As I mentioned above, soil testing should be conducted to ensure the appropriate amounts of lime and fertilizer are applied to make sure nutrient levels are high and readily available by maintaining a neutral pH greater than 6.0.

Alyceclover does not need nitrogen fertilizer since it produces its own. However, phosphorus and potassium are important for optimal growth, nutritional quality, and attraction.

If broadcasting the seed, be sure to create a smooth, firm planting surface to promote optimal germination. If no-till planting, kill the existing vegetation with glyphosate to eliminate weed competition a couple weeks prior to planting.

Alyceclover can be successfully established either broadcasting or no-till planting. If planting pure stands, broadcast 20 lbs./acre or drill 10 to 12 lbs./acre at a maximum depth of 1/4- to 1/2-inch. It should be planted in April to June in southern regions and May to June further north.

Like most planting strategies geared toward whitetails, planting a blend is recommended in order to diversify your plots and extend the window of food availability throughout the growing season. This is especially true considering alyceclover is relatively slow to establish. Including a species that is quick to establish, such as cowpeas, soybeans, or buckwheat, will prove to be beneficial in terms of attracting deer more quickly as well as extending the life of the food plot.

Another benefit of alyceclover, which may prove to be the most practical reason to plant it over some of the other popular summer forages, is it can be successfully established by top-sowing. Simply kill the existing vegetation with glyphosate a few weeks prior to planting and broadcast the seed on top of the ground just before a rain. This is a perfect strategy if you don’t own large equipment or for those hard-to-reach plots with limited access.

Although most legumes are typically sold pre-inoculated, be sure to inoculate alyceclover with strain EL (same as cowpeas) if planting non-inoculated seed. Doing so will enhance nitrogen fixation and result in a more healthy and attractive stand.

Overall, alyceclover makes an excellent choice as a summer forage for deer. It ranks well in many of the desirable qualities that you look for in a summer deer forage, such as drought tolerance, resistance to grazing, productivity, attractiveness, and nutritional quality. If you’re looking to try something different in your summer plots this year, give alyceclover a shot. It won’t let you down!