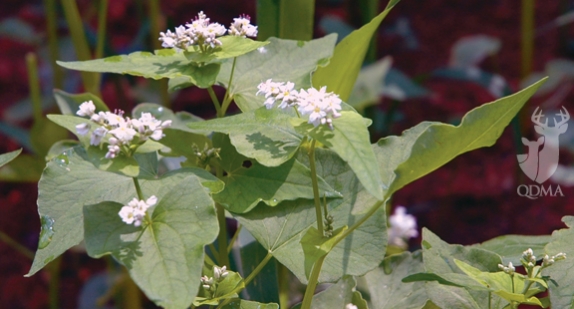 Buckwheat (Fagopyrum esculentum) is a warm-season annual forb that can provide several benefits to your whitetail food plot program. However, it is not a legume, as are some of the more commonly planted summer deer forages, such as soybeans, cowpeas, lablab, and alyceclover.

Buckwheat reaches heights of 2 to 4 feet at maturity. The plant has a single stem, often with numerous branches along the upper portion of the plant. The alternating leaves are several inches long and heart-shaped. It also produces many white flowers. The seed is tannish-brown and somewhat triangular shaped and looks similar to beech nuts. Each fruit contains a single seed inside a hard outer hull. Ducks, doves, turkeys, and other birds relish the seed, which is why it is commonly used in dove fields, waterfowl impoundments, road sides, and firebreaks.

Buckwheat matures very quickly – approximately 10 weeks after germination. It will mature even quicker if it is planted later in the growing season. This is why buckwheat is a popular planting in regions with a short growing season, or grown as a second crop within the season. Crude protein levels in buckwheat forage are quite impressive, ranging from 15 to 25 percent in well-managed soils.

One of the primary benefits of buckwheat is its adaptability to various soil and climatic conditions across North America, in addition to its tolerance of low soil fertility and pH. It is truly one of the most adaptable forages and has a knack for making something out of nothing.

However, as with any other forage being managed for deer and other wildlife, it performs better if soil quality is addressed through proper liming and fertilization according to soil test recommendations.

Another benefit of buckwheat is its soil-building nature for future plantings. The plant residue increases organic matter and releases a significant amount of phosphorus that will be available for your fall plantings, improving the nutritional quality while reducing fertilizer costs.

As with any planting, soil testing should be conducted to ensure you apply the appropriate amounts of lime and fertilizer to make sure nutrient levels are high and readily available by maintaining a neutral pH greater than 6.0. Buckwheat does not require much nitrogen but responds well to phosphorus and potassium. Thus, applying 20 to 30 lbs./acre of nitrogen, along with a minimum of 40 lbs./acre of phosphorus and 40 lbs./acre of potassium, will result in a quality stand. However, an accurate soil test is the best way help you determine the appropriate nutrient levels to apply for buckwheat. 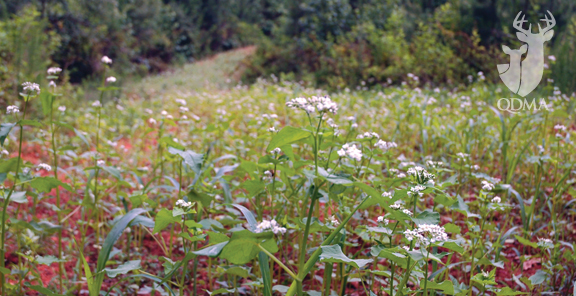 Above: This photo shows a young plot of buckwheat with cowpeas and sorghum. The buckwheat has already flowered before the other crops have begun to mature. Because it germinates quickly and can rapidly form a dense canopy that shades out weed competition, go with a lighter rate of buckwheat when planting in a blend with other summer crops.

Buckwheat is very easy to establish and can be planted after the last frost throughout the entire growing season, depending on where you are geographically. This is really the only difference in planting and managing buckwheat. Southern food plotters have a longer growing season to work with, which offers more flexibility for planting as early as April or as late as September. However, buckwheat can be managed just as effectively in northern regions, with a general planting window of May through August. In areas with a long growing season and with proper management and a little cooperation from Mother Nature, early planted buckwheat may produce two to three stands during the summer due to its ability to reseed.

Buckwheat can be planted alone or in a blend with other warm-season annuals like cowpeas, soybeans and lablab. If planting alone, broadcast approximately 40 to 50 lbs./acre or drill at 30 to 35 lbs./acre at a depth of ½ to 1 inch. If mixing with other species, reduce the seeding rate according to the number of species included. This is especially important with buckwheat because it establishes so quickly and can suppress other forages that are slower to establish. Also, if planting in marginal seedbed conditions, consider slightly increasing your seeding rate to account for reduced germination.

Once buckwheat is planted, its rapid germination and growth rate is an excellent weed suppression mechanism. It quickly forms a dense leaf canopy, suppressing many weeds due to the shading/smothering effect.

In most situations, I prefer to plant highly productive forage legumes like soybeans, cowpeas and lablab during summer before I plant other species like buckwheat. On a per-acre basis, buckwheat simply doesn’t stand up to these others, as annual production is typically less than half the production of forage legumes – 2,500 to 3,000 lbs./acre dry weight for buckwheat compared to 7,000 to 8,000 lbs./acre with forage legumes. Thus, I can more effectively maximize the nutritional carrying capacity of the food plot acres I have at my disposal.

However, there are some situations where buckwheat excels. Because it grows so rapidly and has a short maturation period, it’s perfect for providing a quick food source with a mid- to late-summer planting when natural food sources begin to play out. Because of its adaptability, buckwheat is also well suited for areas that may be difficult to access with heavy equipment to properly manage soil quality, or in fields where it may be difficult to achieve a quality seed bed like where rocks or rough soils are a problem.

Although buckwheat wouldn’t be considered a “top shelf” summer forage for deer, it can provide several benefits depending on your goals and resources.