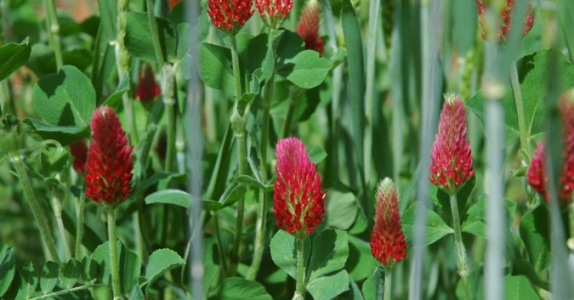 Chances are if you’ve ever bought a commercial cool-season food plot blend, you have probably planted crimson clover. Crimson clover is a cool-season annual (in southern states) that is relatively easy to grow and is more tolerant of poor soils than other clovers. For that reason, this clover is often thrown in the mix when it comes to wildlife seed products. If you are new to planting clovers, crimson clover would be a good place to start as it is highly attractive to deer, germinates well and can produce a lush food plot as a stand-alone crop or mixed with other small grains or legumes. Crimson clover does not tolerate cold; in northern states it is best planted in spring as a warm-season annual.

Crimson clover looks very typical of clovers and has three relatively dark, rounded leaves and can grow to heights of over two feet. This clover gets its name from the brilliant crimson flowers it produces in the spring (it’s easy to confuse it by name with “red” clover, which is a perennial, and has flowers that are more pink than red). Like other clovers, crimson is highly attractive, nutritious and extremely digestible to deer. Although an annual, it often reseeds itself and can persist for several years in this manner.

While crimson clover is more forgiving of poor soils, it still prefers a well-drained loamy soil. It can handle a pH as low as 5.7 but prefers soil with a pH from 6.0 to 6.7. Soil testing is the best way to determine if lime needs to be added to adjust the pH. Because crimson clover is a legume, the seed should be inoculated with the correct strain of Rhizobium bacteria (strain R) before it is planted. In many commercial blends, the seed is pre-inoculated.

Seedbed preparation is critical when planting small-seeded crops such as crimson clover because you want to avoid burying the seed more than a quarter inch deep. Disk or till and then smooth the seedbed by cultipacking to prepare for ideal planting conditions. Seeds can be drilled in at a rate of 10 to 15 lbs./acre. Broadcast seed at a rate of 20 lbs./acre for a pure stand of crimson clover. It is best to cultipack both before and after the seed is planted to ensure good soil contact.

Because it is a legume, nitrogen is not as important in the establishment of pure stands of crimson clover. A fertilizer light in nitrogen but containing adequate amounts of potassium and phosphorus should be used in the absence of a soil test. For stands that are mixed with cereal crops such as wheat or oats, go with a more balanced analysis. Crimson actually establishes better when mixed with a nurse crop such as a small grain. When planting in mixes, go with 10 to 15 lbs./acre of crimson clover and 30 to 40 lbs./acre of oats, wheat or rye.

Depending on how you manage your food plots, crimson clover can provide several benefits. When plowed in after the spring it provides an excellent source of nitrogen for a summer planted crop such as millet, corn or sorghum. In warmer climates, crimson will often reseed itself in the early fall if it is mowed in late August and given an application of 0-20-20 fertilizer at a rate of 200 lbs./acre.

One additional benefit of crimson clover I have not mentioned is it’s relatively inexpensive. It is less than half the price of perennial clovers, but yet is still very productive. By adding a few small grains to the mix, you can make an attractive, inexpensive food plot.

You’ll get a complete and more in-depth profile of an important food plot species in every issue of QDMA’s Quality Whitetails magazine. Join QDMA today! 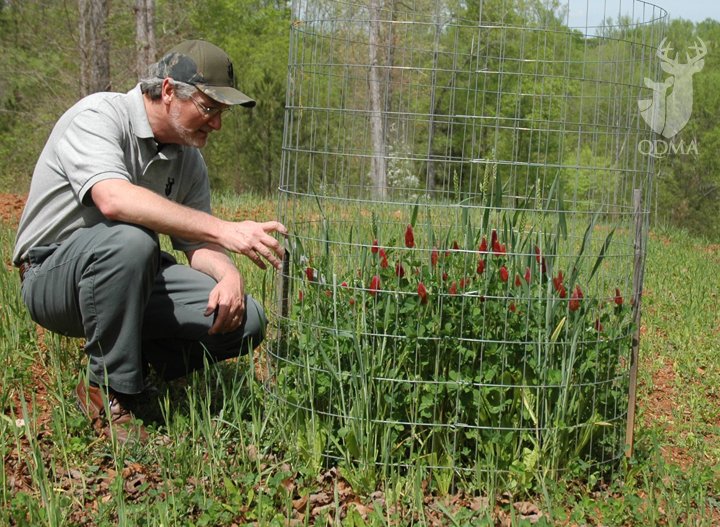 Bob Westerfield is a faculty member in the Horticulture department for the University of Georgia. He serves as the department Extension coordinator as well as a state vegetable and fruit specialist. Bob lives on a small farm in Pike County, Georgia, where he raises livestock and manages his land for whitetails and wild turkeys. Bob is an avid bowhunter, preferring to use traditional equipment in the form of a longbow and primitive black powder rifle. He is now contributing the "Food Plot Species Profile" series in every issue of QDMA's Quality Whitetails magazine.