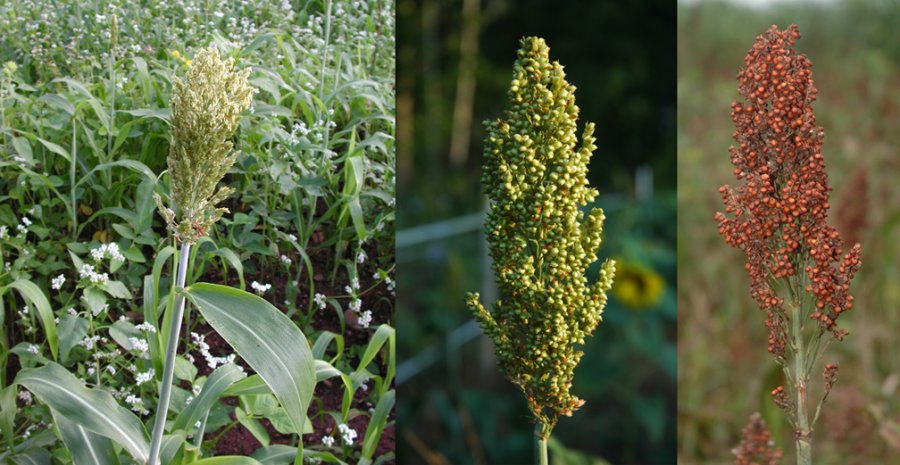 My first introduction to sorghum was on a dove field over 25 years ago. The land manager had planted several strips of sorghum that not only provided a good seed source for the birds but also excellent cover for me to sit in while waiting for the turbo-powered doves to appear. While sitting there, I couldn’t help but notice that several of the seed heads looked like they had been completely chewed off. Knowing the doves would not eat the grain until it fell to the ground, I did some detective work and saw numerous deer tracks near my location. As I gained experience and interest in managing habitat for deer, I learned that sorghum is a viable warm-season option throughout the whitetail’s range for attracting deer in fall while providing the benefit of bedding areas and cover. It also provides the added benefit of attracting other wildlife such as geese, quail and doves.

Sorghum, sometimes referred to as milo, is a member of the grass family and looks very much like corn in the initial stages of growth. The shorter varieties that produce larger seed heads are the ones best suited for deer – they were bred for grain production over silage or forage production. Some varieties of sorghum can actually reach heights of 12 feet or more and would be suitable for screening food-plot edges and other openings, but they don’t provide much nutrition for deer because their relatively small seed heads grow out of reach.

(The photo above shows grain sorghum in various stages of development, from early summer on the left to full maturity of the seed head in early fall on the right. It is this mature seed head shown on the far right that deer eat.)

While this crop is planted during the warm months of spring and summer, it actually can provide a food source for deer during the fall and winter. The nice thing about sorghum is deer do not usually eat the plant while it is in the early development stage. The only time I’ve seen deer eat sorghum before it produced seed heads was when it was planted too early before much natural food was available in the woods. Another benefit of sorghum is that, in my opinion, it is much easier to successfully grow than corn and is more drought resistant. Anyone who has grown corn knows that it doesn’t tolerate drought, particularly during the late ear formation stage. Sorghum, on the other hand, has the ability to withstand dry periods much better but still manages to put out a seed head even under diverse conditions. Sorghum is also a highly attractive and digestible source of nutrition for deer that provides a source of carbohydrates during the winter months and can be a great alternative to planting corn in areas where natural, cool-season vegetation is scarce. Consumption of carbohydrates is even more important in the northern climates where temperatures can get extremely cold. In the Deep South, where late-summer can be a nutritional stress period for deer, deer often consume sorghum seed heads as soon as they are mature in August or September. This fills a nutritional need, but if you want sorghum to remain available until later in fall, adjust your planting date accordingly based on the maturation rate of the variety you are planting (it ranges from 60 to over 100 days) while allowing time for maturity before first frost.

Sorghum grows best on fertile, sandy- loam soils but can tolerate a wide range of soil types. My food plots consist of loamy Georgia red clay, and I’ve had no trouble getting sorghum to grow on it. Soil testing will help assure you have the right fertility and pH conditions prior to planting. Sorghum does best when the pH is between 6.0 and 6.8. If lime is necessary to raise the pH, it’s best to do it the fall before planting the crop. This allows more time for the lime to help neutralize the acidity of the soil.

Soil temperatures for planting are more critical than air temperatures. Sorghum does best when planted once soil temperatures warm to between 60 and 70 degrees Fahrenheit. Sorghum can be broadcast at a rate of 10 to 15 lbs./acre or drilled at a rate of 5 lbs./acre. You can also use a pull-behind row-planter designed for corn or small grains. Be careful not to overplant – I have made the mistake of using too high a seeding rate on this crop, which results in tall spindly plants with fewer heads. Seed germinates best when it is either drilled or buried to a depth of about three quarters of an inch. While not quite as much of a fertilizer user as corn, sorghum does like its nitrogen. Without the aid of a soil test, fertilize at planting time with 300 pounds of 19-19-19 per acre. To improve the crop, broadcast an additional 80 to 100 pounds of actual nitrogen (175 to 220 pounds of 46-0-0) per acre 6 to 8 weeks after planting.

I went into more detail on weed control, sorghum varieties, and potential blends with other crops in the full sorghum profile in QDMA’s Quality Whitetails magazine. Join QDMA to start receving the magazine, which contains a food plot species profile in every issue.

Consider adding sorghum to your warm-season food plot plans. I personally like planting sorghum because it’s tough, relatively easy to grow, it attracts deer, and it gives me a place to sit and hide while I’m dove hunting!

Bob Westerfield is a faculty member in the Horticulture department for the University of Georgia. He serves as the department Extension coordinator as well as a state vegetable and fruit specialist. Bob lives on a small farm in Pike County, Georgia, where he raises livestock and manages his land for whitetails and wild turkeys. Bob is an avid bowhunter, preferring to use traditional equipment in the form of a longbow and primitive black powder rifle. He is now contributing the "Food Plot Species Profile" series in every issue of QDMA's Quality Whitetails magazine.