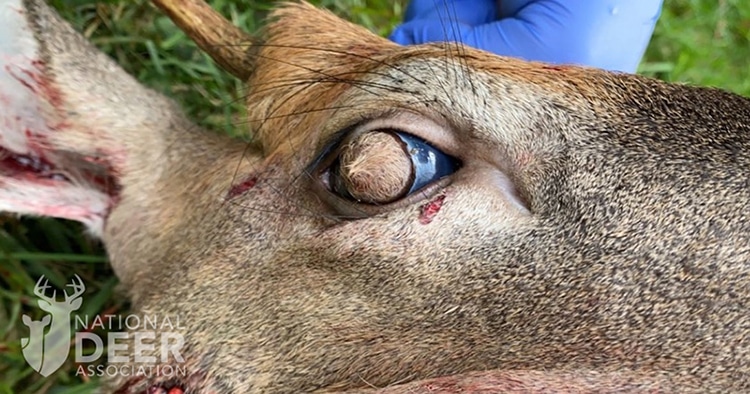 In the first 6 months that the Tennessee Wildlife Resources Agency offered a new “Report Sick Deer” button on their website, the hotline netted one of the weirdest sick whitetails in history, one of only two known cases ever documented. I’ve reported on a lot of weird deer in my career as a hunting journalist, and if I gathered all of them for a freak-show at a carnival, this one would be the main attraction. Step right up if you dare. See the buck with hairy eyeballs!

Yes, that is what I said.

The report came in from Farragut, a suburb of Knoxville in east Tennessee, in late August 2020. “The individual stated the deer was circling, had visible bleeding, lacked awareness of the people around it, and had something on its eyes,” said wildlife biologist Sterling Daniels of TWRA.

The deer was circling in a street, so local police and animal control officers were also alerted, responded first and dispatched the deer, saving the head at Sterling’s request, which he picked up later from a freezer. He shipped it to the Southeastern Cooperative Wildlife Disease Study unit (SCWDS) of the University of Georgia vet school for CWD testing. In his report to SCWDS, he also noted that hair appeared to be growing on the surface of both of the deer’s eyes.

The CWD test was negative – thankfully, since CWD is established in western Tennessee but has not been found in the east. However, the deer tested positive for epizootic hemorrhagic disease (EHD), which likely explains the circling and lack of fear. Deer suffering with the EHD virus experience high fevers and other disorienting symptoms.

But EHD does not explain its eyes.

As you can see in these photos, instead of a normal cornea (the clear circle that includes the pupil and eye color), the buck had a disk of skin and dense hair completely covering the cornea of each eye. Microscopic examination at SCWDS determined the hairy growths were “corneal dermoids.” 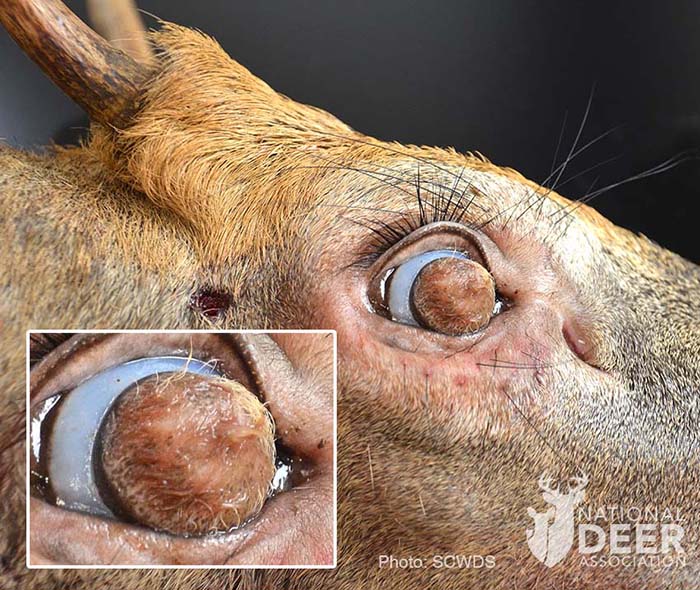 “Dermoids are a type of choristoma, which is defined as normal tissue in an abnormal location. Accordingly, dermoids are characterized by skinlike tissue occurring on the body in a location other than on the skin. Corneal dermoids, as in the case of this deer, often contain elements of normal skin, including hair follicles, sweat glands, collagen, and fat. The masses generally are benign (noninvasive) and are congenital, likely resulting from an embryonal developmental defect.”

In other words, it’s a developmental glitch in which specialized cornea tissue fails to form as it should and defaults to skin. Other than being covered by hairy skin, the internal structures of the buck’s eyes were normal.

The buck was a yearling, so I asked Dr. Nemeth, an associate professor in the Department of Pathology at SCWDS, whether the deer was born like this and survived blind for 1½ years, or whether the dermoids formed more recently. 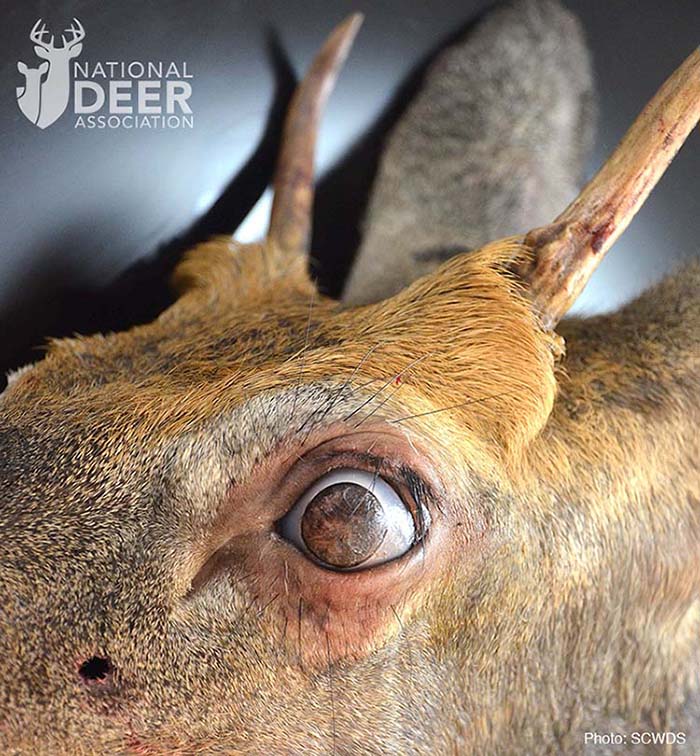 “We assume these to be congenital (existing at birth), so we surmised that it survived a long time with those,” she said. “Again, assumptions, but we also assumed the dermoids developed gradually and that the deer was able to adapt to its decreasing field of vision over time. How fast they develop over time probably isn’t well known and may vary case to case.”

The area where the deer was found is a fairly developed suburb of Knoxville, and while there is less hunting and fewer coyotes than in more rural surroundings, there is lots of traffic, so I am amazed the buck survived long enough to grow its first set of antlers as a yearling and run into trouble with EHD. Having seen the buck’s eyes up close, Sterling doubted it could see at all.

“We also assumed the dermoids developed gradually and that the deer was able to adapt to its decreasing field of vision over time.”

Of course, the buck’s survival is less amazing when you consider it had a sighted caretaker for probably a year of its life: the doe that nursed and protected it for months and still may have been nearby when the buck contracted EHD.

In fact, the Tennessee deer is only the second documented case of corneal dermoids in a whitetail. The first case was a 1½-year-old Louisiana doe killed by a hunter in 2007. That deer had dermoids only in the left eye, and there were three distinct masses covering the cornea. Dissection of the masses discovered they consisted of densely haired skin supported by connective tissue – which included small amounts of cartilage and even bone.

According to SCWDS, aside from obscured vision, corneal dermoids do not pose a health threat, either at the individual or population level.

Speaking of deer health threats, kudos to the citizen who hit the Report Sick Deer button on the TWRA website, and good work by TWRA to provide that button. To stop CWD from spreading and taking root in new areas, one of the most important things every hunter can do is report sick or weird-acting deer to their state wildlife agency as quickly as possible. If CWD is caught in the earliest stage of arrival in a new area, it can be stopped. Wherever you hunt, fight CWD by being the eyes and ears of your state’s wildlife professionals.