Get Bucks on Camera, No Bait Required 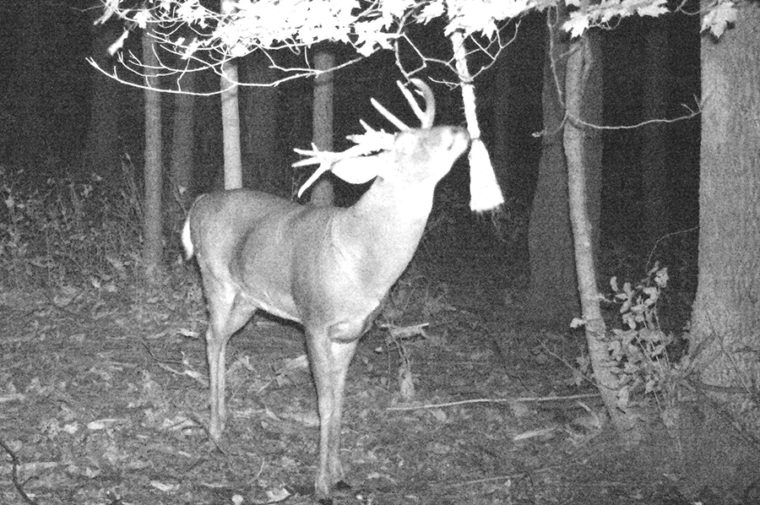 I recently moved to Illinois where feeding or baiting deer is illegal at all times of the year, and getting pictures of bucks suddenly became much more difficult. For me, trail-camera pictures control future hunting decisions, and I simply could not accept getting so much fewer pictures. I need to know which bucks to hunt. I need to be getting pictures regularly so I know when to hunt them. Although more effort is now involved, I found a three-step approach to trail-camera placement without bait that can work for anyone.

Previously, I lived in a state where placing supplemental feed outside hunting season was legal. My trail-camera strategy was very straightforward: minerals in summer, scrapes in fall, and corn for post-season inventory in winter. Although, I can no longer place minerals, corn or other bait, the principle of that approach still exists: feeding locations in summer, scrapes in fall, and back to feeding locations in winter. The trick is how to get high numbers of deer in front of a camera in the summer and winter when you may be targeting large feeding areas like ag fields or food plots. This three-prong approach worked for me.

Step 1. Funnel Movement to the Camera

I’m not talking about placing trail-cameras in natural funnels, though that’s the general idea with a non-baited approach. I am talking about forcing deer to enter feeding locations at one specific point. This requires erecting fencing or creating brush blockades with your chainsaw or heavy equipment like a skid steer. Force all the deer to enter an ag field, natural opening or food plot at one or two specific points. This is by far the most effective way to get more pictures. It can certainly require a good bit of effort in some cases, but it is well worth the time. Smaller food plots or micro attraction sites, like fruit or oak trees, may set up well for easier blockading depending on natural barriers that are available. Then, a few careful hinge-cuts with your chainsaw might be all it takes to direct most deer past your camera as they enter or leave the site.

Remember to think about how you will access the camera with minimal disturbance. By placing cameras at pinch points between two habitat types you can access your cameras along edges while likely staying out of cover, reducing the amount of pressure you place on a property. I like to place cameras on the side of the pinch point where I can access the camera without ever crossing the path I expect deer to walk. 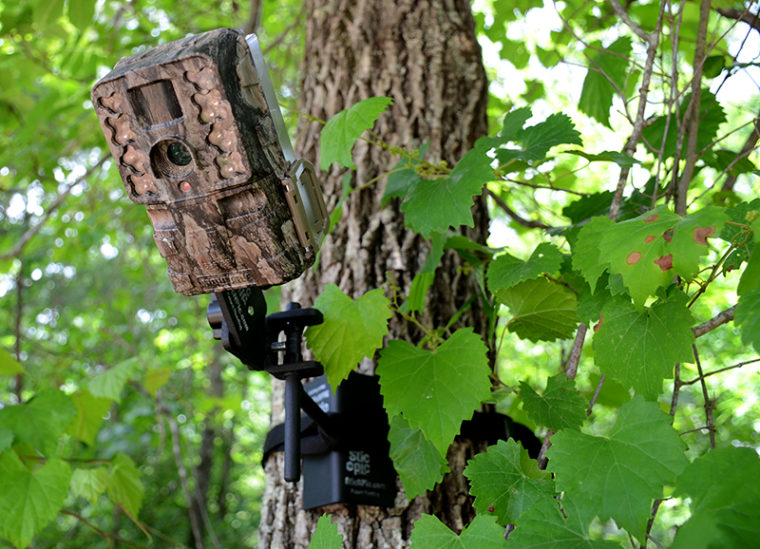 If hiding a camera in natural cover is not an option, use a mounting device to place the camera high overhead and aimed downward.

I used to put up my cameras over minerals or bait, and it really didn’t matter what kind of tree the camera was hung on. There could be a bare, 4-inch diameter tree a mere 8 feet away from the bait pile, and deer would get accustomed to the camera because they wanted whatever was in front of the camera so badly. However, once you remove the incentive for a deer to fight against it’s natural instincts to avoid a foreign object, you need to make sure the camera is much more inconspicuous.

Just like humans, deer are all individuals, and there are some that get used to the cameras very easily and others that will forever be camera-shy. If you place a camera on a fencepost, bare sapling, or camera-stick in the middle of a plot, I’m sure some resident deer will get used to it, but what about a traveling buck that doesn’t come through your hunting area very often? He could see that camera from 40 yards away and avoid the camera’s field of view. I particularly want to get his picture, so I need to hide my cameras to minimize avoidance.

I like to choose small trees with multiple trunks and place the camera right above a fork or next to a branch. It doesn’t hurt to back the camera with natural camouflage in the form of branches, leaves, vines or anything else that will help break its outline. Just make sure you don’t block the camera lens ports or leave branches hanging in the photo frame. It’s these small additional features that help blend the camera into its surroundings. Sometimes I hang cameras above head height and angle them down to get them out of a deer’s field of view, but it can be tougher to estimate the age of a buck in a photo taken from a high angle. 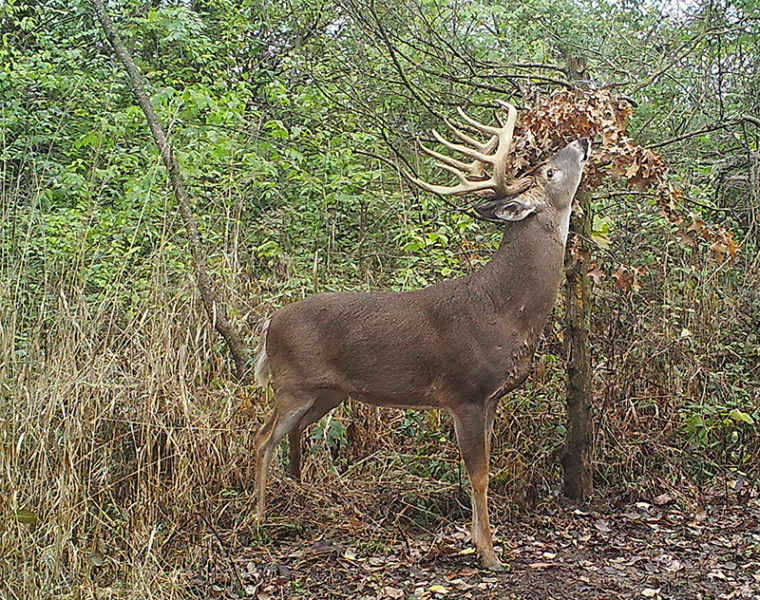 The author planted a red cedar post at this site to serve a scent marker. It stopped this buck in the camera frame for several shots.

Deer communicate to each other not only through vocalizations but also through their scent glands. They will take advantage of objects placed in the right locations to rub their forehead, nasal and preorbital glands on these objects as well as chew on these items for added salivary scent. I like to hang frayed ropes (see the photo at the top), “plant” cedar posts, or use a small sapling-holder made by Hodag called a Flex Plate (photo below). These may or may not become scrape sites in the fall, but their intention is year-round communication. By placing one of these objects at the pinch point you have created going into a feeding area you will get every deer’s picture as it scent checks the licking item before it goes to feed. 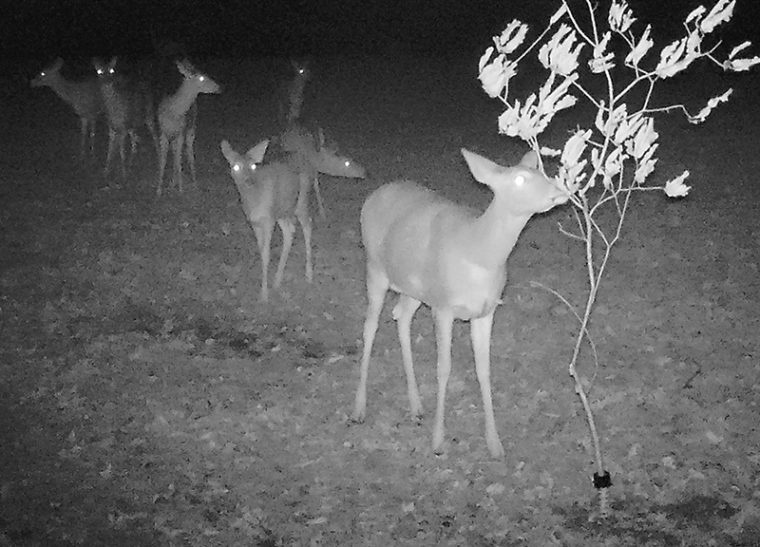 A branch or post placed in an otherwise open area can focus deer activity by attracting them to scent-check the limb.

Using Step 1 you have forced deer to a specific camera site. Using Step 2 you have kept deer from noticing and avoiding the camera. Step 3 allows you to get multiple pictures of a deer instead of one picture as he walks by that may or may not be a quality picture. Step 3 is where I have found the quantity of pictures really has the potential to increase.

If laws don’t allow you to use bait where you hunt, you can still get plenty of great trail-camera photos. Stay in the game by funneling movements, hiding your cameras and providing an object for scent marking.

About the Author: Wes Delks is an NDA member from Illinois and General Manager / Co-Owner of Real World Wildlife Products. He got his first trail-camera for Christmas as a kid, before he was even a deer hunter, and later earned a bachelor’s degree in wildlife science from Purdue University. He and his wife Madison live in Illinois.

View all Articles By Wes Delks