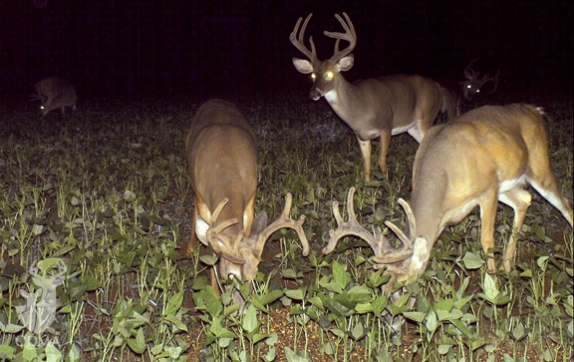 You hear it all the time: A hunter gets a bunch of trail-camera photos of a buck early in the season and then, poof, the deer pulls a Houdini and disappears for the rest of the season. How nice would it be to track his movements and know exactly where he went? Well, that’s what I was able to do with 37 bucks at Brosnan Forest, a 6,400-acre study site in the Lowcountry of South Carolina. My graduate research at Auburn University focused on buck movements in relation to breeding strategies and hunting pressure, but I’d like to share a few examples of buck behavior that could help you understand those early season vanishing tricks.

Before we get into the maps of buck movements, here are a few details: Each buck wore a collar that collected a location every 30 minutes from August 24 to November 22, which includes the unusually early rut at this location (80 percent of breeding in this population occurs between September 20 and October 30). The dots on the maps below are waypoints from GPS collars.

Now let’s look at some buck behaviors. Early season vanishing tricks can often be attributed to a home-range shift like the one you see here: 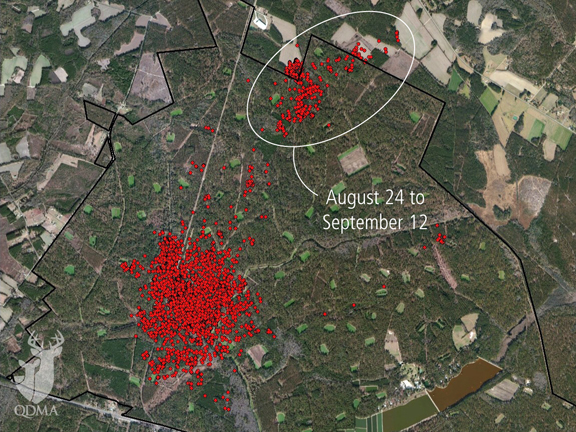 For the first few weeks of monitoring, from August 24 to September 12, this 2½-year-old buck lived in a small area at the northern edge of the property (the black line is the study-site boundary). Then, like someone flipped a switch, he moved back down to the southern portion of his range for the rest of the season (where we originally captured and collared him the previous spring). Taking a closer look at where he spent the early part of the season, it becomes clear what the motivations were for traveling nearly 2 miles from his “home” to set up shop for a couple of weeks: 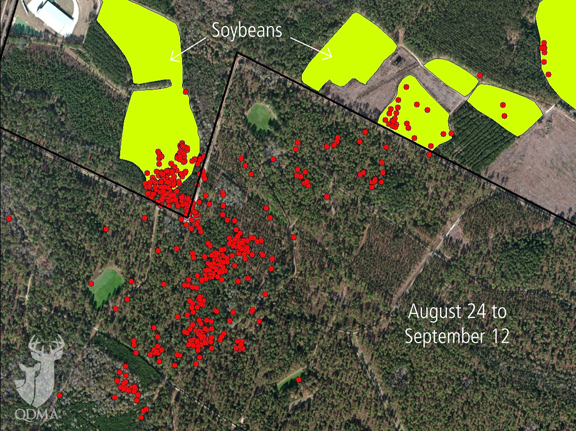 The one thing that Brosnan Forest didn’t provide that could potentially attract deer was being produced in an agricultural field just north of the property boundary – soybeans! Not only did this major deer attractant cause one of our study animals to completely shift his home range for the early part of the season, but it affected several other bucks as well.

Take a look at another 2½-year-old deer from our study, and the locations look very similar to the previous buck: 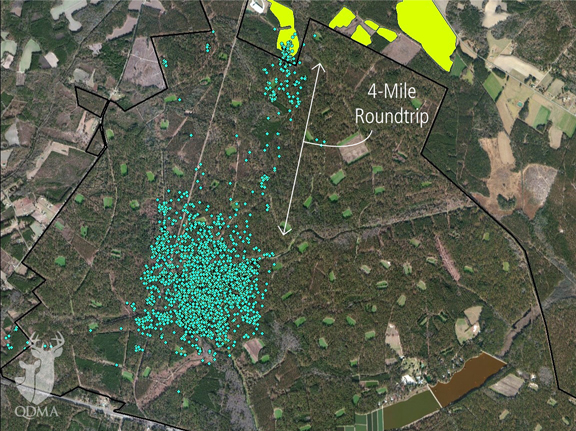 However, this time, the cluster of points at the northern edge of the property weren’t a result of a home-range shift, but rather a culmination of several overnight trips from the center of his home range to the neighbor’s bean field. Soybeans were so appealing to this buck that, on multiple occasions, he traveled over 4 miles in a single night to feast on them. Here’s a look at his movements on one of those nights: 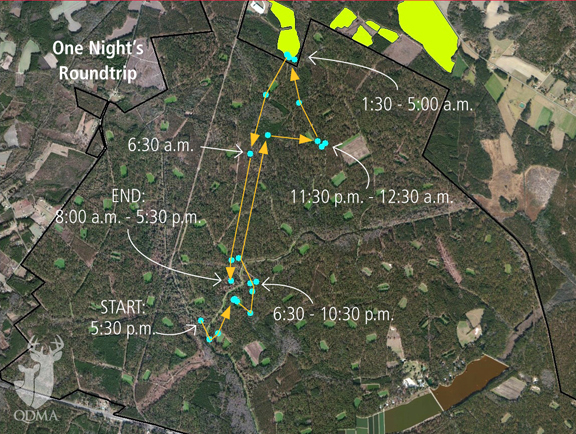 As a final example of how a neighboring property’s soybean field affected the movement patterns of some of Brosnan’s resident bucks, take a look at the locations of this 4½-year-old buck: 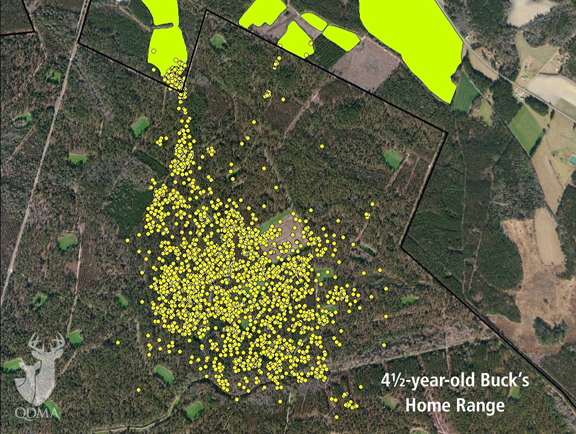 This buck didn’t have to travel very far to get to the bean field (about ¾ mile), and it is obvious from the solid line of points extending from his primary home range to the bean field that he was a regular customer. At first glance, you may be thinking the same thing I did when I first saw this buck’s movements – put a stand on the southern edge of that bean field! That sounds good in theory, but setting up on the edge of the bean field, or even 100 yards south of it, would not have yielded a single sighting of this buck, as you can see when you examine the timing of his movements: 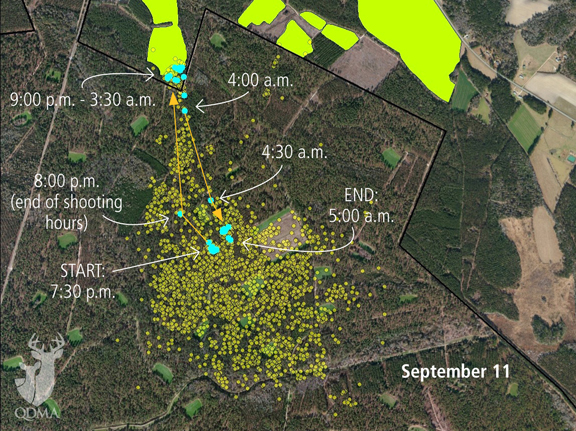 Not once did this buck approach the field before 9 p.m., and even more frustrating, he was always back in the safety of his bedroom before the sun came up the following morning. There was only one option for a hunter to take advantage of this buck’s predictable feeding pattern: squeeze in as close to the buck’s bedding area as possible. Although he never approached the bean field before dark, he was typically up and moving about 30 minutes before the end of shooting light, providing a small window of opportunity for hunters tightening their grip on this buck’s preferred bedding location. (For an interesting look at day vs. night activity for this buck during the early season, click on the map in the Gallery below).

Hopefully, revealing the movements of these three bucks will help you interpret the appearances, disappearances and day-versus-night patterns you see in your early season trail-camera photos and buck sightings.

Interested in the size of these bucks’ home ranges, and how they may or may not be related to age? You can learn more in a separate article on this site.

About the Author: Clint McCoy is a deer biologist with the Ohio Division of Wildlife. He earned a master’s degree in wildlife science at Auburn University, and he conducted the research featured in this article while working on his Ph.D., also at Auburn. He earned his bachelor’s degree in biology at Davidson College. Clint is an NDA member and was a featured speaker at the 2014 QDMA National Convention.

View all Articles By Clint McCoy