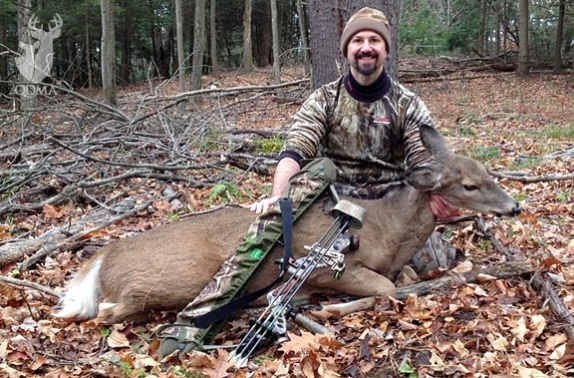 With all the recent hubbub in the general outdoor media about deer harvests being down, as well as within the pages of the newly released 2015 QDMA Whitetail Report, I’m confident there are literally thousands of deer hunters out there right now asking this very question: “Have we killed too many does?”

This query is sometimes then followed by an off-color, less-than-flattering comment about the way that hunter’s state or provincial agency is managing deer populations, or perhaps about their neighbors and the antics that are typically observed on the other side of the fence. The reality, however, is that if harvest numbers are truly down locally, any hunter or landowner can easily right this figurative sinking ship by taking ownership of the problem and by collecting a little data on the deer that use your property and the deer you and your hunting partners kill annually.

States and provinces manage deer populations at a much, much larger scale than what you or I see when we’re afield. Biologists and managers work at the state/province, county or Wildlife Management Unit level, and that’s good. We need someone looking after wildlife from this 30,000-foot perspective. But, what we get to observe and kill during any hunting season is influenced at a much smaller scale. We’re talking down to the hundreds of acres, or even to the property level. So, locally, the most significant impact – negative or positive – that can influence deer populations is us: the decisions we make. Sure, disease, severe weather and other mortality factors play a role, but each is also quite variable at the local level, and together their collective impact pales in comparison to hunter harvest. Every time you or your hunting partner, or even the neighbor, makes a decision to kill a deer, you are changing that deer population. This alone is the main reason we are seeing more and more QDM Cooperatives form every year.

For the hunter or landowner who doesn’t mind shouldering the responsibility, there are two basic methods to answer the question at hand. The first is accomplished by estimating how many deer there are prior to the season and then simply setting a goal to remove a certain percentage of that estimate. This allows you to set a target harvest prescription. Another article, How Many Does Can I Harvest?, covers this technique quite well.

The second, and the one I’ll cover below, requires you to keep a jawbone from every doe killed and have it aged, either by the tooth replacement and wear or cementum annuli technique. The goal by doing this is to get a sense of age class structure of the standing crop of female deer that live on your hunting land, as well as the fawn recruitment within the local herd, to see if deer are indeed being replaced as they’re removed. Since does and other antlerless deer don’t have antlers, their harvest generally can be seen as a random sample of what is out there walking around. Creating this age-class visual is easily accomplished by building a simple bar graph of the ages of all female deer killed every year. Like this: 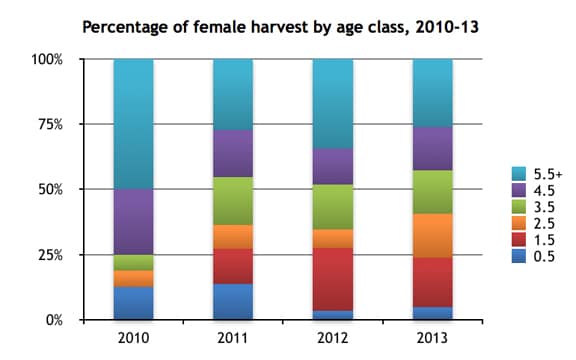 The next step is to then see what percentage of all adult females (those that are at least 1½ years old) being killed is made up by older individuals (those that are 4½-plus years old). The target range should be about 25 to 30 percent. Fall well below that and you may have a problem. If we are not shooting enough does (and the population could be too high), you’ll see higher percentages of older individuals in the harvest. If we have killed too many (and the population could be too low), it stands to reason we’ll see fewer of them.

Doing this last step provides a measure of harvest intensity, as long as fawn recruitment and hunter effort remain stable year to year. Of course this isn’t the only indicator, but it can help and it’s easy to do. Coupled with measures of deer health and habitat health, along with one or more measurements of whether the population is increasing, stable or decreasing, will provide you with all the information necessary to make an informed decision to answer the question: Have we killed too many does?

Look at a real-life example of the property I hunt on today that did not practice QDM prior to 2010. Historically there was little to no doe harvest and populations were well above carrying capacity at the start. In fact, as a testament to how long doe-harvest abstinence was practiced, hunters on this property killed a 15½- and a 20½-year-old doe after we began! In the chart below, red represents all adult does age 4½ or older in the doe harvest. More than 80 percent of does taken in 2010 were in this advanced age class! 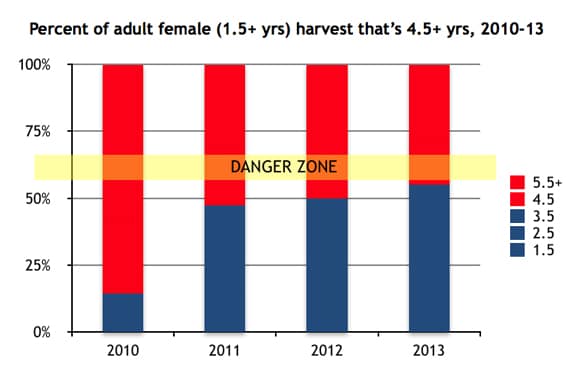 With a little guidance we jumped in with both feet and hit the does hard. But, as time passed, successive hunting seasons produced fewer and fewer deer sightings than the first couple of years – causing some people I hunt with to feel like we went overboard on the doe harvesting. Yes, we are seeing fewer deer – we needed to. Density was way too high before QDM. But collecting and analyzing things like hunter observation and age-class data allowed me to feel confident the sky was NOT falling and we had not killed too many does. The proportion of 4½-plus does in the 2013 doe harvest was still more than 40 percent (refer again to the chart above). Included in that group from the 2013 season was a 4½-year-old doe I arrowed on November 12, seen in the photo at the top. She weighed 112 pounds field-dressed. When jawbone age data is available from 2014, I will look to see if the percentage of older does is beginning to fall into the “Danger Zone.” If it is, and if other health indicators show we are at an ideal density and optimal health, we will look at moderating our doe harvest to maintain the current density. If density, sightings and fawn recruitment all begin to decrease dramatically, we can always cut off doe harvest completely for a year or two.

So, what will the 2015-2016 deer season bring? Only time will tell. But, now armed with the above information, I hope you can face future seasons the way I do. With the data and a sense of ownership that me and my hunting partners can change things for the better!