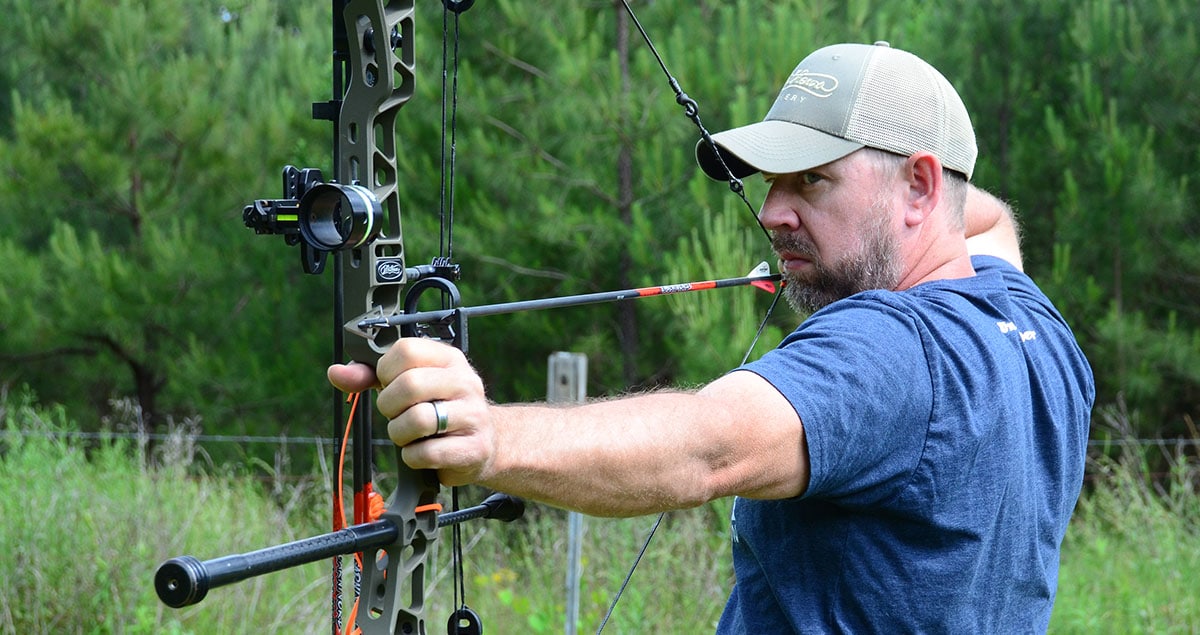 For decades now, bowhunters have seemingly been on a quest to own the fastest shooting bow possible. During that time, manufacturers often touted their bows’ IBO or ATA speeds above all other features, and hunters gladly handed over their hard-earned dollars for whichever models posted the highest numbers for that year. The quest for speed not only led many hunters to buy the latest and greatest bow each season, but many of these same hunters also turned to their arrows and broadheads to squeak out every possible foot-per-second by going as short and light as possible.

While my meager bank account during my early bowhunting days kept me from getting too caught up in the speed craze, I do remember jumping on the bandwagon by putting an old overdraw setup on one of my first hunting bows so I could shave two or three inches off of my already heavy Easton XX75 aluminum arrows. I had no idea how fast my bow was shooting or why I needed it to be any faster, but I bought into the hype that faster was better, and it made sense to me that lighter arrows would shoot faster than heavy ones. What I failed to understand at the time, and for a long time after, was the importance of momentum and the role arrow weight plays in creating it.

Before I dive too deep into the topic, let me put a big asterisk on this article — a disclaimer of sorts — that I am not a physicist. I’ve done a lot of reading on momentum, kinetic energy and their impact (pun intended) on arrow performance. Some of the science can be confusing and has been debated over the years. The information provided here was inspired by the research of guys much smarter than I am when it comes to physics, with a lot of information coming from Dr. Ed Ashby of the Ashby Bowhunting Foundation, whose mission is to “provide the bowhunter with the information to achieve highest possible success rate and reduce the wound/non-recovery rate of big game to the lowest level possible.” Dr. Ashby has dedicated much of his life to studying arrow performance and broadhead lethality, and his research helped legalize bowhunting in South Africa and other sub-Saharan countries.

With that in mind, let’s take a look at why heavier arrows can provide some valuable benefits over their lighter counterparts, and how to strike a balance between arrow weight and speed for the best of both worlds.

Oftentimes proponents of lighter, faster arrows point to the arrow’s kinetic energy as support for their preferences. Kinetic energy is expressed in the formula K.E.=1/2mv2, where m is the mass of the object (the arrow in this case) and v is the velocity (speed) of the arrow. In this formula, arrow speed is more influential than weight, because it gets squared. The problem with using kinetic energy in choosing an arrow setup is that it’s not really applicable to how well an arrow will perform on a live animal. Kinetic energy is actually a measurement of how much stored energy an object in motion has. It is non-directional, so that when an object such as a bullet makes contact with its intended target, kinetic energy is released in all directions. In firearms lingo, it’s sometimes referred to as “knockdown power.” That works well for ballistics, because of the shockwave effect the bullet’s kinetic energy has on a game animal, damaging tissue well beyond the actual bullet hole.

But the benefits of a heavier arrow don’t just stop with better penetration. Heavier arrows reduce stress on your bow and typically produce a quieter shot than a lighter arrow.

With an arrow, though, we’re not concerned with how much “shock” or tissue damage outside the wound channel is created. According to Dr. Ashby, an arrow will never produce the roughly 500 ft-lbs of kinetic energy needed to create hydrostatic shock (more on those figures later). What we as bowhunters want is for the the broadhead and arrow to pass completely through the animal, severing any arteries and cutting through any organs it contacts along the way. In other words, we are more concerned with the penetration of the arrow than its “knockdown power,” and the best way to measure potential penetration is with momentum.

Momentum is force in motion. It is directional. In other words, it is the ability of an object (an arrow in our case) to continue moving in a particular direction against resistance. The formula for momentum is p=mv; very similar to kinetic energy, but in this case, mass and velocity are equally weighted in the equation. Momentum is why even an old traditional bow shooting much slower than any modern compound bow can still manage to propel a heavy arrow completely through a big game animal. Let’s look at a couple of examples for reference.

*The slug is a measurement of force defined as the mass that is accelerated by 1 ft/s2 when a net force of one pound (lbf) is exerted on it.

So, as you can see, while a lighter, faster arrow shot from a modern compound bow produces significantly higher kinetic energy than a traditional bow shooting a much heavier arrow, the heavier arrow is actually carrying more momentum and, with all else equal, would be more likely to pass through the animal.

We’ve established that with all else equal, a heavier arrow should provide better penetration on a deer or other game animal. This is particularly important when the shot made on the animal is less-than-ideal and the arrow impacts bone like the shoulder blade. Yes, even a light arrow will likely passthrough when a perfect double-lung shot is made on deer, but not all shots are perfect. It’s good to know that even if your shot strays a few inches one way or the other, that you will likely still be working with both an entry and exit hole. And most deer with a passthrough shot through the chest cavity can be recovered.

But the benefits of a heavier arrow don’t just stop with better penetration. Heavier arrows reduce stress on your bow and typically produce a quieter shot than a lighter arrow. Consider the serious damage that can occur to a bow when it’s dry-fired. All that stored energy from coming to full draw doesn’t have a proper outlet without an arrow nocked, so when the string is released, that energy is transferred to the cams, limbs, riser and cables, often resulting in catastrophic failure. Shooting an overly light arrow produces similar, albeit reduced, stress on your bow. The lighter arrow can’t absorb all the bow’s stored energy, so that energy is again sent to the bow, producing vibration and noise and potentially damaging the bow. A heavier arrow can absorb more of that stored energy, resulting in less stress, vibration and noise.

Obviously, the news can’t be all good about heavy arrows, or everyone would be shooting 1,000+ grain mini-spears. The tradeoff for that increased weight is a slower arrow, and a slower arrow means you have less room for error when judging the distance to your target. For example, if a deer is standing 35 yards away, and you estimate it’s 30, a faster (and flatter) shooting arrow will be more likely to still hit in the kill zone than a slower one. This is not nearly the issue it was twenty years ago, however, because most bowhunters have a small, handheld rangefinder on hand at all times. But having a rangefinder doesn’t always result in the opportunity to get an exact range at the moment of truth. Sometimes deer slip in unannounced, or they move after you’ve drawn for the shot. Sometimes the rangefinders themselves fail you. This is when having a flatter shooting arrow can mean the difference between a good, clean kill and a long night of blood tracking.

There is also the issue of deer “jumping the string.” Will a heavier arrow give deer more opportunity to move prior to the arrow reaching its intended target? Perhaps, but even the fastest shooting bows can’t beat a deer’s ability to hear and react to the shot. A slower arrow could potentially give the deer more time to move, but one could argue that the quieter shot resulting from the heavier arrow would make the deer less likely to react in the first place. I don’t know of any real research that has addressed those questions at this point, and my experience is limited to a single season shooting heavier arrows. I can attest that none of the three deer I killed last season reacted to the sound of the shot, but to be fair, all three were within 20 yards when I released an arrow.

As we’ve outlined above, there are pros and cons to heavier arrows. Like many things in life, the best results will likely come from a happy medium of weight and arrow speed. The trick is finding the setup that gives you consistent passthroughs, even if arrow placement is less than ideal, without sacrificing any more speed than necessary. The exact weight is going to depend on a lot of variables such as the poundage, draw length, and efficiency of the bow you shoot, as well as the diameter of your arrows and the size and configuration of your broadheads. In a previous article on our website, Momentum Beats Speed for Lethal Arrow Hits, author Bill Bagley recommended the following as a starting point for arrow weight:

Dr. Ed Ashby recommends a much heavier setup for maximum performance, starting at 650 grains for deer-sized animals. For my personal setup, I found myself somewhere in the middle of those two trains of thought. I shoot 570 grain arrows from my 65-lb Mathews VXR with a 30-inch draw length. I have no idea how fast my bow shoots with that setup, and it really doesn’t matter to me. I was extremely satisfied with my results last season, getting complete passthroughs on both of the bucks I shot. I even used the same weight arrows from my 40 lb recurve and got a complete passthrough on a mature doe as well. The key is to try some different arrow setups from your bow, and find what works best for your application. Good luck this season!