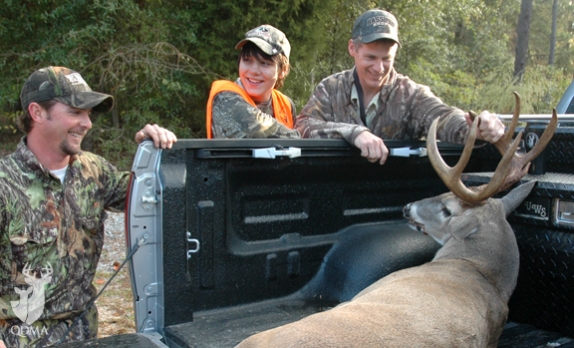 Every year we compile deer harvest estimates by state in our Deer Report and release them to the hunting public, and every year we receive multiple responses that go something like this:

“Those numbers can’t be accurate. I’ve never been asked how many deer I killed.”

It’s a common and perennial response, so here’s an explanation of how your state agency can have an accurate estimate of the deer harvest even if they didn’t talk to you, examine your deer, or require you to tag it. It’s possible through the science of random sampling.

Some states may be small enough or have a short enough deer season to physically count and examine every deer at mandatory check stations. But wildlife agencies in most states, like my home state of Georgia for example, cannot do this. Lengthening seasons, large land areas and massive numbers of hunters make it impractical. Instead, they use a survey method – usually a phone or mail survey – to randomly sample hunters and estimate things like days spent afield, harvest numbers, and species hunted. To get statistically accurate results with low margins of error, all you have to do is survey a large enough sample. Wildlife agencies do not have to survey anywhere near 100 percent of hunters to get a valid estimate of the harvest, an estimate that is more than adequate for tracking trends and making statewide management decisions. In fact, you might be surprised how few it takes to get a sound estimate.

Allowing respondents to choose to participate in a survey is one of the best ways to destroy the accuracy of results. In an open survey, people with an axe to grind are more likely to participate so they can make sure the agency knows they are angry.

Using an online random survey calculator, I ran my own numbers for Georgia, which has a population of around 250,000 resident and non-resident deer hunters. I would only need to randomly survey about 2,500 hunters (1 percent of the population) to get results with a margin of error as low as 2 percent, and be 95 percent confident in that error rate. Try the calculator for yourself. You’ll see that the smaller the population you are surveying, the higher the percentage you must survey to maintain accuracy. If your population includes a total of 100 people, you will have to survey nearly all of them to get the same level of accuracy you can get by surveying only 1 percent of Georgia deer hunters.

So, if my home state obtains random survey results from 2,500 hunters, they have an excellent idea how many deer were killed (Actually, Georgia WRD provides their survey information online, and I learned they annually survey exactly that number: 2,500 deer hunters).

No, they do not know the exact number of deer killed. No state knows that, but they don’t need to. They can get close enough to make statewide management decisions. More importantly, if the survey is conducted the same way each year, they get an excellent idea of trends in deer harvest. Knowing whether the deer harvest is climbing or falling over a period of years, and by how much, is more useful and important than knowing the exact number that were killed in any given year.

It’s important to note the word random throughout this discussion. People included in the survey must be chosen in a completely random manner or the results will not be accurate. Allowing respondents to choose to participate in a survey is one of the best ways to destroy the accuracy of results. In an open survey, people with an axe to grind (like those who aren’t happy about their recent deer hunting success) are more likely to participate so they can make sure the agency knows they are angry. People who are satisfied with their experience aren’t near as motivated to speak up through a survey. That’s how poll results become biased.

Some state agencies use random sampling to measure other things, too. For example, NDA includes age estimates of the buck and doe harvests in the Whitetail Report for states that collect age-based data on their harvests. Again, they do not pull a jawbone from every deer killed in the state, nor do they need to. If biologists randomly visit deer processors or check stations during deer season and pull jawbones from all the deer they find, and do this throughout the state and throughout deer season, they can easily pile up a large enough sample to get an accurate look at the age distribution of the harvest – even though they didn’t age your deer.

Let’s be clear: I’m not claiming every wildlife agency has an accurate grip on their deer herd and harvest levels, nor do I defend or know the error rates of any given state’s survey data (If you want to know survey method, sample sizes, and margins of error, I suggest you ask your state’s Deer Project Leader). I am saying it is possible for an agency to have reliable estimates even if they never surveyed you, made you tag your deer, or asked you to check your deer by phone or at a check station.