How Many Fawns Does the Average Buck Produce? 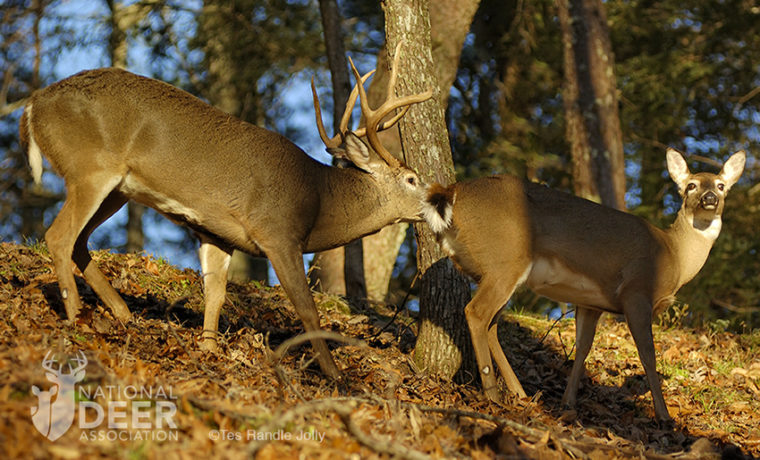 Forty-two is the number that comes to my mind when I’m asked this question, but not because it’s accurate or has anything to do with deer. Instead, “42” is the line from Hitchhiker’s Guide to the Galaxy, the answer to “….the ultimate question, the meaning of life, the universe and everything….”.

I know, it sounds flippant. However, if I used the time-honored academic response of “it depends,” the answer wouldn’t be any more satisfying. I would love to give you a clear and concise response, but this simple question has a highly complex answer. I’ll explain the difficulty of finding a simple answer to this question, but along the way you’ll learn the best of our knowledge about deer breeding success.

No Easy Way to Find the Answer

Research on wild deer populations is full of uncertainties. One of the main challenges is collecting samples. To understand deer breeding success, we have to sample DNA from potential parents as well as their offspring. It is impossible to sample 100% of the deer in most natural populations. As a result, we probably underestimate the true number of breeders and offspring produced.

During some of our initial work on buck mating success at the King Ranch in Texas, we confirmed that one especially large-antlered buck was a successful breeder. Unfortunately, we had the embryos to prove it!

The timing of sample collection presents a different type of challenge. If we want to know how many does that a buck breeds each year, we can harvest does in the late season and sample DNA from both the doe and from the embryos she carries. This approach also gives us insight into timing of conceptions relative to the rut, which in turn can tell us something about the level of competition among bucks. We know the rate of growth for deer embryos, so we can estimate conception dates for each litter by measuring the embryos and converting this to calendar days.

For instance, we have documented that adult bucks (3½ years old and older) sire most fawns, but young bucks (1½ to 2½ years old) collectively may sire from 15 to 25% of all fawns produced each year. From the conception date information, we found that young bucks are most likely to be successful during peak rut, when the greatest number of does are in estrus at the same time, and thus there is less overall competition for mating opportunities (see chart below). 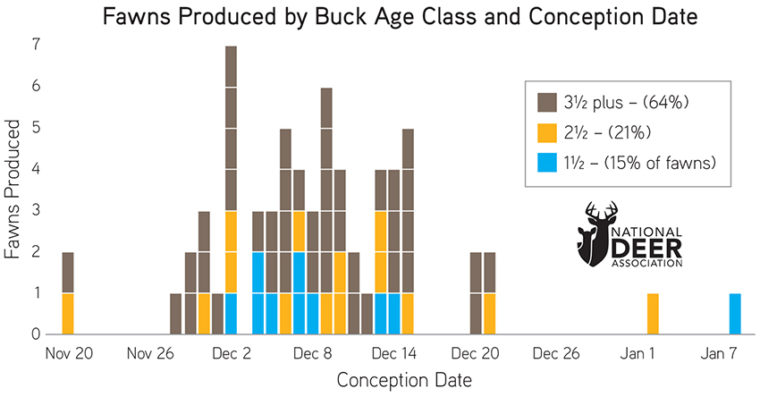 The embryo samples also allow us to document that whitetails can be highly promiscuous. Most adult does produce twin fawns each year, and up to 50% of those “twins” actually have different dads.

The embryo samples provide a fascinating window into deer behavior. However, the sampling is destructive in that it requires us to remove both the doe and the young. Therefore, we not only erase the buck’s contribution to the next generation, but there are only so many does we can harvest each year and maintain a viable population. Of course, we also erase the doe’s contribution, which may be equally important, though harder to assess since does do not grow antlers. During some of our initial work on buck mating success in cooperation with Mickey Hellickson at the King Ranch in Texas, we confirmed that one especially large-antlered buck was a successful breeder. Unfortunately, we had the embryos to prove it!

If we sample DNA from live deer, we can avoid some of the problems with the embryo sampling, but now we have lost the ability to estimate conception dates. The age that live deer are sampled presents additional challenges. More than half of all fawns born each year do not survive; these are the unfortunate victims of predation, illness, abandonment, or simply bad luck. If our earliest sampling opportunity is in the fall or winter, we won’t be able to sample many fawns. This can be okay because we may be more interested in the fawns that do survive and become part of the population. However, we will unavoidably underestimate the number of does a buck mates with because many of the offspring will die of natural causes before they can be sampled.

It is clear that due to natural deaths and other factors, most individual deer don’t do much more than replace themselves.

A further complication is that young bucks will disperse from their birth range and set up a new range, sometimes many miles away. This usually occurs by 2 years of age and is nature’s way of avoiding inbreeding. In fact, the behavior works very well for maintaining genetic diversity. However, we lose the opportunity to include these individuals in our analyses if they disperse before we can obtain samples.

Therefore, if we really want to understand how many offspring a buck contributes to the population, we need to satisfy several conditions. First, we need an intense sampling of live deer by capture or other means. Second, we need a long-term study so we can follow individuals throughout their lifetimes. Third, we need an enclosed or game-fenced population. Clearly, these are conditions that are not easy to meet. Furthermore, we risk disrupting natural behavior by having deer enclosed, we risk injury or death of the deer during capture, and so on. The more intensely we try to study a behavior, the more we risk disturbing the system. This is the biological equivalent of Heisenberg’s Uncertainty Principle in physics, which states that one cannot measure both the position and velocity of a particle exactly because the act of measuring one disturbs the other. Because our attempts to measure the system affect the results, it is hard to know all of these things: how many does a buck breeds, how many fawns survive to be sampled, and how many grow up to enter the population.

I can leave you with some results from a long-term study at the Noble Foundation that spanned 1991–2001. In collaboration with Ken Gee, John Holman, and Bob Gonzales from Noble, Steve Demarais at Mississippi State, and Rodney Honeycutt at Texas A&M, we analyzed deer parentage in an intensely sampled 3,000-acre management area. Our DNA samples came from deer captured or harvested on the area, as well as shed antlers and bones found from natural deaths. The site was surrounded by an 8-foot electric fence that discouraged deer movements. During this time period, some deer were adults when the study began, others were born during the study – this includes all deer sampled, subject to all of the qualifiers and uncertainties mentioned already. We did not sample 100% of deer or offspring, but we got a lot of them.

It is clear that due to natural deaths and other factors, most individuals don’t do much more than replace themselves over a long period of time – we found that over 60% of bucks and over 50% of does that were successful breeders only produced one fawn that survived at least 6 months. This makes sense, because otherwise we would all be neck-deep in a sea of deer. A smaller number of individuals – both bucks and does – have many offspring. Our maximum was 12 achieved by one buck and 7 achieved by one doe. Many deer produced no surviving offspring, especially those that were shot before the rut! 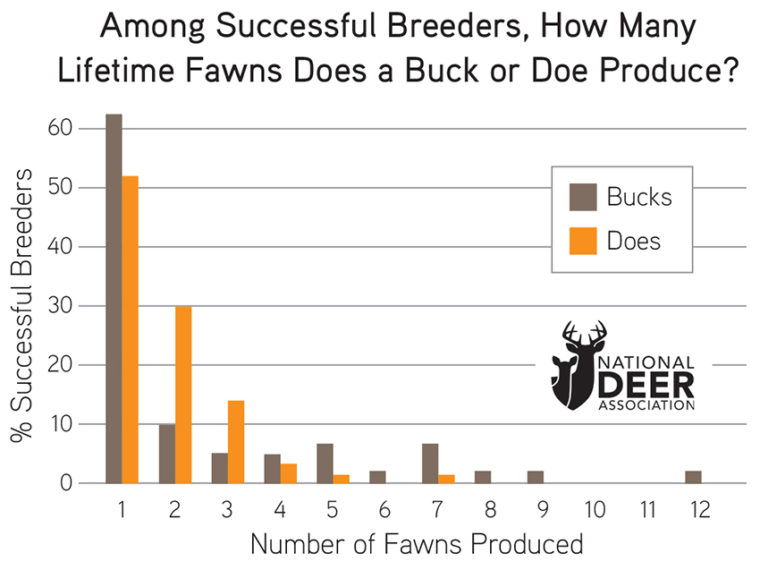 Most bucks and does don’t do much more than replace themselves. A long-term study showed that 60% of bucks that are successful breeders – the majority of them – only produce one fawn that survives at least 6 months in their lifetimes. The maximum found for one buck was 12 fawns.

Clearly, studies of breeding success in wild populations are not trivial. We have learned much about deer mating behavior during the past 10 to 15 years. There is still much to learn. We can’t easily predict which bucks are mating and which ones produce fawns that survive. These questions are not easy to answer. However, the longer a buck survives, the more chances he gets to breed and to become an ancestor – as long as some biologists don’t come along collecting embryos!

About the Author: Dr. Randy DeYoung is a research scientist and professor at the Caesar Kleberg Wildlife Research Institute at Texas A&M-Kingsville. He earned his Ph.D. at Mississippi State University studying parentage, mating behavior, and genetic structure in white-tailed deer.

View all Articles By Randy DeYoung