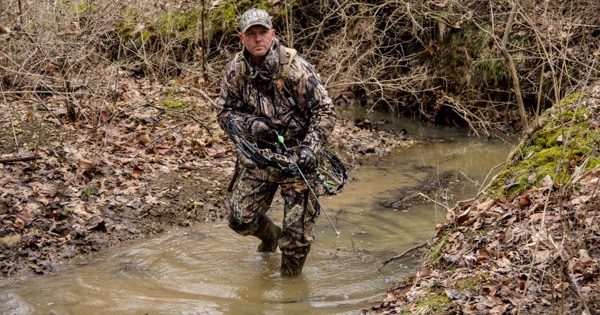 If you’re a deer hunter who is active on social media, particularly if you consume hunting content on YouTube, you’ve likely noticed the increasing popularity in public land hunting and the sharing of public land hunting videos. This shift in hunting media has resulted in the rise of several popular YouTube channels like The Hunting Public, Dave Owens’ Pinhoti Project, Jonathan Boehme’s Catman Outdoors, Dan Infalt’s The Hunting Beast, among others.

These new media outlets have not only changed the way we consume outdoor video, but they’ve also brought with them a shift in the public land hunting paradigm, popularizing a more aggressive style of hunting. But while The Hunting Public and others may be bringing this aggressive style mainstream, it is by no means a new idea. It’s all part of what is often referred to as “beast-style hunting” that traces back to guys like Dan Infalt and John Eberhart, who have been using these tactics to kill big, mature bucks up north for decades with little fanfare.

As someone who primarily hunts public land, I’ve found myself binging a lot of this new content over the last two years and have been incorporating some of the tactics into my hunting routine. For me, it’s made my hunting more enjoyable, and I am learning more about the areas I hunt and the animals that inhabit those places than I have in many previous years of hunting. So what exactly does this newly popularized hunting style involve? Let’s take a look at some of the key aspects.

For decades, much of the popular outdoor media has focused on the same general strategy: locate bedding, locate the current food source, then set up on a trail somewhere between the two. Getting too close to bedding or going into bedding areas was taboo. What we are seeing today, though, is that public land hunters can be very successful by getting more aggressive and actually hunting those bedding areas.

“You have to hunt the deer where they are, not where you hope they’re going to be,” Zach Ferenbaugh of The Hunting Public told me in a recent  interview for my Georgia Afield Hunting Podcast. “Food patterns can change from day to day, but they aren’t likely to change where they’re bedding.”

It seems that many hunters avoid bedding areas because of the fear if they bump deer, it’s going to ruin the spot altogether. And while that is certainly a possibility, Zach and The Hunting Public crew have shown that it’s not always the case. Their channel has featured hunts where they use a technique called “bump and dump,” which involves bumping a buck out of its bed, setting up, and then killing the buck a short time later when it returns to the area. That’s not to say every hunt involves getting in the middle of a bedding area, but those areas are nearly always the focal point of the setup. To see The Hunting Public guys take a nice Nebraska public land buck in a bedding area, check out the video below.

HUNTING OUT OF THE WAY SPOTS

It’s common knowledge that one of the best ways to be successful hunting public land is to hunt where other hunters won’t. Over the years, many hunters have taken that as “I have to walk further than everyone else.” But this new public land hunting media is proving that’s not necessarily the case. For some, like Dan Infalt, getting off the beaten path may mean wading through a Wisconsin marsh to get to a small island of dry land where bucks are bedding. For others it means using a canoe or kayak to access tracts of land that would otherwise take a long walk or that may not be accessible on foot. In some cases, it may not be a long or difficult trek at all. Sometimes the overlooked spots are right by the road, but are overlooked because there is no designated parking area nearby or no good trees to put a treestand in (more on this later). In one episode of The Hunting Public, they found an overlooked spot where deer were crossing a gravel road in a low spot. They went in and set up a short distance off the road where they could watch trucks passing by throughout the day. However, that didn’t stop a beautiful, mature 10-point buck from making its way across the road and right into the hunters’ setup. Check out The Hunting Public video below to watch this hunt unfold.

Another aspect of this new public land hunting paradigm is staying mobile and rarely hunting the same spots more than a few times the entire season. The research is clear that deer react quickly to hunting pressure, which is likely why when you see a big mature buck harvested on public land, it’s often on that hunter’s first sit in that particular location. By staying mobile, you keep pressure down in any one area, and it keeps you from wasting limited hunting time in spots that aren’t producing.

In my first season of really putting this into practice, what I’m also finding is by hunting so many different locations on a tract of public ground, I am gaining a lot more intel for future seasons than I did in the past when I hunted the same handful of spots over and over. In some cases, I am simply eliminating unproductive spots, while I’ve also discovered numerous bedding areas, particular feed trees that the deer seem to prefer at certain times of the season, as well as narrowing down specific travel patterns the deer are using. Even if this tactic doesn’t produce a mature buck for me this season, I will be much more prepared heading into the next one.

Another aspect to staying mobile that many of these new-style hunters have embraced is getting away from the constraints of traditional treestand or ground blind hunting. That’s not to say they aren’t still using both, but they don’t limit themselves to any one style of hunting. If you spend any time on social media, you’ve likely noticed this trend with the saddle hunting craze that seems to be sweeping through the hunting industry. Again, saddle hunting isn’t something new. There are a handful of hunters out there who have been successfully hunting from saddles for decades. But apparently all it took was the right people taking notice and being active on social media to bring saddle hunting to the forefront of the hunting industry. Many of these public land hunters have taken to saddle hunting because it allows for a more lightweight setup, making it easier to pack deep into the woods, and gives hunters the flexibility of hunting from most any tree. Check out the video below to see Jonathan Boehme of Catman Outdoors describe his saddle hunting setup.

But what do you do when even a saddle isn’t an option? This is often the case in swamps, large expanses of CRP fields, young clearcuts, or other early successional habitat. In these cases, some of these new-style public-land hunters are simply hunting from the ground, utilizing natural cover to stay concealed. If you’ve watched The Hunting Public guys at all, you’ve undoubtedly seen them use ghillie suits to stalk and ambush some good bucks. You may have even seen Dan Infalt of The Hunting Beast pack in a camouflage step ladder to hunt elevated in a cattail marsh.

My biggest takeaway from today’s new public land hunting paradigm is not that you have to go to extreme measures to kill a big buck, but rather that it’s okay to step outside of those long-held traditional deer hunting tactics. Don’t be afraid to think outside the box and don’t allow yourself to get in a rut of doing the same things over and over if you aren’t getting the desired results. I’ve embraced the change this year, and while I haven’t filled a buck tag at the time of writing this article, I can’t begin to tell you how enjoyable this season has already been and how it already has me looking forward to putting my new-found knowledge to use in future seasons. And in the end, that’s really what hunting is all about.