How to Bore-Sight a Rifle: No Tools Required 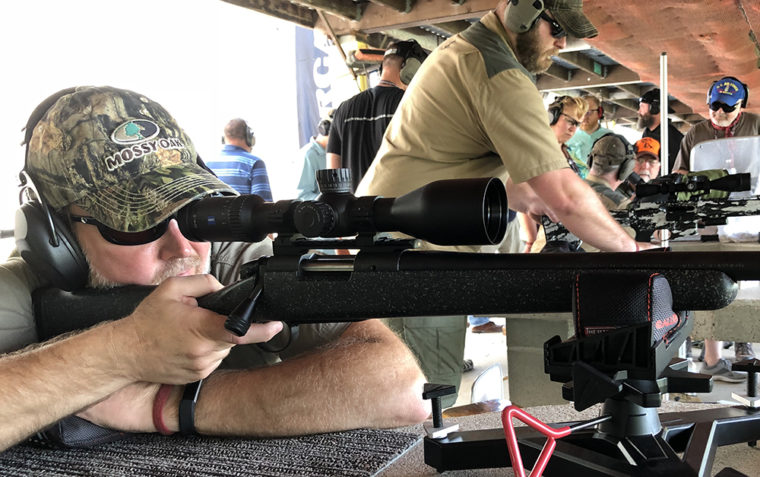 Save time and expensive ammo by using this simple method to bore-sight a rifle. No special tools required!

I recently talked with a hunter who purchased a new rifle with a scope and two boxes of expensive hunting ammo. At the range, he used up the expensive ammo but did not ever once hit his 100-yard target. If he had bore-sighted his rifle first, his initial shot at 100 yards would have hit the target.

Bore-sighting is the process of centering a target through the rifle’s open bore with your eye while simultaneously centering the same target through your scope. This process aligns the rifle’s barrel with the scope making zeroing the scope at the range much easier. Laser bore-sighters are another way to align your scope. These lasers are very helpful with lever-action and semi-auto rifles.

Kenny Childree has zeroed many rifles over the years. By bore-sighting, he strives to zero a rifle in five shots or fewer. Lance Hopper is retired from the U.S. Army Marksmanship Unit and is a shooting instructor with One Shot Accuracy. Kenny and Lance shared their bore-sighting tips with me for this article. Here’s how to bore-sight the most common types of deer rifles, including bolt-actions and ARs.

How to Bore-Sight Bolt-Action Rifles

Step 2: Remove the bolt, look down the rifle’s bore and center it on the 25-yard target. A 3- to 6-inch orange circle placed on your regular zeroing target helps make it more visible through the bore. The secret to success is to have the rifle in a rock-solid rest and to keep the bore centered on the target as you adjust the scope.

If your scope reticle is left of the center of the target, adjust your windage knob to the left to move the reticle to the right. This process is the opposite of adjusting a bullet’s impact on the left of the target. Don’t worry about this detail because you will see the direction of the moving reticle as you adjust the scope. Since it is the opposite of how you normally adjust your scope, it feels odd the first time you do it. Adjust your elevation next. Your scope reticle now should be in the center of your orange circle.

Step 3: Your scope is now bore-sighted, and you are ready to fire your first shot at the 25-yard target. Remember, it takes four times the scope’s adjustment to move the bullet’s impact at 25 yards than it does at 100 yards. Thus, it takes sixteen 1/4-inch clicks to move the point of impact 1 inch at 25 yards.

Step 4: You want your bullet to impact 1-inch low from the center of the 25-yard target to be able to hit your target at 100 yards. Take a ruler to the range.

There are many factors that affect where a certain cartridge will impact at 25 yards with a 100-yard zero. There are ballistics programs that will give you the precise 25-yard impact. But the “1-inch low at 25 yards” rule of thumb will give you a 100-yard hit on your target almost every time with all types and calibers of center-fire rifle ammo. Then you can quickly proceed to finalizing your 100-yard zero.

Lance agrees with Kenny: “1-inch low at 25 yards” is the magic starting point for most deer rifles with scopes that are usually 1.75 to 2 inches above the bore. This measurement is taken from the center of the scope to the center of your rifle’s bore. For ARs and other rifles with scopes that are 2.5 inches or so above the bore, a 25-yard impact of 1.5 inches low will get you on target at 100 yards.

Left: First shot at 25 yards after bore-sighting. Right: First shot at 100 yards hits the target, and the second shot after scope adjustment is very close to a 100-yard zero.

ARs can be bore-sighted just like a bolt-action rifle. To bore sight an AR, detach the upper receiver from the lower and remove the bolt. It is helpful to have a friend adjust the scope as you hold the upper steady and keep the bore centered while observing the centering of the scope reticle. 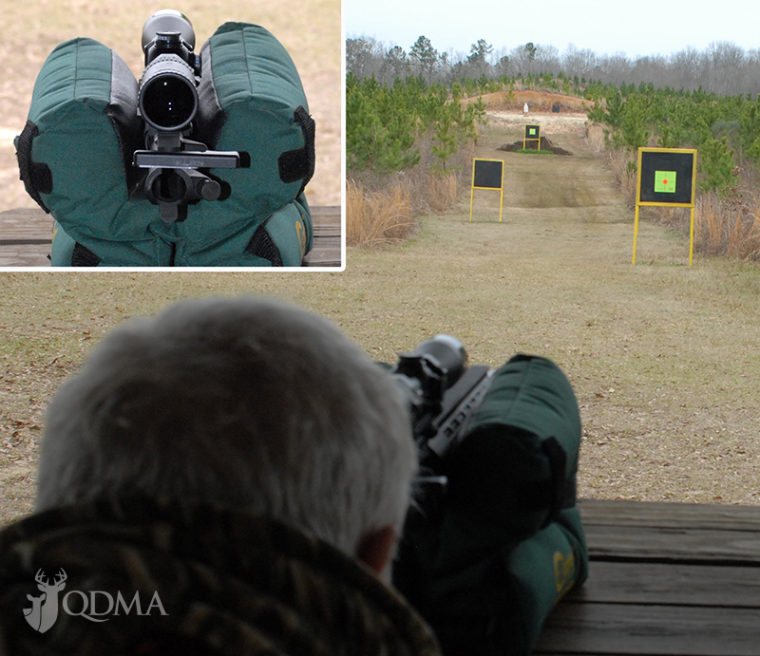 Kenny Childree bore-sights an AR at 25 yards. Placing the rifle in a solid rest is an important step when bore-sighting.

If you own a lever-action rifle but do not have a laser bore-sighter, start at 25 yards to zero your scope. If you do not hit the target at 25 yards, get a bigger target or get closer to the target until you have a hit. Then you can adjust your bullet’s impact until you are at the magic “1-inch low at 25 yards” before going to the 100-yard target.

There you have it: advice from the pros. Bore-sight at 25 yards and impact 1-inch low when shooting at 25 yards for most deer rifles. You should now be able to finalize your zero on the 100-yard target in just a few shots. Your trip to the range with your new deer rifle certainly will be more fun by first bore-sighting and confirming impact at 25 yards. Don’t forget the ruler!

About the Author: Walter Stroman is an NDA member and was the Team Adjutant for the 2005 United States F-Class Rifle Team that competed in the World F-Class rifle matches in South Africa. In 2007, he won the 1,000-yard Southeast Regional Rifle Matches, F-Class Rifle, at Fort Benning, Georgia. Read an additional article by Walter, 10 Shooting Tips From Army Marksmen.

View all Articles By Walter Stroman