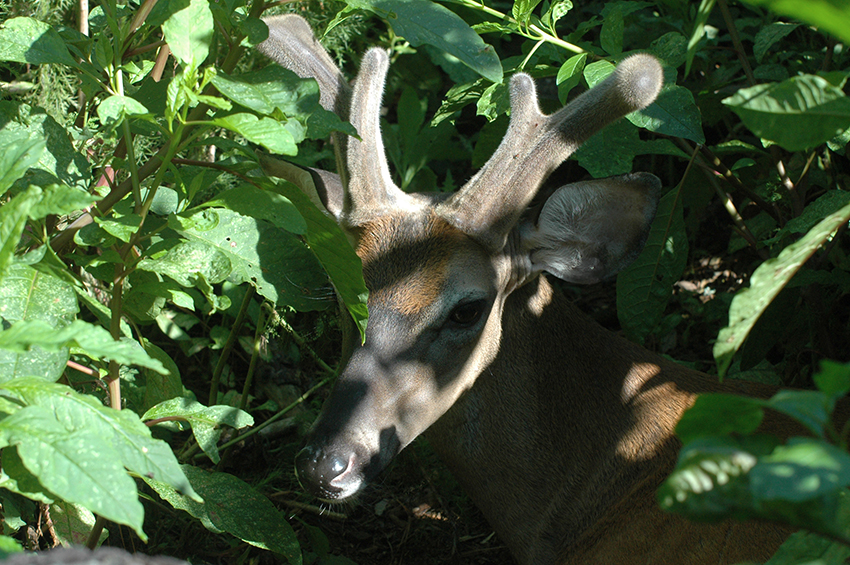 When you hear the phrase “thermal cover,” what’s the first thing that comes to mind? If you are like a majority of deer hunters, you likely pictured a south-facing hillside gathering winter sun, or a conifer thicket providing refuge from deep snow. You wouldn’t be wrong, as these features are incredibly beneficial to deer in winter, especially in northern climates. But do you know what those deer aren’t doing during those bitterly cold months? Growing antlers and lactating. For deer, keeping cool in summer is costly just like keeping warm in winter, which is why you should also create cover that helps deer work less at staying cool so they can spend that energy on growth.

As a wildlife biologist and professional habitat consultant, I work with landowners all over the whitetail’s range. When I’m conducting site visits with clients, few conversations receive more attention from habitat managers than when I start discussing the importance of summer thermal cover for improving a deer population.

For the same reason a deer seeks the sunny rays of south and east-facing hillsides on a cold December morning, they will relate to north and west-facing slopes on a warm June morning. It is energetically cheaper for a deer to reduce heat stress through behavior than physiology.

How you do you create patches of sumac? The most effective management practice would simply be to stop cutting or bush-hogging them!

Think about that. When we humans begin to encounter heat stress, our physiological response is to begin sweating. This adaptation allows for evaporation to dissipate heat and cool our bodies. Deer, like most mammals, cannot sweat. Instead, they are forced to pant, where the air is inhaled, humidified, and exhaled at a rapid rate. Think of your dog when you get back from a run – the evaporation occurring in the nose and lungs of your furry companion is cooling them from the inside out! While this method of heat dissipation works, it is not nearly as efficient as sweating. Therefore, it is much easier for a deer to change its behavior – relocating to a cooler location – than it is to pant in response to heat.

Jacob Dykes is a former student and now an Extension Wildlife Specialist at the Caesar Kleberg Wildlife Research Institute at Texas A&M-Kingsville. For his Ph.D. research, Jacob looked into whitetail preferences for shade. He placed captive research deer in holding pens with an array of overhead cloths producing varying degrees of shade: 0%, 30%, 60%, and 90% shade. The ambient air temperatures averaged 96° F during the trial period.

Jacob found that when ambient air temperatures were below 84° F, deer had no preference for any one gradient of shade. When temperatures rose above that 85° threshold, deer chose 90% shade over all other gradients 70% of the time (use of the four shade treatments from zero shade to 90% were 7%, 6%, 16%, and 71% respectively). On the average summer day, the deer where you hunt are likely to seek the highest-quality shade available. But there’s more to a quality heat refuge than shade. 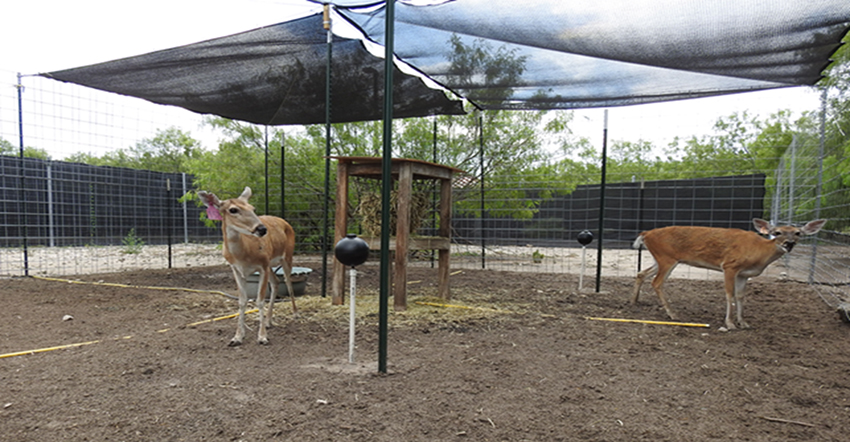 One of the research enclosures in Jacob Dykes’ study, showing the shade cloth. The black globes in the enclosure are specialized thermometers that measure not only ambient temperature but also air flow and solar radiation. Photo: Austin Killam.

Jacob’s research also investigated thermal impacts on free-ranging GPS-collared whitetails. He used black-globe thermometers scattered throughout the study sites to collect ambient air temperature, radiant heat, and wind to measure operative temperature. Operative temperature is a more accurate representation of the temperature an animal is experiencing under specific conditions. Results of this part of the study will be available in the future.

What Makes a Good Heat Refuge for Deer?

While sunlight is the most important factor in summer thermal cover, wind and proximity to water influence deer use of these summer thermal refuges. Creek bottoms, for instance, will usually contain shade and water but often lack substantial air movement.

Thermal cover isn’t just for summer. Think about an abnormally warm day in March. The deer have yet to shed their winter coats, and they are most likely facing a nutritional bottleneck that time of year before spring green-up. The last thing those deer are going to want to do is travel to your neighbor’s place to find a suitable place to cool off!

Yes, sumac. That “weed tree” growing around your barn that you bushhog every summer. The same sumac that seemingly grows everywhere you don’t want it to grow. I love sumac, and deer use these native shrubs – especially winged, smooth and staghorn sumac – more than just for the fruit or as a source of woody browse in winter.

The reason I love sumac thickets so much for summer thermal cover has less to do with the nutritional value of the sumac and everything to do with the structure of the thicket itself. For those of you who are unfamiliar with the growth structure of a sumac shrub, picture a long, slender, single trunk with a small crown space consisting of a few dozen compound leaves. A single sumac tree by itself is nothing impressive, but when you have 50 to 100 or more of these tropical-looking trees all clumped together, you have yourself the perfect place for a deer to bed down and escape heat. 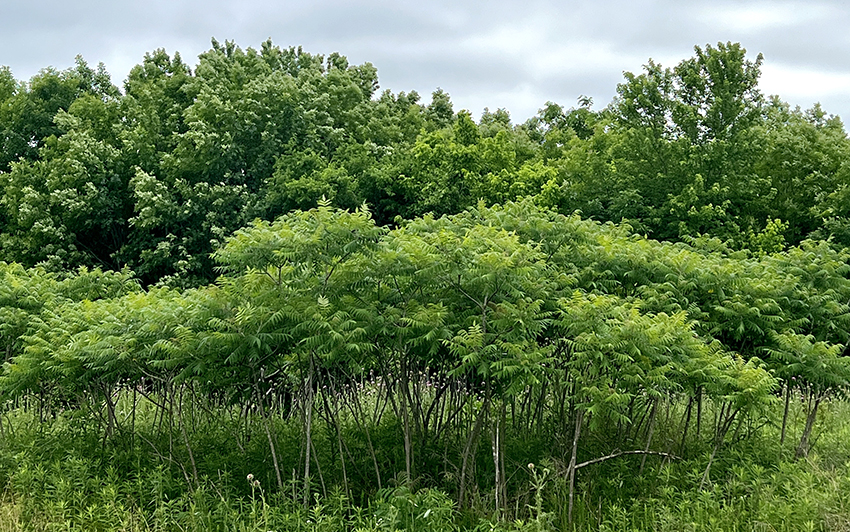 Sumac thickets like this one provide excellent heat refuges with overhead shade but also airflow and a view of approaching danger. Several species of sumac are found throughout the whitetail’s range.

Because of their slender trunk and top-heavy leaf structure, sumac has a difficult time standing erect without the support of its neighbors. They need the external support so much so that the sumac trees around the perimeter of the thicket will fall away from the thicket center, forming a dome-like structure for the thicket as a whole. In the same manner you hear biologists talk about annual ragweed having an “umbrella-like” structure for quail and turkey poults, sumac thickets create an umbrella-like structure for deer. The narrow trunks and limited bulk of the canopy create a nice shady area, yet the trees themselves are sparse enough to allow for adequate wind to pass through the thicket. Shade with a breeze and a view. What more could you ask for in the heat of summer?

How you do you create patches of sumac? The most effective management practice would simply be to stop cutting or bush-hogging them! Sumac thrives in full sunlight and “old field” areas. If you notice young sumac trees trying to establish in your old field, consider spraying a grass-selective herbicide around them to encourage a quicker growth rate by reducing surrounding competition. Check if your state has nurseries that sell native sumac seedlings, or collect some seeds in late summer and grow your own seedlings for planting next year.

Sumac fades out as taller trees begin to shade them, so maintain this early successional cover in young stages by using prescribed fire, mowing or forest stand improvement (FSI).

Remember, you are trying to promote structure at ground level while keeping a majority of the canopy closed to provide shade, so don’t go too crazy with your chainsaw! There is a fine line between adding structure and reducing the amount of shade the area will produce. While my goal for winter thermal cover cuts is 80% sunlight, my summer thermal cuts are the inverse of that. I don’t want more than 20% of the canopy opened up. Focus your efforts on the mid-story trees that won’t affect shade quality on that site.

If you are fortunate enough to be managing a piece of property with running water on it, count your blessings! Creek bottoms are typically well-shaded, offer a reliable water source except in extreme drought, and have the added benefit of consistent swirling winds. While these swirling winds are a headache to hunt, they offer relief from biting insects and otherwise stagnant summer air.

A great management technique for these creek bottoms will be to hinge cut along the borders of the creek. I prefer hinge-cutting to felling trees in these riparian zones so that the structure doesn’t float away the next time the river or creek floods. Remember what I said above about not completely opening the canopy up to sunlight but rather adding horizontal structure where possible. Shade quality is more important than the size of the area covered.

A quality summer heat refuge can take many other forms than these few I mentioned. By studying shade and air flow patterns where you hunt, as well as signs of deer use, you might identify refuge areas even if you don’t have sumac thickets, north-facing hillsides or a creek bottom. It might be the shade beneath that big old oak on the hill, where native grasses are growing tall and producing cover. Or even that abandoned barn in the middle of an old field. 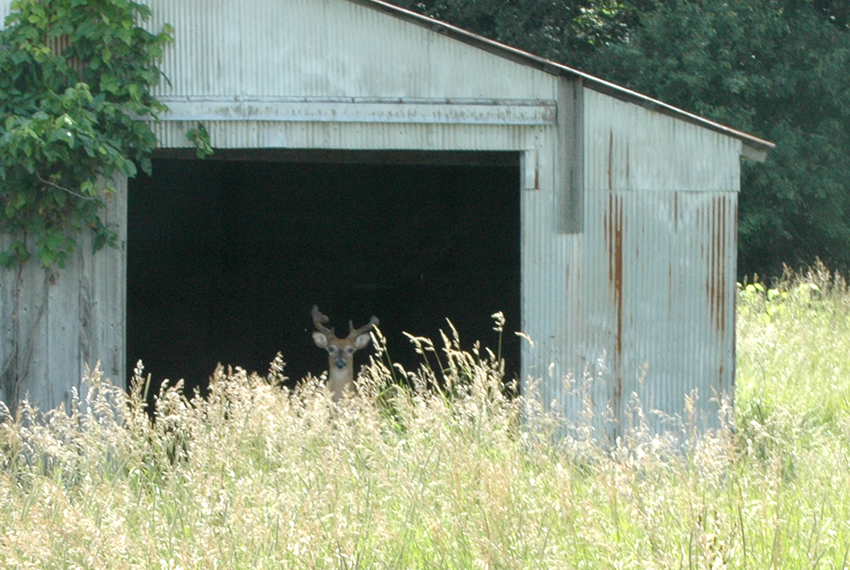 The next time you walk the land you hunt in the heat of summer, consider slowing down and spending a few minutes looking for existing thermal refuges. If a spot feels cooler to you, it will feel cooler to a deer as well. If you discover conditions that are attracting deer to use such refuges, protect them from human activity and rotary mowers to enhance their attractiveness.

Next time you curse the summer heat and humidity, remember the stress it is also putting on the deer herd. Increased stress of any kind negatively affects a buck’s ability to put on antler growth and a doe’s ability to nurse and raise healthy fawns. Do you offer adequate thermal cover throughout the calendar year? Summer is the time to evaluate the amount and quality of summer thermal cover where you hunt, and if it is lacking, make your plans to ensure there’s more of it next summer!

How to Defeat Herbicide Resistant Weeds in Deer Food Plots

Weed control is one of the most important considerations to produce high-quality food plots, and herbicides are the most effective and efficient tool to reduce weed competition. Unfortunately, several weeds have developed resistance to some…