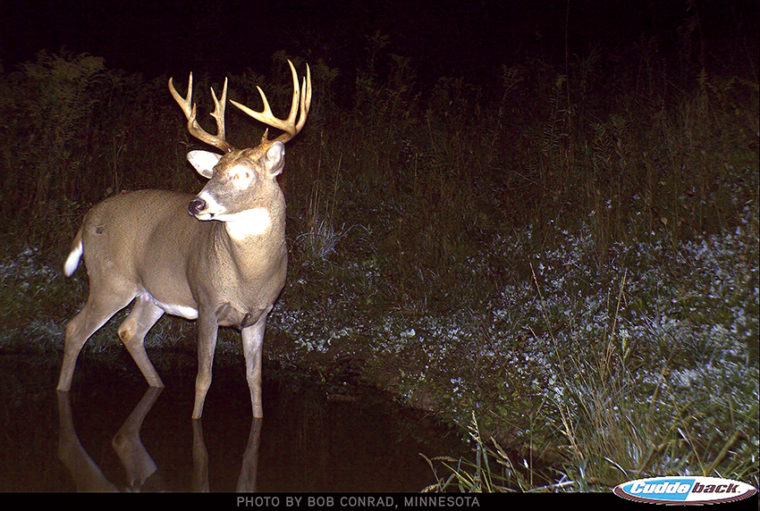 Deer season has barely ended, and I’ve already begun planning for next season… by going back in time and reviewing last year’s trail-camera photos.

Winter weather in my home state of Pennsylvania is often less than ideal for spending time outdoors. And let’s face it, putting in some family time to bank brownie points for next season is a must. With that, I move much of my winter scouting indoors. With modern technology, there is no shortage of indoor scouting opportunities to assist in planning next year’s strategies or developing an updated target buck list. I use the onX Hunt app to view new properties, and I revisit trail-camera pictures from previous years. As I write this, I’m looking at bucks who have made it through the Pennsylvania gun season to get a sense of their behavior from this past season.

I typically don’t put much stock in summer trail-camera images because buck movement patterns can change so much from summer to fall, and bucks begin to cover a lot more acreage during the rut than they do in summer. Summer patterns can sometimes help with strategy in very early archery seasons but not so much once the rut becomes a factor. I also filter out any fall photos of bucks that only appear minimally. There just isn’t enough context from a few summer or fall photos to give me confidence I can successfully hunt any of those deer. I’m looking for deer that I have a history with or that are showing up often enough to catch my attention. 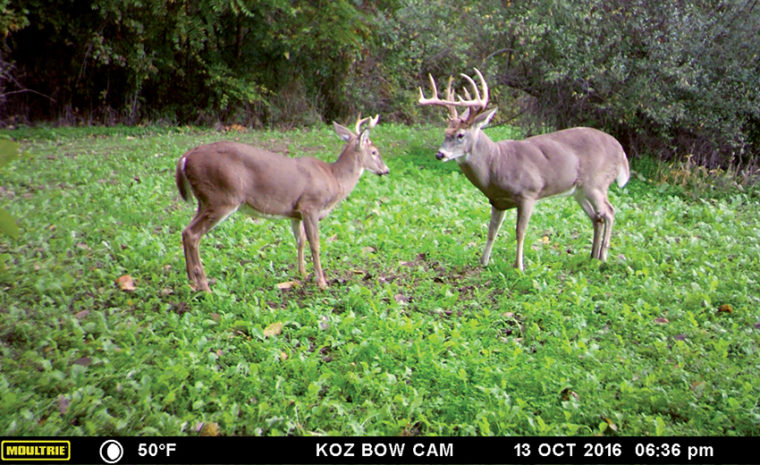 Patterns from last year can be valuable as long as most other conditions are equal. For example, if food sources like food plots change year to year, deer movements may also. Photo: Ken Kozminski, Michigan.

I’m a firm believer that past behavior is a strong indicator of future behavior. It stands to reason that a buck’s previous routines would indicate his future ones. This is exactly why I often review the prior year’s trail camera inventory to formulate next season’s plan when I’m patterning a specific buck or targeting a few different bucks in a given season. The current images are used to confirm the identified buck is using his same historical core areas throughout the hunting season, and to target any new bucks for the upcoming year. The more historical data you have on a buck, the better your odds will be of harvesting him. You’ll usually get only one opportunity to do so, therefore the more you know about him the better. Here’s how I approach building a plan based on prior years’ trail-camera pictures.

Many hunters run inventory cameras during the summer and early fall to get a sense of the overall size of the deer herd and the buck “inventory” on a property they plan to hunt. Many then switch over in-season to using their cameras more strategically in an effort to dial in on fine-scale movements of specific bucks. I do the same. However, I also keep a handful of trail-cameras out year-round in typical inventory locations like food sources or major trails and travel corridors, especially late-season food sources, so I know which bucks have made it through hunting season and which will be potential targets for the following year. This can be particularly helpful in determining which food sources are most popular if you need to push into late season to fill your buck tag the next year. But more importantly, you can’t build next year’s strategy for a buck that wasn’t killed last season. Confirming they made it through is the first step. For monitoring purposes, I’d recommend leaving cameras out at least until antlers drop in late winter and early spring.

After I have an idea of which bucks have made it through the season, I’ll separately file the images of those I consider potential targets for the next year. I’ll then compare the most recent season’s buck images to those of years past to see if there is any previous history. The goal is to try to identify any “new” target bucks that actually appeared in photos from the previous season but weren’t obvious return visitors. With time to slow down and study photos in the off-season, I look for unique antler features such as unusually shaped brow tines or forked G-2s or body markings like scars or double throat patches. My goal is not only to identify and aggregate my data for specific bucks but also to accurately age each buck so I know which ones I want to hunt the following year. Having photos of the same buck from multiple years greatly increases your confidence in your age estimate. In my area of Pennsylvania, a realistic personal goal for me is to target bucks beginning at 3½ years.

Studying the previous year’s photos has changed the way I prepare for upcoming seasons. Since implementing this strategy, I’ve had more frequent shot opportunities with the caliber of deer I’d like to harvest.

If all of this photo sifting and sorting sounds a little overwhelming, know that there are cloud-based software tools that you can use to assist in organizing your data and images (or you can go old school and keep folders on your computer). I’ve used DeerLab in the past, and it has worked well. This tool will also create heat maps of where a particular deer has been most visible while pulling in weather conditions like temperature and barometric pressure, all from your trail-camera pictures. This level of information can aid in painting a clear picture of how a buck is using a property during various weather conditions and provide some clarity on where he may be bedding or feeding based on the time and direction he’s traveling.

Once I’ve identified a target buck and analyzed the top level trail-camera data, I begin to look at the photos with a more critical eye, particularly those placed in known travel corridors and pinch points. I search for clues related to travel direction, wind direction, day or nighttime movement, and how core use areas might have shifted as hunting season progressed. Often these clues are cause for more investigating, but that’s to be expected.

As I further scrutinize the information, I think about the still lingering questions in relationship to the land I hunt and how the information weaves a story. For example, if a buck is consistently traveling from the north an hour or two before dark toward a food source, chances are his daytime bedding area is north of the camera location. If I need confirmation of my assumptions once fall returns, I’ll often place trail-cameras closer to where I think a buck is bedding and tighten the radius of cameras around him to narrow his bedding and travel routes. 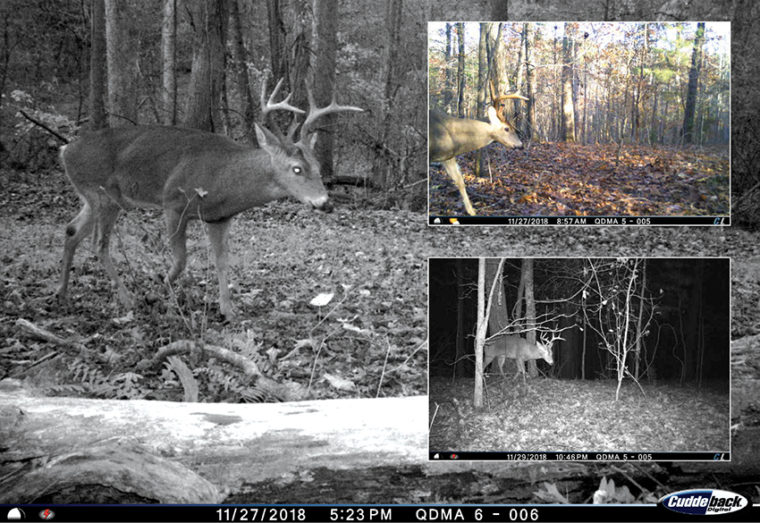 This adult buck showed up several times on the Cuddelink system at QDMA Headquarters in late November 2018, including daylight shots. A pattern like this can show you the best time to be in the woods next year as well as hints about a specific buck if he survived last hunting season.

I’ve also found running trail-cameras on video mode is a great tool to better understand travel direction. In addition to moving my cameras closer, I’ll use my onX Hunt app to look at topography and overhead imagery to narrow down areas that look like good travel corridors. This assists in identifying potential ambush points in relationship to where bucks are bedding and feeding.

Of course, it’s not all about bedding and feeding. It’s worth while to study your photos from the peak of the rut to see if you can learn where doe groups are traveling and bedding. Combining this knowledge with the buck patterns, and adding the landscape layer from your on-the-ground knowledge of cover and food, can bring your plan into sharper focus.

After examining all these data, I have all the information I need to plan my moves next season. I’ll choose a day with good weather and an “almost right” wind for him to use a particular travel corridor and hope my planning pays off.

Putting it All Together

In 2018, I worked this plan to near perfection. I had watched a buck for two years as he reached the age of 4½. Through the previous two years of trail-camera images and three live sightings, I had aged this buck, identified his unique body and antler characteristics, narrowed down his daylight movements to only evenings, and determined where he was bedding. Using trail-cameras on video mode, I identified his typical travel direction and corridor and, ultimately, the particular pinch point where he’d be killable.

I had an encounter on opening day with this buck at 30 yards only to be busted by a younger sidekick he was traveling with that day. He avoided my arrow yet again, but he fell to my buddy’s bullet during rifle season.

Studying the previous year’s photos has changed the way I prepare for upcoming seasons. Since implementing this strategy, I’ve had more frequent shot opportunities with the caliber of deer I’d like to harvest. Even if I don’t fill my tag, I’m in a better position to season my tag soup with some great encounters.

About the Author
Clint Campbell of Pennsylvania runs the Truth From The Stand deer hunting podcast and blog, where he discusses deer hunting tactics and strategies with hunters from across the country. He also runs the Skull Brew Coffee Company, where customers can elect to donate part of their purchase price to non-profit conservation organizations like NDA. When not talking deer hunting, he can be found scouting public ground, planting food plots on his family’s Pennsylvania land, planning his next western adventure, or passing the hunting heritage on to his daughter.

Clint Campbell of Pennsylvania runs the Truth from the Stand deer hunting podcast and blog, where he discusses deer hunting tactics and strategies with hunters from across the country. When not talking deer hunting, he can be found scouting public ground, planting food plots on his family's Pennsylvania land, planning his next western adventure, or passing the hunting heritage on to his daughter.
View all Articles By Clint Campbell