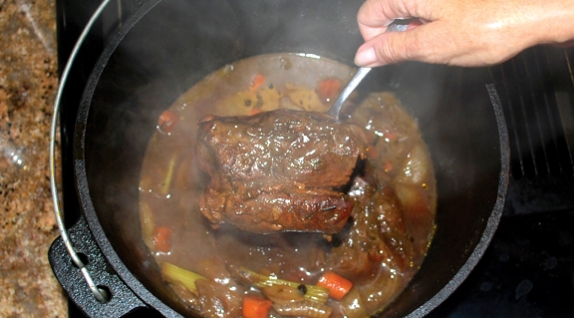 “There are white oak acorns all over the woodlot up the hill,” the landowner said when I arrived for a scouting session a week before Virginia’s Urban Archery Antlerless Season began. “That’s where I want you to hunt next Saturday morning because I have a father and son going squirrel hunting on my other woodlot.”

The gentleman was correct about the cornucopia of white oak acorns, but the problem proved to be that they were chestnut oak acorns – a white oak member, to be sure. But quite probably the nuts from this species are among a whitetail’s least preferred acorns, including not only those of its fellow white oak family members but also the red oak representatives.

I positioned my hang-on where I was told to do so but felt doomed to failure. Sure enough, on opening day, I spent a lonely morning watching chestnut oak acorns fall – not even the gray squirrels were interested in them.

I climbed down from my hang-on around 10:30 and decided to visit a different section of the property. In a small grove of hardwoods, I discovered several bearing white oaks; the deer sign under them spoke of recent visitations. Later, while visiting with the landowner, I asked if I could set up elsewhere for the evening hunt, and would I be the only one on the place that evening. He answered yes to both questions.

The evening hunt went as I had hoped and expected. Because of the September heat, no deer stirred until just a half hour before sunset, but when they did move, five of them appeared at the white oaks at the same time. My son-in-law David helped me butcher the biggest doe that Saturday night.

A cooking column is not the place to go into a detailed explanation of how to identify the acorns, leaves, and bark of the various white oak family members such as the post, chinquapin, chestnut, and the white oak itself or in what regions and habitat types they thrive in. But I can proclaim that many times when I locate post, chinquapin, and white oaks on my properties, I do some Timber Stand Improvement by cutting down other trees that are interfering with their growth. This often results in these white oaks spreading their crowns, receiving more sunlight and nutrients, and producing more acorns in the future. Indeed, my favorite one of the four QDM Cornerstones is habitat management, and TSI is my preferred way to make habitat improvements on my land.

I’m not plagued with indecision when carrying out TSI projects, but I admit to some serious vacillation when working on the gather part of this “Hunt and Gather” column. That’s because the subject is an invasive species – the wineberry, or Rubus phoenicolasius, which is native to Asia. On the one hand, I have observed turkeys nesting in a wineberry copse, deer browsing on both the leaves and berries, and various songbirds nesting in the vines and gorging on the sweet, red berries. Elaine and I also relish wineberries in pies, cobblers, and jam.

Conversely, no doubt exists that the wineberry needs to be aggressively controlled, says James Hancock, vice president of the Roanoke QDMA Branch and a professional land manager. Without a doubt, it is better for deer and other wildlife that we eliminate invasives like this one.

“Although wineberries are apparently quite tasty to wildlife and definitely tasty to us, they do negatively compete with our native Rubus species, such as blackberries, raspberries, and dewberries, especially the former two,” he said. “So it’s imperative that we should control wineberries.”

Hancock prefers the herbicide PastureGard, saying it is particularly effective as a foliar spray.

“I confess that sometimes when I come across ripe wineberries, I’ll pick a whole lot of them before spraying the plants,” he said. “I rationalize that I’m keeping birds from spreading the seeds found in the berries.”

My best wineberry patch lies on a neighbor’s property where last year Elaine and I picked nearly three gallons. The wineberries have taken over a long fence row on the property, choking out the native blackberry and raspberry vines. The neighbors don’t want the plants sprayed, and my spouse and I rationalize, like James, that by eating so many of their wineberries we are keeping this invasive from expanding its turf. Now, there’s a way to control invasive species – eat them!

While butchering my first deer of the season, I told Elaine I wanted one of the roasts cooked in our Coleman Dutch oven. Here’s the recipe Elaine used to do so, plus her wineberry cobbler recipe.

Check toward the end to see that batter does not over brown and that the center is not doughy. Sometimes the doughy center may need to be relocated to the outer edges.  If so, let the cobbler cook a few more minutes. 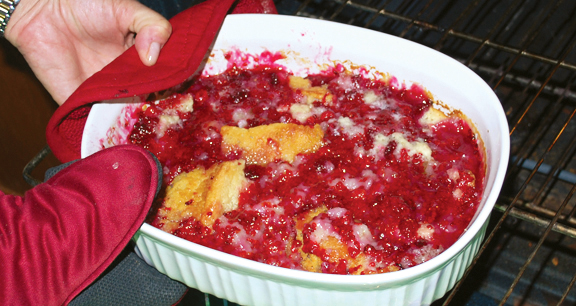 The carrots in the pot make a good side dish for the roast.