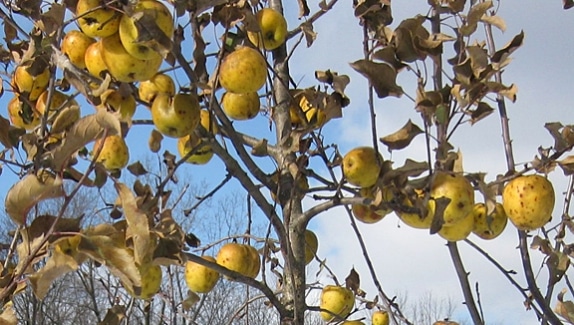 It was the weekend before the first Saturday of October, the traditional opening of Virginia’s archery season, and a friend and I had been searching my Potts Mountain land in Craig County for a stand site. The entire side of the mountain seemed to be filled with bearing oaks, and acorns crunched underfoot everywhere we stepped. So many acorns littered the forest duff that finding a hot food source among all those bearing oaks seemed hopeless.

Then my buddy experienced an epiphany.

“Forget about those oak trees,” he said. “Remember that old abandoned apple tree that we came across about an hour ago? Put your stand near there. Sooner or later the deer will get their fill of acorns and go there, and you’ll be waiting.”

Of course, an apple tree growing in the forest is not necessarily a hot spot unless it sheds its fruit during the hunting season. I am a fan of traditional American apple varieties, also known as “heritage” varieties, and when we arrived back at the tree, I took a close look at it. The tree was a Grimes Golden, which originated in West Virginia during the late 1790s, and which drops its fruit in September and October. Even better, the tree was full of the small, light yellow apples that characterize the Grimes Golden, and more lay about underneath. Apparently, the tree had been planted in the 1930s sometime before the family that originally owned the land had vacated it during the Great Depression. I had found my stand site.

My hunting records show that on Saturday, October 3, 1998 at 8:36 a.m., I made a 15-yard shot at a doe that was on her way to the Grimes Golden. Last spring, I planted a Grimes Golden on the land Elaine and I live on, and I expect the tree to be a deer magnet in about five years.

In recent years, QDMA members have been introduced to the phrase “apple tree food plots,” which means either planting an apple tree or two in an existing food plot or creating a small orchard and planting several different varieties there – varieties that have been selected because they drop fruit during the hunting season. In either situation, the Grimes Golden is an excellent choice for both us and wildlife.

My favorite attribute of Grimes Golden is a natural cinnamon-like flavor that is pleasingly sweet. This is absolutely my preferred variety to put in a daypack during early bow season. Grimes Goldens also make delicious pies but are equally good for frying, cider, and apple butter. Southern mountaineers recognized its value as an ingredient for apple jack, also known as moonshine.

But as versatile as the Grimes Golden is, Elaine and I like it best as the main ingredient in applesauce. Here’s Elaine’s recipe for Grimes Golden applesauce, and for the venison from a deer that might venture by an apple tree that you have planted.

This dish has a stew-like consistency that would go well on top of rice or pasta. You could add other items in the crockpot as well such as potatoes, mushrooms, or peas.

We like our applesauce chunky so at this time we stop cooking and store the mixture in the refrigerator until eating, but you can mash the sauce more finely if desired. You can also try additions such as cinnamon or vanilla. Elaine likes just a little cinnamon and no vanilla with her applesauce, while I like lots of both and a sprinkle of nutmeg. Experiment with both ways to see which you prefer. 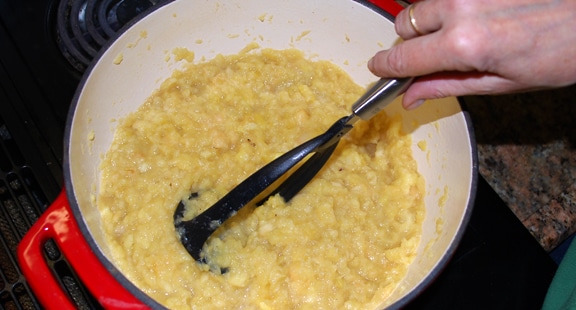